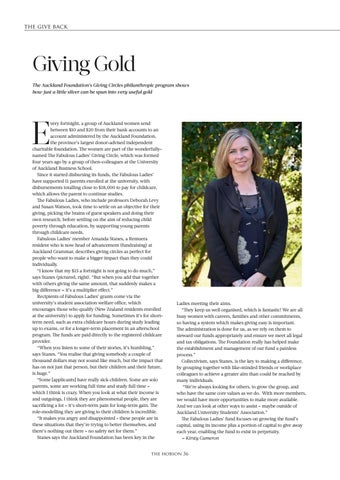 very fortnight, a group of Auckland women send between $10 and $20 from their bank accounts to an account administered by the Auckland Foundation, the province’s largest donor-advised independent charitable foundation. The women are part of the wonderfullynamed The Fabulous Ladies’ Giving Circle, which was formed four years ago by a group of then-colleagues at the University of Auckland Business School. Since it started disbursing its funds, the Fabulous Ladies’ have supported 11 parents enrolled at the university, with disbursements totalling close to $18,000 to pay for childcare, which allows the parent to continue studies. The Fabulous Ladies, who include professors Deborah Levy and Susan Watson, took time to settle on an objective for their giving, picking the brains of guest speakers and doing their own research, before settling on the aim of reducing child poverty through education, by supporting young parents through childcare needs. Fabulous Ladies’ member Amanda Stanes, a Remuera resident who is now head of advancement (fundraising) at Auckland Grammar, describes giving circles as perfect for people who want to make a bigger impact than they could individually. “I know that my $15 a fortnight is not going to do much,” says Stanes (pictured, right). “But when you add that together with others giving the same amount, that suddenly makes a big difference — it’s a multiplier effect.” Recipients of Fabulous Ladies’ grants come via the university’s student association welfare office, which encourages those who qualify (New Zealand residents enrolled at the university) to apply for funding. Sometimes it’s for shortterm need, such as extra childcare hours during study leading up to exams, or for a longer-term placement in an afterschool program. The funds are paid directly to the registered childcare provider. “When you listen to some of their stories, it’s humbling,” says Stanes. “You realise that giving somebody a couple of thousand dollars may not sound like much, but the impact that has on not just that person, but their children and their future, is huge.” “Some [applicants] have really sick children. Some are solo parents, some are working full time and study full time – which I think is crazy. When you look at what their income is and outgoings, I think they are phenomenal people, they are sacrificing a lot – it’s short-term pain for long-term gain. The role-modelling they are giving to their children is incredible. “It makes you angry and disappointed - these people are in these situations that they’re trying to better themselves, and there’s nothing out there – no safety net for them.” Stanes says the Auckland Foundation has been key in the

Ladies meeting their aims. “They keep us well organised, which is fantastic! We are all busy women with careers, families and other commitments, so having a system which makes giving easy is important. The administration is done for us, as we rely on them to steward our funds appropriately and ensure we meet all legal and tax obligations. The Foundation really has helped make the establishment and management of our fund a painless process.” Collectivism, says Stanes, is the key to making a difference, by grouping together with like-minded friends or workplace colleagues to achieve a greater aim than could be reached by many individuals. “We’re always looking for others, to grow the group, and who have the same core values as we do. With more members, we would have more opportunities to make more available. And we can look at other ways to assist – maybe outside of Auckland University Students’ Association.” The Fabulous Ladies’ fund focuses on growing the fund’s capital, using its income plus a portion of capital to give away each year, enabling the fund to exist in perpetuity. — Kirsty Cameron

We'll bee seeing you .... The Hobson is the bees' knees this October with our buzzy blend of local news, people and opinions. Enjoy! 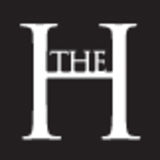