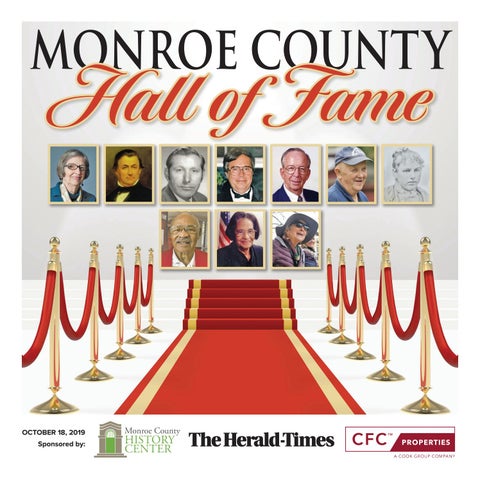 Since 1820, Indiana University has partnered with Bloomington and Monroe County to improve our community, the state of Indiana, the nation, and the world. The 2019 Monroe County Hall of Fame Inductees exemplify this partnership. You make our community stronger. 200.iu.edu.

en people have been inducted into the Monroe County Hall of Fame. The selections were made from nominations made by members of the public and Hall of Fame selection committee members themselves, who represent The Herald-Times, CFC Properties and the Monroe County History Center, the three sponsors of the Hall of Fame. Those inducted were: • Gayle Cook, who along with her husband, Hall of Fame charter member Bill Cook, founded what has become one of the leading medical device companies in the world. • Paris Dunning, who was a state senator and later was Indiana governor from 1848-49. • William “Bill” Hanna, who founded a successful trucking company and served as a member of the county commissioners. • Frank Hrisomalos, who at 57 years of service was the longest-serving physician in Monroe County. He also was a member of the City Board of Public Works and civic leader.

• Lloyd Olcott, who served four terms on the Bloomington City Council, 14 years on the parks board and had many other roles with key community boards and organizations.

• Joe Peden, farmer and educator, who in 1994 picked up the tradition started by his parents in 1953 of having school children visit the family farm to learn about agriculture. • Maud Showers, wife of Charles Jr. She became a partner in the Showers Bros. factory, women’s suffrage activist and community leader who helped start Bloomington Hospital and Monroe County (Carnegie) Public Library. • George Taliaferro, football all-American from Indiana University, who became the first African American player drafted by the National Football League and later worked for IU as an administrator. • Vi Taliaferro, former juvenile court judge and longtime advocate for children in Monroe County.

• Charlotte Zietlow, first female county commissioner, health advocate, women’s advocate and community leader whose name is on the Justice Building. The Monroe County Hall of Fame was launched in 1976 to commemorate the national bicentennial year. The mission was to recognize men and women who had made major contributions to life in Monroe County, or who went elsewhere to make contributions and brought pride and honor to the place they once lived. The project was developed by what was then The Herald-Telephone and College Mall Merchants Association. Ten charter members were inducted in 1976. Since that inaugural year, 60 more members have been named to the Hall of Fame from nominations sent in by H-T readers and voting done by members of the public. No new members of the Hall of Fame have been inducted this decade. The trio of sponsors decided to add 10 new members in celebration of the Monroe County Bicentennial, matching the 10 charter members inducted in 1976.

Congratulations! Congratulations and thank you, 2019 Monroe County Hall of Fame Inductees, for your remarkable contributions to our county.

trained doctor and lawyer in Bloomington before serving in the Indiana Legislature first as a state representative from 18331836, then a state senator from 1836-1840. Elected lieutenant governor in 1846 and served as governor in 1848 and 1849.

Portrait of Gov. Dunning by James Forbes from the collection of the Indiana State Museum and Historic Sites.

orld War II veteran and businessman, he founded a successful trucking company and served 12 years as a Monroe County Commissioner, including as president during that time.

ivic leader and the longest-serving physician in Monroe County. Also served on the City Board of Public Works and as a director of many local nursing homes. He saved lives, gave meaning to lives, and made a difference in so many lives.

usinessman, civic leader and Korean War veteran. Served four terms on the Bloomington City Council, 14 years on the city parks board and many other roles on key community boards and organizations. He was a leader in the renovation of the Shower’s factory, now City Hall.

armer and educator who in 1994 picked up the tradition started by his parents of hosting local school children at the annual Peden Farm Children’s Farm Festival to learn about agriculture and experience life on a family farm.

usinesswoman, civic leader, philanthropist, activist for the women’s suffrage movement, and wife of Charles Showers Jr. She became a full partner in the Showers Bros. Furniture Co. when she was widowed at age 23. She led the Local Council of Women to found the Bloomington Hospital and was instrumental in building the Monroe County (Carnegie) Public Library.

ootball All-American from Indiana University who became the first African American player drafted by the National Football League. He was later an administrator at IU and an outspoken advocate for civil rights.

ormer juvenile court judge and longtime advocate for children in Monroe County. Appointed to the Monroe Circuit Court VII in 1995, she was the first African American to hold that position. She is recognized as a leading contributor to the law dealing with children’s rights.

Chris Howell | Herald-Times Charlotte Zietlow at the Bloomington Resistance March in Bloomington, Ind. on Jan. 20, 2018, held in support of the nationwide Women’s March “Power to the Polls” event.

Hall of Fame PAST INDUCTEES:

Rachel Peden at her typewriter preparing a column, "The Hoosier Farm Wife."

1989: Nellie Showers Teter, first woman elected to the Indiana University Board of Trustees; and Willie Ethel Streeter, active volunteer and leader in community service work for many years. 1990: William E. Brown, business and civic leader active in many charitable causes; and Dr. Thomas Middleton, a doctor who served on a number of community boards, including the city council. 1991: Gerry Kisters, recipient of the Medal of Honor for heroism during World War II; Noble Bush, a longtime leader in youth baseball. 1992: Beryl Showers Holland, founder of Tri Kappa, Republican national committeewoman, member of state board of education; Maj. Gen. Joe Butcher, distinguished military leader and IU employee and supporter. 1993: David H. Maxwell, framer of the Indiana Constitution instrumental in bringing Indiana University to Bloomington;

1999: Billy Hayes, IU track and field coach for whom the university’s track stadium is named; Elizabeth Bridgwaters, a civic leader in the African-American community.

2019 Monroe County Hall of Fame Inductees, for your wonderful contributions!

Photo courtesy Indiana University Marcellus Neal was the first African-American to earn a degree from Indiana University. Neal graduated in 1895 with a bachelor of arts degree in mathematics. He became a teacher and administrator at Washington High School in Dallas, where he was the head of the science department for 25 years. Neal was killed in a hit-and-run car accident in 1939. He was buried in Mt. Greenwood Cemetery in Chicago. In 2000, he was inducted into the Monroe County Hall of Fame for his part in IU history.

Thanks for helping to create a community where we all love to work, play, and call our home.

David Snodgress | Herald-Times Tomi Allison listens to her introduction during Thursday's induction ceremony for the Monroe County Hall of Fame Thursday. Tomi Allison was mayor of Bloomington from 1983 to 1995.

Congratulations to the 2019 Monroe County Hall of Fame inductees.

Our special t hanks! Gayle Cook’s enduring impact on our community is immeasurable. By cofounding Cook Group and Cook Medical, leading the restoration of many historic landmarks in our city and surrounding community, helping the Monroe County History Center preserve and share our history, and supporting countless other community institutions and programs, Gayle has quietly helped make Monroe County what it is today.

For all that you have contributed to our community, we thank you, Gayle.