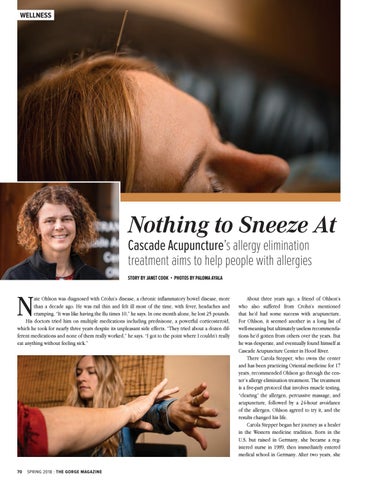 ate Ohlson was diagnosed with Crohn’s disease, a chronic inflammatory bowel disease, more than a decade ago. He was rail thin and felt ill most of the time, with fever, headaches and cramping. “It was like having the flu times 10,” he says. In one month alone, he lost 25 pounds. His doctors tried him on multiple medications including prednisone, a powerful corticosteroid, which he took for nearly three years despite its unpleasant side effects. “They tried about a dozen different medications and none of them really worked,” he says. “I got to the point where I couldn’t really eat anything without feeling sick.”

About three years ago, a friend of Ohlson’s who also suffered from Crohn’s mentioned that he’d had some success with acupuncture. For Ohlson, it seemed another in a long list of well-meaning but ultimately useless recommendations he’d gotten from others over the years. But he was desperate, and eventually found himself at Cascade Acupuncture Center in Hood River. There Carola Stepper, who owns the center and has been practicing Oriental medicine for 17 years, recommended Ohlson go through the center’s allergy elimination treatment. The treatment is a five-part protocol that involves muscle testing, “clearing” the allergen, percussive massage, and acupuncture, followed by a 24-hour avoidance of the allergen. Ohlson agreed to try it, and the results changed his life. Carola Stepper began her journey as a healer in the Western medicine tradition. Born in the U.S. but raised in Germany, she became a registered nurse in 1989, then immediately entered medical school in Germany. After two years, she