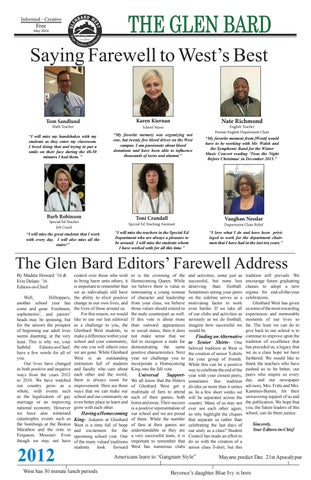 “I will miss my handshakes with my students as they enter my classroom. I loved doing that and trying to put a smile on their face during the 48-50 minutes I had them. ”

“My favorite memory was organizing not one, but twenty five blood drives on the West campus. I am passionate about blood donations and have been able to influence thousands of teens and alumni.”

“I will miss the great students that I work with every day. I will also miss all the stairs!”

“My favorite moment from [Westt] would have to be working with Mr. Walsh and the Symphonic Band for the Winter Music Concert reading ‘Twas the Night Before Christmas’ in December 2015.”

“I will miss the teachers in the Special Ed Department who are always a pleasure to be around. I will miss the students whom I have worked with for all this time.”

“I love what I do and have been privileged to work for the department chairmen that I have had in the last ten years.”

Well, Hilltoppers, another school year has come and gone. Freshmen, sophomores’, and juniors’ heads may be spinning, but for the seniors the prospect of beginning our adult lives seems daunting, at the very least. This is why we, your faithful Editors-in-Chief, have a few words for all of you. Our lives have changed in both positive and negative ways from the years 2012 to 2016. We have watched our country grow as a whole, with events such as the legalization of gay marriage or an improving national economy. However we have also witnessed catastrophic events such as the bombings at the Boston Marathon and the riots in Ferguson, Missouri. Even though we may not have

control over those who wish to bring harm unto others, it is important to remember that we as individuals still have the ability to elicit positive change in our own lives, and the lives of those around us. For this reason, we would like to use our last editorial as a challenge to you, the Glenbard West students, to make a difference within your school and your community, the one you will inherit once we are gone. While Glenbard West is an outstanding institution full of students and faculty who care about each other and the world, there is always room for improvement. Here are three ways that we can make our school and our community an even better place to learn and grow with each other.

Having a Homecoming King- Autumn at Glenbard

West is a time full of hope and excitement for the upcoming school year. One of the many valued traditions students look forward

to is the crowning of the Homecoming Queen. While we believe there is value in nominating a young woman of character and leadership from your class, we believe those values should extend to the male counterpart as well. If this vote is about more than outward appearances or social status, then it does not make sense that we fail to recognize a male for demonstrating the same positive characteristics. Next year we challenge you to incorporate a Homecoming King into the fall vote.

We all know that the Hitters of Glenbard West get a multitude of fans to attend each of their games, both home and away. Their success is a positive representation of our school and we are proud of them. While the number of fans at their games are understandable as they are a very successful team, it is important to remember that West has numerous clubs

and activities, some just as successful, but none less deserving than football. Sometimes seeing your peers on the sideline serves as a motivating factor to work even harder. If we take all of our clubs and activities as seriously as we do football, imagine how successful we would be.

Finding an Alternative to Senior Shirts- One

beloved tradition at West is the creation of senior T-shirts for your group of friends. While this can be a positive way to celebrate the end of the year with your closest peers, sometimes this tradition divides us more than it unites us. In a few short weeks we will be separated across the country. Many of us may not ever see each other again, so why highlight the cliques that separate us rather than celebrating the last days of our unity as a class? Student Council has made an effort to do so with the creation of a senior class T-shirt, but this

tradition still prevails. We encourage future graduating classes to adopt a new regime for end-of-the-year celebrations. Glenbard West has given us some of the most rewarding experiences and memorable moments of our lives so far. The least we can do to give back to our school is to continue to improve upon the tradition of excellence that has preceded us, a legacy that we as a class hope we have furthered. We would like to thank the teachers who have pushed us to be better, our peers who inspire us every day, and our newspaper advisors, Mrs. Fritts and Mrs. Kammes-Bumm, for their unwavering support of us and the publication. We hope that you, the future leaders of this school, can do them justice. Sincerely, Your Editors-in-Chief

University of Illinois at Chicago

University of Illinois at Urbana Champaign

People everywhere do the “Harlem Shake”

The Boston Marathon is bombed

The Supreme Court rules in favor of marriage equality

The “Whip” is the newest dance craze

The Dress causes a debate: white and gold or black and blue?

Soccer all-star and The Glen Bard’s star journalist, Maddie Howard, is headed to the big apple next fall. Maddie is on her way to NYU not only to continue her journalism pursuits, but also to play on the women’s soccer team. As the school’s team is Division III, Maddie will have an opportunity to balance academics and athletics. She originally was looking at and being recruited by a few Division I schools, but after receiving offers, took a closer look at the individual programs. Maddie said, “After seeing the benefits of playing for a school like NYU, I decided that I wanted to go to a school that gave me the opportunity to focus on my journalistic career to a greater extent. While the commitment level in the fall season is about the same as a Division I school, in the spring I have more time to do things like find an internship or work.” Both the commitment level and soccer team’s overall atmosphere influenced Maddie’s choice to go to NYU. In terms of the program

Maddie Howard (34), goes up for the header in a game with club team the Sockers FC Chicago.

specifically, Maddie is most excited about the fact that all of her teammates will share her love for academics and love for soccer. In addition, she feels that the team dynamic is very positive. Maddie mentioned a few notable qualities about both the coach and her future teammates. As she put it, “[The coach] strives to create an environment of unity and openness both on and off the field.” The coach must instill that in the team as well because Maddie said, “[The team’s] desire [is] to be

inclusive towards all of [its] teammates [...] Each of the team members has a unique quality, but that does not stop them from all being a tight knit group of friends.” The team is a perfect extension for Maddie’s soccer career because she deeply valued that sense of community through years of club soccer. Maddie played for Lakers FC in elementary school and then switched to Sockers FC Chicago in middle school. She has been there ever since and chose the club specifically

helped shape me into the person I am today. We have basically watched each other grow up and I am so excited to see what they do with their futures. I wanted to be able to have these same types of relationships in college and continue to experience a teambased environment.” As Maddie heads off to NYU, she is leaving a storied soccer past behind. As she looks back on the years of hard work as well as the bright future ahead, she reflected on what she would tell other aspiring college athletes. Maddie says, “Never, ever give up on your dream to play. The recruiting process can be a brutal experience, but in the end the adversity you face during it will make you a better person when you finally commit to your future school. Work hard, run that extra mile, even if at the time it is easy to quit. You won’t regret it.” Athletes and non-athletes alike will miss Maddie’s wisdom and friendship as she leaves for a new chapter of her journey. When she dons the NYU purple, many will be cheering her on.

because they have sent many athletes on to collegiate programs. Ultimately, the club turned into not only a place to play competitive soccer, but also a home away from home for Maddie. She said that what encouraged her to play college soccer was, “The great relationships I have developed with my teammates over the years. They have provided me with a solid group of people to rely on through the best and worst of times. My relationship Photo courtesy of Maddie Howard. with each individual has

1. The Girl on the Train

Paula Hawkins combines unreliable narration with a plot that continuously shifts perspective to make her thriller one of this year’s best.

Movies By Will Roberts ’17 and Max Asselmeier

Rarely do sequels in movie franchises improve upon the initial film, yet Fury Road (the fourth film in the Mad Max series) managed to do just that.

2. The Game of Lives

One of the most highly anticipated movies of all time, The Force Awakens managed to satisfy long-time fans across the world while simultaneously introducing a generation to the sci-fi phenomenon.

Based on the book by Andy Weir, The Martian offered a thoroughly entertaining story accompanied by a gorgeous portrayal of the Martian desert.

James Dashner concludes his actionpacked sci-fi trilogy with a novel that packs a punch.

One Direction breaks up Obama’s final year as President