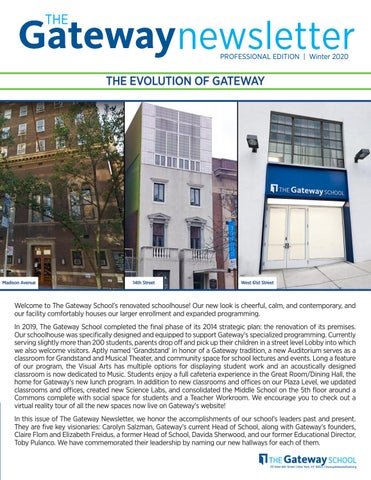 THE EVOLUTION OF GATEWAY

Welcome to The Gateway School’s renovated schoolhouse! Our new look is cheerful, calm, and contemporary, and our facility comfortably houses our larger enrollment and expanded programming. In 2019, The Gateway School completed the final phase of its 2014 strategic plan: the renovation of its premises. Our schoolhouse was specifically designed and equipped to support Gateway’s specialized programming. Currently serving slightly more than 200 students, parents drop off and pick up their children in a street level Lobby into which we also welcome visitors. Aptly named ‘Grandstand’ in honor of a Gateway tradition, a new Auditorium serves as a classroom for Grandstand and Musical Theater, and community space for school lectures and events. Long a feature of our program, the Visual Arts has multiple options for displaying student work and an acoustically designed classroom is now dedicated to Music. Students enjoy a full cafeteria experience in the Great Room/Dining Hall, the home for Gateway’s new lunch program. In addition to new classrooms and offices on our Plaza Level, we updated classrooms and offices, created new Science Labs, and consolidated the Middle School on the 5th floor around a Commons complete with social space for students and a Teacher Workroom. We encourage you to check out a virtual reality tour of all the new spaces now live on Gateway’s website! In this issue of The Gateway Newsletter, we honor the accomplishments of our school’s leaders past and present. They are five key visionaries: Carolyn Salzman, Gateway’s current Head of School, along with Gateway’s founders, Claire Flom and Elizabeth Freidus, a former Head of School, Davida Sherwood, and our former Educational Director, Toby Pulanco. We have commemorated their leadership by naming our new hallways for each of them.

Claire Flom founded Gateway together with Elizabeth Freidus for her son, Peter. At a loss to find a school that would accept her child, Mrs. Flom recruited an educator renowned for her demonstration classes at Teachers College. With Mrs. Flom handling the business aspects and Ms. Freidus in charge of the program, these two pioneers opened Gateway in Madison Avenue Presbyterian to two students and shortly thereafter, to five students in 1965. Mrs. Flom’s dream was to develop an intensive program that prepared young children to join regular classrooms, disseminated its teaching approaches and programming, and engaged in related research. Over the years, Gateway has remained true to and realized its founder’s vision.

Davida Sherwood served as Gateway’s Head of School for 25 years. Gentle, intelligent, and exceptionally perceptive, Dr. Sherwood recognized the need for Gateway to adapt to a changing educational landscape. By the early 1990s, schooling had become more standardized, and New York City was growing rapidly. In response, Dr. Sherwood added Language Therapy, a Reading and Writing program, Science, Technology, Visual Art, Music, Drama, and the Transition Program for 5th and 6th graders. In line with Claire Flom’s vision, Dr. Sherwood’s goal was to prepare Gateway students to transition to mainstream settings as soon as they could so successfully. Other notable accomplishments from Dr. Sherwood’s tenure were the doubling of enrollment, the purchase and renovation of a permanent schoolhouse, the completion of the school’s first capital campaign, and the accreditation of Gateway by the New York Association of Independent Schools (NYSAIS).

Carolyn Salzman has been a longstanding leader of The Gateway School, devoted to preserving and enhancing the school’s ability to serve current and future generations of students and their families. Through the years, she has engaged with Gateway in various capacities: as a parent, a trustee, a Board Chair, and a Head of School. Carolyn’s tie to The Gateway School began in 1998 when her son, Ben, enrolled in the Lower School. Her embrace of the program occurred when her son announced over dinner that he used to be dumb and now was smart. Having consulted with professionals, retained therapists and tutors, and, like every Gateway parent, struggled to find the right and best support and instruction for her son, she realized Gateway’s way – motivation through incremental success – had restored her son’s self-esteem by engaging him in a way that allowed him to learn. Almost immediately, she became the co-chair of Gateway’s first capital campaign dedicated to raising funds to relocate the school from its home in Madison Avenue Presbyterian to a townhouse at Second Avenue and 14th Street. Working with trustees, administrators, and other parents, Carolyn helped secure a $300,000 matching grant from the Kresge Foundation that became the basis for a successful $3 million campaign. A subsequent $1.5 million gift from Bob and Kate Devlin honored a Gateway teacher, Evelyn McKenzie, with the naming of the new schoolhouse and the establishment of Gateway’s first endowed scholarship. From this time onward, and even after her son’s graduation, Carolyn remained devoted to ensuring Gateway would grow and thrive. In 1999, Carolyn joined the Board of Trustees and served as Chair from 2001-2005. In this period, Gateway completed its expansion from thirty-five to sixty students. It added the Transition Program for 5th and 6th graders. In 2002, Gateway was accredited by the New York Association of Independent Schools (NYSAIS). Carolyn reorganized and staffed Gateway’s business operations, tackling the school’s budgeting and accounting systems and reporting and control procedures. To retain teachers, she advised on compensation and benefits. Successfully appealing the funded tuition rate Gateway received as an approved nonpublic school and overseeing the issuance of Gateway’s first tax exempt bond helped to stabilize the school’s finances. With the creation of an Advancement Office,

Carolyn continued to solicit donors and foundations to raise monies for Gateway. In 2004, she welcomed a new Head of School to Gateway following the retirement of Gateway’s 25 year Director, Davida Sherwood, Ph.D. Carolyn’s involvement with Gateway as a parent and trustee was transforming. Raising a child with languagebased learning disabilities imbued her leadership of Gateway with personal meaning. As she collaborated with the school leadership on school matters, her interest in how to create and sustain effective programming grew. From 2005 until she was appointed Head of School in 2013, Carolyn received a M.Ed. in Educational Leadership from Teachers College and consulted with schools on strategic planning. She continued to serve as a Gateway trustee and headed up the Program Committee, which was responsible for quality and cost of the new Middle School, and of the Audit Committee. In 2013, Carolyn Salzman was appointed Head of School. The following year, the Board of Trustees adopted a strategic plan that would secure Gateway’s position as one of the premier independent schools serving students with special needs. Under this plan, the school would grow its enrollment beginning in the Lower School with the acceptance of one additional class per year. This slow and carefully orchestrated expansion ensured Gateway continued to enroll only those students who would benefit most from its program: students with languagebased learning disabilities and/or attention deficits. And, it ensured a thoughtfully designed and implemented program grounded in instruction and curriculum validated by scientific research. Today, Gateway can be proud of all it has accomplished in recent years. The development of students’ language and literacy is at the core of all instruction and curriculum. Instruction is Orton-Gillingham based, direct, explicit, and multisensory. A defined, proprietary curriculum for kindergarten through 8th grade integrates sequences of skills, strategies, and content. The curriculum now includes a rigorous sequence for math. Gateway’s formal Professional Development Program, which comprises lectures, workshops, and coaches, supports and guides teachers and therapists. With the termination of its approved nonpublic school status, Gateway has enjoyed sufficient cash flow to be able to augment its programming with access to a regulation-size gymnasium, provision of lunch for all students and staff, the addition of musical theater, and more. In addition, it offers competitive salaries and benefits for faculty and staff. As it approaches the conclusion of its $7 million campaign to fund its recent renovations, Gateway can report enthusiastic support of the school in the form of current gifts and pledges totaling $5.1 million. As Head of School, Carolyn has led Gateway through a period of redefinition intended to honor its mission to transform the lives of bright children with languagebased learning disabilities and attention deficits. By hiring and mentoring an administrative team with the necessary expertise, she has ensured this clarity of purpose and the school’s commitment to it—in evidence and remarked on by the NYSAIS 5-year Visiting Committee in 2017—which will only become more deeply ingrained in the future. With her collaborative leadership style, an ability to leverage the skills and passions of those around her, and a sensible approach to opportunities and challenges, Carolyn is a dedicated and transformative leader who has created a program and space in which students, their families, and professionals can thrive.

Elizabeth Freidus developed a model for teaching while at Columbia University Teachers College known as diagnostic instruction. Still in use at Gateway today, this instructional approach requires the teacher to teach to the difficulty that gives rise to a student’s learning issues. Today, Gateway’s Professional Development Program educates teachers and therapists about the causes and manifestations of language-based learning disabilities and attention deficits and guides them in the use of instructional approaches proven by research to be most effective. Mrs. Freidus introduced the concept of group-based and paced instruction coupled with the individualization that are the foundations of Gateway’s program.

Toby Pulanco was one of Gateway’s most beloved and longtenured educational leaders. Educational Director and previously a Head Teacher, Ms. Pulanco worked at The Gateway School for 50 years. Trained as an Occupational Therapist and recruited by Elizabeth Freidus, Ms. Pulanco was one of the first two teachers. For many years, Ms. Pulanco taught the youngest class of students, focusing on their readiness for learning. Her class plans and the many memories alumni and alumni parents have of her classes capture the original pedagogy of Gateway. 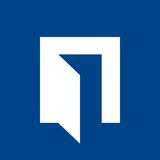