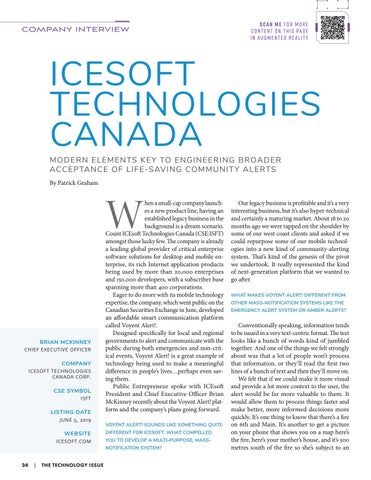 SCAN ME for more content on this page in Augmented Reality

hen a small-cap company launches a new product line, having an established legacy business in the background is a dream scenario. Count ICEsoft Technologies Canada (CSE:ISFT) amongst those lucky few. The company is already a leading global provider of critical enterprise software solutions for desktop and mobile enterprise, its rich Internet application products being used by more than , enterprises and , developers, with a subscriber base spanning more than  corporations. Eager to do more with its mobile technology expertise, the company, which went public on the Canadian Securities Exchange in June, developed an affordable smart communication platform called Voyent Alert!. Designed specifically for local and regional governments to alert and communicate with the public during both emergencies and non-critical events, Voyent Alert! is a great example of technology being used to make a meaningful difference in people’s lives…perhaps even saving them. Public Entrepreneur spoke with ICEsoft President and Chief Executive Oﬃcer Brian McKinney recently about the Voyent Alert! platform and the company’s plans going forward. VOYENT ALERT! SOUNDS LIKE SOMETHING QUITE DIFFERENT FOR ICESOFT. WHAT COMPELLED YOU TO DEVELOP A MULTI-PURPOSE, MASSNOTIFICATION SYSTEM?

Our legacy business is profitable and it’s a very interesting business, but it’s also hyper-technical and certainly a maturing market. About  to  months ago we were tapped on the shoulder by some of our west coast clients and asked if we could repurpose some of our mobile technologies into a new kind of community-alerting system. That’s kind of the genesis of the pivot we undertook. It really represented the kind of next-generation platform that we wanted to go after. WHAT MAKES VOYENT ALERT! DIFFERENT FROM OTHER MASS-NOTIFICATION SYSTEMS LIKE THE EMERGENCY ALERT SYSTEM OR AMBER ALERTS?

Conventionally speaking, information tends to be issued in a very text-centric format. The text looks like a bunch of words kind of jumbled together. And one of the things we felt strongly about was that a lot of people won’t process that information, or they’ll read the first two lines of a bunch of text and then they’ll move on. We felt that if we could make it more visual and provide a lot more context to the user, the alert would be far more valuable to them. It would allow them to process things faster and make better, more informed decisions more quickly. It’s one thing to know that there’s a fire on th and Main. It’s another to get a picture on your phone that shows you on a map here’s the fire, here’s your mother’s house, and it’s  metres south of the fire so she’s subject to an 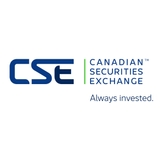 Public Entrepreneur is proud to feature stories about the many facets of entrepreneurship in the capital markets, including coverage on mill...

Public Entrepreneur is proud to feature stories about the many facets of entrepreneurship in the capital markets, including coverage on mill...