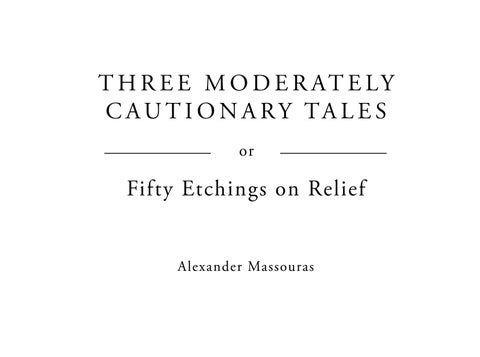 Paul was a gilder.

He loved the glint of gold.

One day, Paul gilded all the picture frames in his house.

It wasn’t quite right, so he gilded the walls too.

In the kitchen he mused: something was wrong.

So he gilded the table;

and then his parakeets, Myrtle and Mae.

Upstairs (and those were gilded too),

with much deftness, Paul gilded his bed to better dream of gold.

The time came when Paul’s entire house was golden and shone like the sun.

And then the doorbell rang.

Together they set off.

Part one: The Difficulty

Hieronymus was a lion tamer.

He was known everywhere for his spectacular bravery and brilliant tricks.

But the fearsomeness with which Hieronymus tamed lions frightened everything else away too.

So Hieronymus passed the time with his lions.

And his house, for all its magnificence, felt lonely and cold.

Noticing the advent of winter one morning, Hieronymus decided to go shopping for a jumper.

“Ugh, the cold,” he shuddered. A lion heard and stayed within.

He found a jumper, but when lifted from the rail it fell limp with fear. “I shall have it nevertheless,” roared Hieronymus, hiding his dismay.

The shopkeeper, terrified by Hieronymus, cowered and then fled.

Hieronymus sought comfort by feeding the ducks. But they would only jump on cones

or hold their beaks open (as if waiting for Hieronymus to place his head there).

Hieronymus trudged home. It was raining, but the drops did not dare to land on him.

He arrived quite dry. “I have of late grown tired of taming,” Hieronymus bellowed over a trembling tea. He wondered whether there might be a cure.

The following day, he visited his doctor, who with grim inevitability leapt through hoops of fire. Since he offered no cure, Hieronymus left.

As Hieronymus emerged, a bee landed on his hand. “A brave bee,” he thought, noticing first its absence of acrobatics, and then a humming sound which grew gradually louder.

Ambrose the beekeeper was near.

Hieronymus returned the bee. As he did so, Ambrose related his own affliction:

So calming was his company that once, while summoning the fire brigade, Ambrose was met with snoring.

If he tried to take a peaceful amble in the park, dogs would swarm around him.

(And sometimes so would people.)

Thus Hieronymus had an epiphany.

They would trade places. Ambrose handed over his bees and Hieronymus relinquished the keys to his lion house.

Hieronymus was a beekeeper.

Ambrose was a lion tamer.

most often from books.

Book by book, he accumulated a stupendous library,

which grew to unimaginable heights.

And Alfred found himself on a tower of knowledge, knowing.

Retrieving a botanical book from the base one day, Alfred caused an accident. The tower fell.

“Boo,” thought Alfred in so many words.

And he decided to rest.

Images: fifty hard-ground etchings Image size: 100 x 150 mm Sheet size: 190 x 275 mm First published in 2011 by Julian Page Printed in England by Ex Why Zed on recycled paper © Alexander Massouras and Julian Page 2011 All rights reserved No part of this book may be reproduced or transmitted in any form or by any means, electronic or mechanical, including photocopying, recording or any other information storage or retrieval system, without prior permission in writing from the publisher. A full catalogue record of this book is available from the British Library ISBN 978-0-9570124-0-0

Three Moderately Cautionary Tales is a series of fifty hard-ground etchings in three cycles: each cycle loosely follows the narrative arc of an epiphany. The melancholy and whimsical etchings draw their imagery from a wide range of sources—Eadweard Muybridge, Jorge Luis Borges, magazine images, pictures from e-bay, Old Master paintings, Wittgenstein, Kurt Schwitters, and the artist’s nephew. The Gilderbook narrates the protagonist’s unrelenting pursuit of beauty. The etchings trace his obsession with gilding and its effect on his world, and the progressive incorporation of gold leaf in the etchings formally mirrors the encroachment that they narrate; the narrative bleeds into the form. Hieronymus the Lion Tamer is about the hope of transformation. The hero’s escape from a vocational malaise is a tale of redemption through the surrender of a talent. Alfred’s Library describes over-zealous pursuit of knowledge which turns out to be fragile; Alfred’s solace is found in rest.