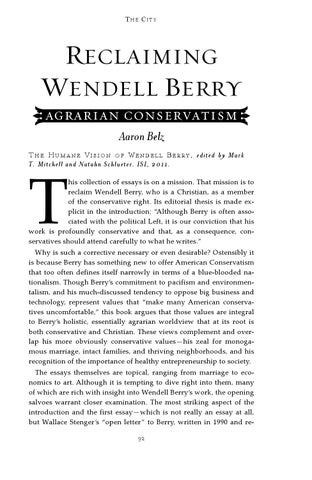 his collection of essays is on a mission. That mission is to reclaim Wendell Berry, who is a Christian, as a member of the conservative right. Its editorial thesis is made ex‐ plicit in the introduction: “Although Berry is often asso‐ ciated with the political Left, it is our conviction that his work is profoundly conservative and that, as a consequence, con‐ servatives should attend carefully to what he writes.” Why is such a corrective necessary or even desirable? Ostensibly it is because Berry has something new to offer American Conservatism that too often defines itself narrowly in terms of a blue‐blooded na‐ tionalism. Though Berry’s commitment to pacifism and environmen‐ talism, and his much‐discussed tendency to oppose big business and technology, represent values that “make many American conserva‐ tives uncomfortable,” this book argues that those values are integral to Berry’s holistic, essentially agrarian worldview that at its root is both conservative and Christian. These views complement and over‐ lap his more obviously conservative values—his zeal for monoga‐ mous marriage, intact families, and thriving neighborhoods, and his recognition of the importance of healthy entrepreneurship to society. The essays themselves are topical, ranging from marriage to eco‐ nomics to art. Although it is tempting to dive right into them, many of which are rich with insight into Wendell Berry’s work, the opening salvoes warrant closer examination. The most striking aspect of the introduction and the first essay—which is not really an essay at all, but Wallace Stenger’s “open letter” to Berry, written in 1990 and re‐ 92

The City Spring 2012 edition, a publication of Houston Baptist University 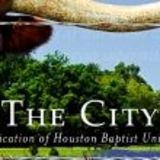