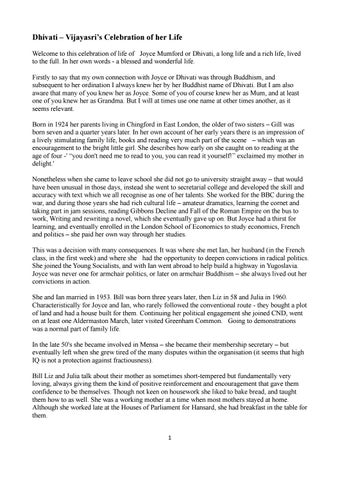 Dhivati – Vijayasri’s Celebration of her Life Welcome to this celebration of life of Joyce Mumford or Dhivati, a long life and a rich life, lived to the full. In her own words - a blessed and wonderful life. Firstly to say that my own connection with Joyce or Dhivati was through Buddhism, and subsequent to her ordination I always knew her by her Buddhist name of Dhivati. But I am also aware that many of you knew her as Joyce. Some of you of course knew her as Mum, and at least one of you knew her as Grandma. But I will at times use one name at other times another, as it seems relevant. Born in 1924 her parents living in Chingford in East London, the older of two sisters – Gill was born seven and a quarter years later. In her own account of her early years there is an impression of a lively stimulating family life, books and reading very much part of the scene – which was an encouragement to the bright little girl. She describes how early on she caught on to reading at the age of four -&#39; “you don&#39;t need me to read to you, you can read it yourself!” exclaimed my mother in delight.&#39; Nonetheless when she came to leave school she did not go to university straight away – that would have been unusual in those days, instead she went to secretarial college and developed the skill and accuracy with text which we all recognise as one of her talents. She worked for the BBC during the war, and during those years she had rich cultural life – amateur dramatics, learning the cornet and taking part in jam sessions, reading Gibbons Decline and Fall of the Roman Empire on the bus to work, Writing and rewriting a novel, which she eventually gave up on. But Joyce had a thirst for learning, and eventually enrolled in the London School of Economics to study economics, French and politics – she paid her own way through her studies. This was a decision with many consequences. It was where she met Ian, her husband (in the French class, in the first week) and where she had the opportunity to deepen convictions in radical politics. She joined the Young Socialists, and with Ian went abroad to help build a highway in Yugoslavia. Joyce was never one for armchair politics, or later on armchair Buddhism – she always lived out her convictions in action. She and Ian married in 1953. Bill was born three years later, then Liz in 58 and Julia in 1960. Characteristically for Joyce and Ian, who rarely followed the conventional route - they bought a plot of land and had a house built for them. Continuing her political engagement she joined CND, went on at least one Aldermaston March, later visited Greenham Common. Going to demonstrations was a normal part of family life. In the late 50&#39;s she became involved in Mensa – she became their membership secretary – but eventually left when she grew tired of the many disputes within the organisation (it seems that high IQ is not a protection against fractiousness). Bill Liz and Julia talk about their mother as sometimes short-tempered but fundamentally very loving, always giving them the kind of positive reinforcement and encouragement that gave them confidence to be themselves. Though not keen on housework she liked to bake bread, and taught them how to as well. She was a working mother at a time when most mothers stayed at home. Although she worked late at the Houses of Parliament for Hansard, she had breakfast in the table for them. 1

Every life has its more turbulent times, we human beings are often surprising to ourselves and to others, and Joyce was no exception to this. In the seventies there came a time when Joyce felt a pressing need to explore aspects of her nature. She began meeting a group of women and eventually met Tess. Joyce moved out of the family home. This period could have left difficulties or hard feelings, but again that seems to have been a conventional route, which neither Joyce, Ian, Tess or the rest of the family wished to take. Their feeling was - life&#39;s too short to argue. This says a lot for the openness and mutual respect which seemed to be the prevailing atmosphere. One of the qualities that I always appreciated in her was that she always spoke with gratitude and appreciation of her friends and family – she always said how lucky she was to have such caring children and friends. This was very natural and heartfelt in her, to feel gratitude. For a while, Joyce lived with Tess, and this was also the period of her growing engagement with Buddhism. She first turned in this direction through exploring meditation with the Quakers, but soon she knew that she wanted to make a deeper commitment to living the Buddhist life, and in 1995 she was ordained into the Triratna Buddhist Order, being given the Buddhist name Dhivati (full of intelligence and wisdom). It was around this time that I first got to know Dhivati – I remember her on a month long retreat and she was in her 60&#39;s. She camped throughout, despite rain and wind, and not the greatest good health. I remember being impressed by her good humour and determination, and readiness to involve with te Buddhist life. The ordination training is searching and requires us to confront ourselves honestly and fully, and she was definitely willing to give herself to it. One great contribution that Dhivati made to our Buddhist community was her work with Windhorse publications. Dharmasura, who worked with her for some years mentions that she would have copy-edited and proofread numerous books – during a period when Windhorse produced about 60 titles, such as Know your Mind, Tales of Freedom, What is the Sangha. He remembers her as a tenacious researcher. It was Dhivati who researched and tracked down all the unattributed quotations in Sangharakshita&#39;s great classic &#39;A Survey of Buddhism.&#39; Those of us who have studied that work know exactly how demanding and important a contribution that would have been! One of the main teachings that Joyce or Dhivati responded to was on metta – loving-kindness, not just as an abstract ideal, but as something that can be developed systematically through meditation. Even as a child she longed for peace and harmony in the world, so coming across the meditation that calls up goodwill for all beings was a great relief and inspiration for her. And she appreciated a religious dimension that stimulated her intelligence. She was a constant seeker, always wanting to lead a principled life, to live out her ideals. And whatever principle she lived by had to make sense to her reason as well as her emotion. For this ceremony she had two requests, that we should emphasise metta – loving kindness, and the Buddha&#39;s teaching that actions have consequences, so our readings will reflect those wishes. In addition, at her ordination Dhivati took on a meditation practice, as do most members of the Triratna Order, the visualisation of a Buddha or Bodhisattva, symbolic of an aspect of Enlightened Mind. She chose Green Tara, a female Buddha, representing the compassion aspect of Enlightenment. Tara&#39;s posture is symbolic. One leg is in meditation posture, symbolising the inner life of a buddhist practitioner, but the other leg is stepping down, into the world, into active engagement with life. Which seems appropriate for the whole of Joyce and Dhivati&#39;s quest in life.

Our beautiful online project to document 50 years of people’s commitment and practice within the Triratna Buddhist Order around the world. "After [Dhivati] died we found what she had done with her estate was to divide it into four. So each of her three children had one of these shares each and the last share she gave to the Order". The Fifty Years, Fifty Voices project has been partly funded by a legacy which Dhivati left to the Triratna Trust. Although we don’t have any recordings of Dhivati we do have a celebration of her life written by Vijayasri. To read more about the project visit: www.thebuddhistcentre.com/50Voices 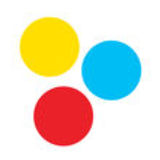