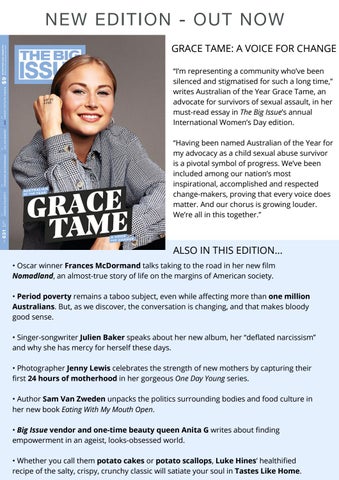 NEW EDITION - OUT NOW GRACE TAME: A VOICE FOR CHANGE “I’m representing a community who’ve been silenced and stigmatised for such a long time,” writes Australian of the Year Grace Tame, an advocate for survivors of sexual assault, in her must-read essay in The Big Issue’s annual International Women’s Day edition. “Having been named Australian of the Year for my advocacy as a child sexual abuse survivor is a pivotal symbol of progress. We’ve been included among our nation’s most inspirational, accomplished and respected change-makers, proving that every voice does matter. And our chorus is growing louder. We’re all in this together.”

ALSO IN THIS EDITION... • Oscar winner Frances McDormand talks taking to the road in her new film Nomadland, an almost-true story of life on the margins of American society. • Period poverty remains a taboo subject, even while affecting more than one million Australians. But, as we discover, the conversation is changing, and that makes bloody good sense. • Singer-songwriter Julien Baker speaks about her new album, her “deflated narcissism” and why she has mercy for herself these days. • Photographer Jenny Lewis celebrates the strength of new mothers by capturing their first 24 hours of motherhood in her gorgeous One Day Young series. • Author Sam Van Zweden unpacks the politics surrounding bodies and food culture in her new book Eating With My Mouth Open. • Big Issue vendor and one-time beauty queen Anita G writes about finding empowerment in an ageist, looks-obsessed world. • Whether you call them potato cakes or potato scallops, Luke Hines’ healthified recipe of the salty, crispy, crunchy classic will satiate your soul in Tastes Like Home. 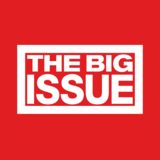