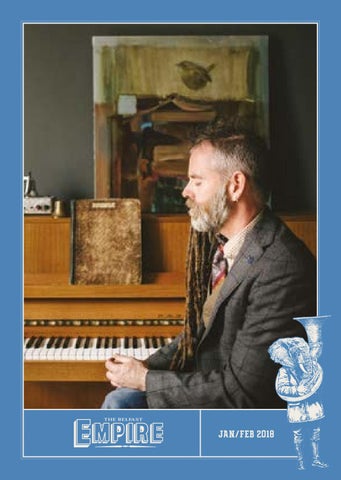 BOOKING INFORMATION TICKETS AVAILABLE FROM THE EMPIRE BAR (no booking fees) ALL TICKETMASTER OUTLETS 24 hr booking line 0844 277 445 www.ticketmaster.ie Should you or any member of your party require any special assistance, our staff will be delighted to help. We recommend that when possible, you notify The Belfast Empire prior to your visit. Please note that some performances may use special effects, such as strobe lighting and smoke effects. All patrons must be aged 18 or over. FOLLOW US ON Twitter, Facebook &amp; Instagram

Dear all, Happy new year to you all! Welcome to 2018 and if it’s going to be as busy as last year then you’re in for a treat. We’re straight out of the box with our regular winter visit form CC Houlihan’s Elvis Spectacular, and classic rock covers from The Illegals. There’s plenty of original music as well, with Three Trapped Tigers’ biggest headlining Belfast show to date, RavenEye resurrecting classic garage rock and Out to Lunch goodness with Texan folk siblings The Oh Hellos. If you like your music a touch heavier there’s Geoff Tate of Queensryche fame performing the classic Operation Mindcrime in its entirety, and metalgrass legends Hayseed Dixie return to the Music Hall for what’s bound to be another spectacular sold-out date. And there’s all the usual sports, local bands and comedy to choose from as well. As always, I remain yours,

EVERY NIGHT IN THE BAR ENTERTAINMENT 10PM

Robyn G Shiels Reevah Joel Harkin Oisín Ó Scolaí It’s easy to make comparisons to the likes of Bonnie ‘Prince’ Billy or list the legends that ROBYN has played support for (Van Morrison, Low and Cat Power, if you’re interested). It’s a lot harder to embrace the darkness that he projects from stage and on record, but it’s definitely worth it. Heartfelt, searingly honest, and sometimes difficult to hear, Robyn’s music is a unique insight into the parts of our psyche we might like to side-line. Truly one of Northern Ireland’s hidden talents. Support comes from REEVAH, JOEL HARKIN and OISÍN Ó SCOLAÍ.

Fresh from playing the Party Across the Road, DARREN DOHERTY AND THE HEATHEN CHOIR are picking up admirers in all the right places. When not performing with A Northern Light or cheering on Liverpool FC, Darren can be found indulging his love of classic REM, Counting Crowes and Ryan Adams. Bags of melody and substance over style. Support comes from songstress and vlogger SONYA SLEATOR, who recently launched her Adams EP in The Empire, SIT TIGHT, who won the Bulliet Bourbon Battle of the Bands competition 2017 and funk monsters VELVET ALIBI. All for a mere £3! 6

TINN LIZZY, CROW BLACK CHICKEN, KICK THE BUCKET BLUES BAND and many more are all coming together to raise funds for the 2018 Belfast City Blues Festival. Belfast’s early blues scene helped define the city’s musical roots. While the show-bands made their money regurgitating the same covers over and over, fans flocked to the Maritime hotel to see original R&amp;B music, brought to life by bands like Them. BELFAST CITY BLUES FESTIVAL is run by a group of local enthusiasts as a tribute to those exciting, pre-troubles times. All proceeds for this show will go towards making 2018’s festival bigger and better than ever.

Simply put, Operation Mindcrime by Queensryche is one of the finest Metal Concept albums of all time, up there with Maiden’s Seventh Son of a Seventh Son, and King Diamond’s Abigail. It tells the story of Nikki, a heroin addict who is manipulated by the mysterious Dr X to become a state sponsored murderer every time he hears the code word ‘Mindcrime’. GEOFF TATE, the ‘voice of Progressive Metal’, will be joining us to perform the album in its entirety. With a staggering 25 million records sold over a 35 year career, Geoff is truly one of the giants of the genre. 10

Every year CC HOULIHAN and his Taking Care of Business band brighten up our January by celebrating Elvis’ birthday here in The Empire. Complete with the Sweet Sensation backing singers and authentic outfits, it really is the next best thing to Live in Vegas. One of the best regarded tributes to the man they call the king, the ELVIS SPECTACULAR’s energy and authenticity means people always come back for more. With Ciaran winning a slew of Elvis awards, including ‘Best Gospel Elvis’ you’re guaranteed an authentic experience.

Tom Robinson was a classically trained pianist who happened to discover the back catalogue of Warp Records. Now, Warp helped to define the Alternative Electronic scene, featuring such ground-breaking artists as Autechre, Boards of Canada and Aphex Twin. Tom’s big idea was to take Warp’s unique aesthetic and turn it into a live band. THREE TRAPPED TIGERS is the result. Now two albums into an uncompromising career, Three Trapped Tigers continue to evolve, drawing comparisons to the likes of Fuck Buttons, 65DaysofStatic and Not Squares. We’re very excited about their Belfast leg of their pretty massive UK tour, and if you’re in anyway interested in the experimental, the off-beat and the left-field, you should be too. 14

The greatest Northern Irish band your kids never heard of are back. Just ask anyone swanning around the Belfast music scene in the mid/late 80s; THE ADVENTURES were hot stuff. Broken Land, the first single from the sophomore album, hit the heady heights of the U.K. Top 40, and was the most played song on Radio 1 that year. With big synths, reverb and harmonies, THE ADVENTURES should have been the next Simple Minds. But there’s no justice in the world and the band faded from the national consciousness. To this day a devoted bunch of fans keep the faith. If you know THE ADVENTURES you’ll understand. If you don’t, then give them a go. 15

PAY AT THE DOOR

THE TEMPERANCE MOVEMENT Check out THEBELFASTEMPIRE.COM for more shows and info.

THE 13TH OUT TO LUNCH ARTS FESTIVAL

Texas siblings Tyler and Maggie Heath first came together as musicians to record a song for their mother’s birthday. Enjoying the process as much as the result led them to forming THE OH HELLOS, a self-produced and publicised project to further their song-writing ambitions. Big, boisterous and full of a joy that’s impossible to fake, THE OH HELLOS recorded output veers from traditional folk, through to lo-fi and the more contemplative parts of classic indie-pop. No two Oh Hellos concerts are the same, as the siblings are joined by a revolving cast of friends, well-wishers and collaborators, adding up to a genuine happening!

If the 60’s kicked the doors in for the stadium rock band, the 70’s saw them taking over. The Eagles were one such outfit, alongside Led Zeppelin and Fleetwood Mac that released albums that sold by the million, embarked on tours that crossed the world and set the private jet as the very peak of rock excess. THE ILLEGALS pay tribute to those glorious pre-CD days and manage to do justice to Henley and Co.’s massive back catalogue. With the tunes, the experience and the vintage instruments to boot, THE ILLEGALS do justice to the band that defined American Rock. 20

It doesn’t seem like 16 years since HAYSEED DIXIE introduced us to the genre of ‘Rockgrass’, through the medium of their debut album A Hillbilly Tribute to the Music of AC/DC. No-one knew then that the combination of hard-rock and bluegrass would prove such a hit. Who could have foreseen the band becoming a festival favourite, crossing the globe to play to millions of rowdy punters? They’ve become a bit of a tradition here at The Empire, and you know what? We’re chuffed to the rafters to have them back. Since 2001 they’ve released 14 full length albums, played 1300 live shows and have a repertoire that would put Springsteen to shame. Quite simply one of the best party bands on this green Earth! 21

Guns and Roses were the world’s most dangerous band at their peak, with five mercurial musicians that somehow managed to overcome ego, substance abuse and a hostile press to release one of the greatest debut albums of all time. UK GUNS AND ROSES attempt to capture that golden era of GNR, before the no-shows, the plastic surgery and Chinese Democracy. 15 years on the road have honed them into a lean fighting unit, and none of Axl’s time management issues. November Rain, Welcome to the Jungle, all the greatest hits and a few fan favourites thrown in for good measure.

FRI 09 FEB | 7.30PM | £11.50 If you can judge a band by the company they keep, then RAVENEYE come very highly recommended. Within months of forming they’d been invited by Joe Satriani himself to guest on his European tour. Since then they’ve backed up Deep Purple and Slash. High praise indeed! Acclaimed as ‘Britain’s brightest new rock act’, RAVENEYE tap into a classic garage rock vein, that’s as timeless as it is infectious. This is essential stuff for fans of The Black Keys, the Black Crowes and classic era Rolling Stones. 24

Maurice Jay and his crew know how to party. Like, 1980’s party, the sort of party that makes House Party look like House Party 2. And you’re all invited. Simply the best 1980’s rock, pop and soundtrack tribute around, PLEASUREDOME have been a regular visitor to The Empire for longer than both of us care to remember, having played to 20,000 satisfied guests over the years– and counting! Always a sell out and with the approval of Limahl himself, PLEASUREDOME is the next best thing to actually being there. 25

Unbelievably, this is the sixth ROCK FOR ALZHEIMER’s gig at The Empire, and we’re glad to see them back. With the organisers rightfully recognised as Best Fundraisers by the Northern Ireland Dementia Friendly Awards, you can be assured this is a great night for a great cause. As always, AC?DC will be headlining this worthy night, with the finest that antipodean rock has to offer, while scene stalwarts ARMS OF VENUS DE MILO will be contributing the best of rock and indie. All proceeds go to help fund Alzheimer’s care and research.

There’s a definite affinity between the stage in The Empire and the man they call DUKE SPECIAL. Maybe because there’s been so many special moments shared, great nights out and a little bit of magic in the dust, but we’re really glad to have him back. The Dukes new album Hallow, which revolves around the life and works of poet Peter Longley, was released to near universal acclaim, and this night sees the first airing in full. Tuneful, experimental and with a drop of whimsy never far around the corner, DUKE SPECIAL’s work continues to captivate.

Anyone who’s seen THE BON JOVI EXPERIENCE will tell you that frontman Tony’s resemblance to the man himself is uncanny. It would be remarkable enough on its own, but with the band to back him up, you’ll be hard pressed to tell him from the real thing. With the added kudos of having played at Jon Bon Jovi’s own birthday party, THE BON JOVI EXPERIENCE will take you on a two hour plus joyride through some of the 80s and 90s’ most memorable hits – Blaze of Glory, Always and Livin’ on a Prayer to name but a few.

In a time where the same old bands release the same old records and headline the same old festivals, we need something to remind us exactly what we’re missing. THE TEMPERANCE MOVEMENT have worshipped at the altar of classic rock, while maintaining something ‘other’ that defines them from the rest of the guitar slingers out there right now. If you think a bit White Stripes, a bit the Stones, even a bit of Credence thrown in, then you’re nearly there. Seeing them live will take you all the way. 31

ALL CRAFT BEER 2 for

More from The Belfast Empire