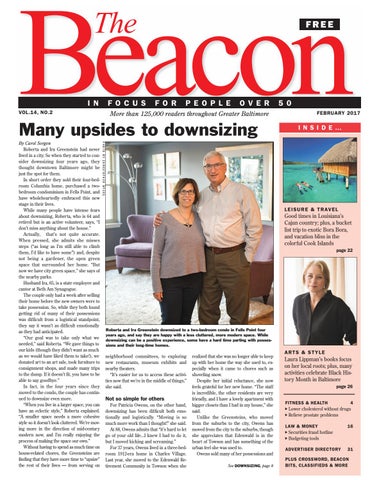 Many upsides to downsizing

By Carol Sorgen Roberta and Ira Greenstein had never lived in a city. So when they started to consider downsizing four years ago, they thought downtown Baltimore might be just the spot for them. In short order they sold their four-bedroom Columbia home, purchased a twobedroom condominium in Fells Point, and have wholeheartedly embraced this new stage in their lives. While many people have intense fears about downsizing, Roberta, who is 64 and retired but is an active volunteer, says, “I don’t miss anything about the house.” Actually, that’s not quite accurate. When pressed, she admits she misses steps (“as long as I’m still able to climb them, I’d like to have some”) and, despite not being a gardener, the open green space that surrounded her home. “But now we have city green space,” she says of the nearby parks. Husband Ira, 65, is a state employee and cantor at Beth Am Synagogue. The couple only had a week after selling their home before the new owners were to take possession. So, while they both found getting rid of many of their possessions was difficult from a logistical standpoint, they say it wasn’t as difficult emotionally as they had anticipated. “Our goal was to take only what we needed,” said Roberta. “We gave things to our kids (though they didn’t want as much as we would have liked them to take!), we donated art to an art sale, took furniture to consignment shops, and made many trips to the dump. If it doesn’t fit, you have to be able to say goodbye.” In fact, in the four years since they moved to the condo, the couple has continued to downsize even more. “When you live in a larger space, you can have an eclectic style,” Roberta explained. “A smaller space needs a more cohesive style so it doesn’t look cluttered. We’re moving more in the direction of mid-century modern now, and I’m really enjoying the process of making the space our own.” Without having to spend as much time on house-related chores, the Greensteins are finding that they have more time to “upsize” the rest of their lives — from serving on

Roberta and Ira Greenstein downsized to a two-bedroom condo in Fells Point four years ago, and say they are happy with a less cluttered, more modern space. While downsizing can be a positive experience, some have a hard time parting with possessions and their long-time homes.

neighborhood committees, to exploring new restaurants, museum exhibits and nearby theaters. “It’s easier for us to access these activities now that we’re in the middle of things,” she said.

Not so simple for others For Patricia Owens, on the other hand, downsizing has been difficult both emotionally and logistically. “Moving is so much more work than I thought!” she said. At 88, Owens admits that “it’s hard to let go of your old life...I knew I had to do it, but I moved kicking and screaming.” For 37 years, Owens lived in a three-bedroom 1912-era home in Charles Village. Last year, she moved to the Edenwald Retirement Community in Towson when she

realized that she was no longer able to keep up with her home the way she used to, especially when it came to chores such as shoveling snow. Despite her initial reluctance, she now feels grateful for her new home. “The staff is incredible, the other residents are very friendly, and I have a lovely apartment with bigger closets than I had in my house,” she said. Unlike the Greensteins, who moved from the suburbs to the city, Owens has moved from the city to the suburbs, though she appreciates that Edenwald is in the heart of Towson and has something of the urban feel she was used to. Owens sold many of her possessions and See DOWNSIZING, page 8 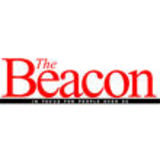