A Nomad's Art: Kilims of Anatolia 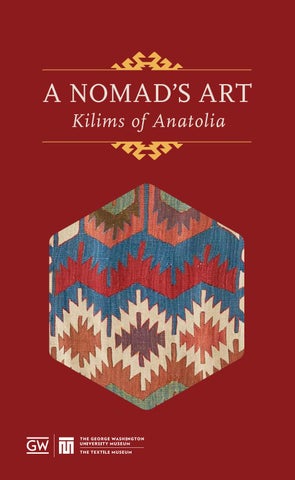 The works of art presented in this exhibition are called kilims and are a testament to the artistic achievements of women who long ago lived a now vanished nomadic lifestyle, one that flourished for centuries in Anatoliaâ&amp;#x20AC;&amp;#x201D; modern-day Turkeyâ&amp;#x20AC;&amp;#x201D;until the advance of the twentieth century.

Anatolian kilims represent a distinct weaving tradition while conforming to the mechanics of tapestry weaving practiced in many parts of the world. They are formed with wool fibers and tapestry weave technique, large in scale, and decorated with bold but simple coloration and skillfully balanced designs (fig. 1).

Kilim is a general name given in Anatolia and its surrounding areas in West Asia to a group of sturdy, utilitarian textiles woven in slit tapestry weave technique. These works of art are multifaceted objects and played an important role in the artistic history of Anatolia. The highly developed designs and the fine execution seen on the surviving eighteenth- and nineteenth-century kilims in this exhibition suggest that the Anatolian kilim tradition had been wellestablished by the time the seventeenth century came to a close. Anatolian kilims, especially long kilims such as those presented in this exhibition, hold significance far beyond their visual impact. Most importantly, they are the only surviving, tangible evidence of their makers’ nomadic lifestyle. Each Anatolian kilim demonstrates the complicated interactions between the creative

energies of a weaver, her community, and her exposure to the social, economic, and political environment in which she lived. The eighteenth- and nineteenth-century kilims in the exhibition can be seen as remarkable examples of the power of these nomadic women to create an artistic tradition that endured for centuries and still resonates with contemporary audiences. This is a remarkable legacy, given that the female creators of kilims did not have formal art education and lived in a patriarchal society. It is also highly ironic that in spite of these social constraints, it is their work, and no other lasting cultural manifestation, that gives testament to the nomads’ centuries-long way of life (fig. 2). Figure 2: Kilim, Central Anatolia, possibly east-central, mid-19th century. Wool; slit tapestry weave, eccentric weft, lazy lines. The Textile Museum 2013.2.19, The Megalli Collection. Dimensions (warp × weft): 444.5 × 69 cm (175 × 27 inches) 4

People and Lifestyle These women weavers descended from Turkmen nomads and their settled kin. Turkmenâ&amp;#x20AC;&amp;#x201D;ethnic Turkish nomadsâ&amp;#x20AC;&amp;#x201D;began to arrive in Anatolia in the tenth century, adding further diversity to an already ethnically varied region. As they traveled from eastern Central Asia to Anatolia, they passed through lands occupied by adherents of two religions, Islam and Eastern Orthodox Christianity, and two distinct cultures, Persian and Byzantine/Greek. Nomads were typically herders and depended on their large flocks for their livelihood. They moved from one region to another to exploit resources, usually traveling with close family members. Some nomadic groups, such as those in Anatolia, were pastoral nomads, or semi-nomadic, meaning they moved between two locations.

Two major but distinct activities dominated the lives of the Turkmen nomads: migration and pastoral life. The nomads migrated to winter pastures in lower elevations (kış la) and to summer pastures high in the mountains (yayla). During these twice-yearly movements, camels carried the family’s belongings, including the tent, while the family, except the youngest ones, walked alongside the camels. These camel loads were covered with a very fine long kilims specially woven for this purpose. Through these long kilims, women displayed their weaving skills to everyone they encountered on the road during the migration, while also protecting the family’s belongings (fig. 3). Figure 3: Kilim, Western Anatolia, first half 19th century. Wool; slit tapestry weave, supplementary-weft patterning. The Textile Museum 2013.2.38, The Megalli Collection. Dimensions (warp × weft): 338 × 82 cm (133 × 32 inches). Warp horizontal.

Long kilims were prominently displayed when the family reached the pastureland and set up the tent. The tent covered a single open space often with a wooden post in the middle and the tent interior was an all-purpose space where the family worked, ate, slept and conducted social activities. The large transportation bags that carried the familyâ&amp;#x20AC;&amp;#x2122;s belongings during the migration were turned into storage bags and placed in one or two rows inside the tent. These lines of storage bags were covered with the long kilims that were previously used as camel-load covers. Occasionally these long kilims also served as hangings, reducing the dust, wind, and sun when the tent walls were raised during summer heat, and as insulators during the winter months.

Design and Weaving Kilim is often referred to in western literature as a flat-weave because it does not have any pile or tufts as carpets do. The tapestry-weave technique is quite oldâ&amp;#x20AC;&amp;#x201D;archaeological examples go back well over two millenniaâ&amp;#x20AC;&amp;#x201D;and geographically widespread. In the slit-tapestry weave technique as used in Anatolian kilims, the design is created by colored horizontal weft yarns interlaced in over-under sequence through the vertical warp yarns and completely obscuring

them (fig.Â 4). Like any tapestry-woven textile, Anatolian kilims have a weft-faced plain weave structure, but the real essence of Anatolian kilim is that the design is built up Figure 4: Slit-tapestry weave, diagram by Lydia Fraser, 2004

of small areas of solid color, each of which is

woven with its own weft yarn. Weft yarns from adjacent areas never interlock or intermingle. The different colored weft yarns turn back using adjacent warp yarns, resulting in a vertical slit. In this manner, the artistic expression of the kilim and its technique are inextricably bound together (fig. 5). Tapestry weave inherently limits the ability to create curvilinear forms unless the weaver has the necessary equipment, time, experience, know-how,

and most importantly very fine, thin yarns. In creating their designs, Anatolian weavers seem to have accepted the natural limitations of the material and technique instead of working against them. They developed a design repertoire that was essentially rectilinear, geometric, and nonrepresentational or abstract as seen on the examples in the exhibition, while the original inspiration for the designs probably came from the natural world around them. The artistry of kilims is in every element of their making. The mastery began with beautifully dyed wool and the use of saturated colors. The weavers cleverly selected and paired traditional motifs built with triangular and hexagonal forms. They balanced Figure 5: Kilim, Central Anatolia, Konya, 18th century. Wool; slit tapestry weave, weft-faced plain weave, supplementaryweft wrapping for outlines, eccentric weft. The Textile Museum 2013.2.63, The Megalli Collection. Dimensions (warp × weft): 404 × 96.5 cm (159 × 38 inches). Warp horizontal.

open and decorated areas in design layout, leaving the textile feeling neither crowded nor empty. These kilims were created with skillful weaving that respected the inherited tradition while showcasing the weaver’s originality and individuality (fig. 6).

About Murad M. Megalli Murad M. Megalli (1957–2011) demonstrated his passion for textiles by assembling impressive collections of Central Asian ikats and Anatolian kilims, both of which are now part of The Textile Museum collections. This exhibition showcases a selection from Megalli’s Anatolian kilim collection bequeathed to The Textile Museum in 2013. Megalli, a former Textile Museum trustee and George Washington University alumnus (BS ’80, MS ’83), was first introduced to the world of textiles when he moved to Istanbul in 1987 and developed a close friendship with the scholar and photographer of Anatolian life, Josephine Powell. He was inspired by the beauty, range of colors, and designs of the textiles, but he also was impressed by and interested in the history and culture of the people who created and used these works of art. In 2010, Megalli was awarded The Textile Museum Award of Distinction for his service in fulfillment of the museum’s mission of expanding public knowledge and appreciation of the artistic merits and cultural importance of the world’s textiles. As a lasting legacy to the museum, Megalli’s estate bequeathed his collection of Anatolian kilims and established the Megalli Family Endowment to promote research projects, educational programs, and publications of Central Asian ikats and Anatolian kilims. Sumru Belger Krody, senior curator 14

Program Highlights All programs are free unless otherwise noted. For a complete list of programs with descriptions, or to register for a program, visit museum.gwu.edu/programs or call 202-994-7394. LECTURES

Kilims from your Collection Saturday, October 27, 10:30 AM Peter Davies, Turkana Gallery Free, but reservations are required Major support for this exhibition and its accompanying catalogue is provided by the Megalli Family Endowment, the Coby Foundation, Ltd., Jeremy and Hannelore Grantham, and the Markarian Foundation. Generous support is also provided by the Bruce P. and Olive W. Baganz Fund for The Textile Museum Exhibitions and Publications, and Roger and Claire Pratt. Additional funding for the catalogue is provided by the Institute for Turkish Studies and the Marshall and Marilyn R. Wolf Foundation. 16

Visitor Information Location The museum is located at the corner of 21st and G streets, NW, four blocks from the Foggy Bottom-GWU Metro Station (Blue, Orange, and Silver lines). For directions and parking information, visit museum.gwu.edu/getting-here.

Textile Library Located on the museum’s fourth floor, the Arthur D. Jenkins Library is open Wed–Thu 1– 4 PM and by appointment. Please contact the librarian before your visit at museumlibrary@gwu.edu.

Museum Shop Visit the shop for unique jewelry, home décor, books, and gifts from Washington, D.C., and around the world. To place an order for shipment, contact 202-833-1285 or museumshop@gwu.edu.

Membership Support from members and donors is the driving force that allows the museum to continue its work bringing art, history, and culture alive for the GW community and the public. To join or renew a current membership, or to make a donation, visit museum.gwu.edu/support, call 202-994-5579, or stop by the front desk. The George Washington University Museum and The Textile Museum 701 21st Street, NW, Washington, DC 20052 202-994-5200 | museum.gwu.edu @GWTextileMuseum TextileMuseum GWMuseum

A Nomad's Art: Kilims of Anatolia

Guide to the George Washington University Museum and The Textile Museum's exhibition (September 1 through December 23, 2018) 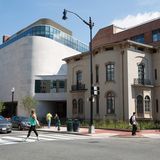 The George Washington University Museum and The Textile Museum