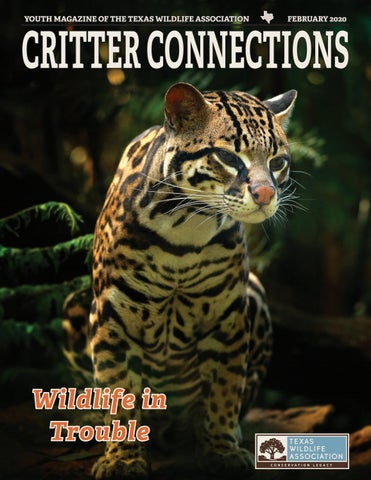 Texas Wild-Rice Texas is home to over 30 different species of plants that are threatened or endangered of becoming extinct. One such species is Texas wild-rice (Zizania texana). Texas wild-rice is a type of grass that only grows in the first two miles of the San Marcos River. Its roots are in the riverbed and most of the plantsâ&#x20AC;&#x2122; leaves and stem grow underwater, bending with the flow of the river. The upper part of the stem grows up out of the water and produces very small yellowish flowers. The flowers are wind pollinated, which means their pollen is carried to other flowers by wind. Texas wild-rice has very special habitat requirements, making the San Marcos River an ideal place for it to grow. This is also why it is endangered, because it only grows in one place, so there are very few wildrice plants. The San Marcos River is fed from a spring. A spring is an ecosystem where water comes up out of the ground from an underground rock formation known as an aquifer. Spring-fed rivers produce very clean water with a controlled temperature year-round. Because of this, they make a great habitat for many species of wildlife that are sensitive to pollution and temperature change, such as Texas wild-rice. Source: Texas Parks & Wildlife Dept.

Did you know... … that an endangered species is in danger of becoming extinct? … that there is a wildlife law called The Endangered Species Act which protects living things that are threatened and endangered? … that, thanks to conservation efforts, some species have recovered and are no longer endangered? … that there is a list called the IUCN Red List where you can find information about threatened and endangered species? … that there is a ranking system for living things to determine how likely they are to become extinct? … that extinction occurs naturally, but is increased by human activities such as pollution and habitat loss? … that freshwater ecosystems are home to many endangered and threatened species? … that many species, such as the dodo bird have become extinct over time?

development and agriculture, so do ferret populations. Grassland ecosystems contain important habitats for animals like prairie dogs and ferrets but those same wide open grasslands make excellent cropland for farming or grazing lands for livestock like cattle. Cattle and prairie dogs can compete for the same food and space. This pressure Black-footed ferrets can lead prairie dogs to abandon their territories for areas with less competition. This has a negative effect on black-footed ferrets as it is more difficult for predators to leave and form new territories.

Endangered & Threatened by Elanor Dean Texas is a large state with many different ecosystems, which allows for great diversity in plant and animal life. This also means that Texas is home to many living things that are threatened or endangered. If a living thing is given the status of threatened or endangered, it means that it is in danger of becoming extinct. A threatened species is likely to become endangered at some point in the future if efforts are not made to improve its living conditions. If a species is extinct, it means that there are no longer any living members of that species on earth. One example of an extinct animal in the wild is the Spixâ&#x20AC;&#x2122;s Macaw, which is the bird from the movie Rio. In Texas there are over 100 plants and animals that are listed as federally endangered or threatened which means that they are at risk of becoming extinct everywhere. There are another 100 species that are not federally listed, but are state listed as threatened or endangered, which means that they are at risk of extinction within Texas, but may have healthy populations in other parts of the world. Plants and animals are added to one of these lists under a law called the Endangered Species Act. This law was created to help and conserve living things that are in danger of becoming extinct.

Ocelots are another predator that has been affected by habitat loss in Texas. They are found in South Texas in brush or thornscrub habitats which are defined by thick patches of native low growing trees and shrubs. This important habitat, which provides ocelots cover and space, has been cleared to develop cropland and more recently, for city and community growth and expansion. Ocelots have limited habitat space available to live and grow, so scientists and conservationists are working with landowners and community leaders to find a balance.

Plants and animals become extinct for different reasons, but one of the main reasons is due to habitat loss. Habitat loss can lead to many issues for wildlife including lack of shelter, reduced open space to live and grow, and limited food and water. In Texas, the land is over 95% privately owned, which means private land stewardship is very important to the survival of wildlife and their habitats. People who own land can make decisions about how to manage or care for their land with wildlife and conservation in mind.

Golden-cheeked Warblers live in central Texas in forests with oak and juniper trees. Old juniper trees produce bark in strips which these birds use to build their nests. They only build nests in Texas, which is why it is so important that their habitat is conserved and not broken up and cleared for urban development and houses.

Threatened and Endangered Species in Texas The black-footed ferret has become endangered due to the relationship with its prey, the prairie dog. Prairie dogs live in open grassland habitats called prairies. As prairie dog numbers decline due to factors such as disease, urban

on the habitat formed by the aquifer’s rock formations and caves. There are many threatened and endangered species of invertebrates, such as beetles and spiders that live in these caves and even amphibians like the Texas Blind Salamander. Conserving water and reducing pollution are very important to maintaining a healthy spring ecosystem and the survival of these species.

One bird that is slowly on its way to recovery is the Whooping Crane. They migrate great distances across the United States and need wetlands along their migratory path to feed and roost. In the wintertime, they nest in the wetlands along the coast of Texas and spend summers in Canada. During migration, they are threatened by habitat loss and powerlines. They are also very sensitive to humans, so if you see a Whooping Crane in the wild, it is best to keep your distance so it is not disturbed. While they are still in danger, Whooping Crane populations are showing positive growth due to conservation efforts and habitat restoration projects. The Texas Horned Lizard is the state reptile of Texas and is an example of an animal that is state threatened, but has stable populations in other parts of its range. Like all the wildlife in this issue, they are threatened by habitat loss, but they are also affected by pesticides. Horned lizards are

With all of these animals, biologists are conducting research into ways to slow their decline and improve their populations to a more healthy level. In some cases, these conservation practices have shown a positive impact in wildlife communities, and maybe one day these species will be removed from the endangered species list. There are many other species of wildlife that are threatened and endangered in Texas, besides these few we discussed. You can help by researching threatened and endangered wildlife in your area and telling people what you learn. You can also help biologists by tracking wildlife using the iNaturalist app. The more we know, the more we can help these amazing animals.

insectivores and eat ants. If they consume an insect that ate a plant treated with pesticide, then the lizard will also become sick. Landowners are working to restore the habitat where these lizards previously lived in large numbers and zoos are breeding populations of horned lizards to be released back into the wild. Hopefully with these efforts, one day the Texas Horned Lizard will be back to healthy populations again in Texas.

Some plants and animals are endangered or threatened because they must live in a very specific and uncommon habitat; one example is a spring ecosystem. A spring is an ecosystem where water comes up out of the ground from an underground rock formation known as an aquifer. Some rivers begin as a spring which produces very clean water that is filtered by the aquifer. Because the water comes from underground, it is also cool which creates a clean habitat with a controlled temperature year-round. Fish, like the Fountain Darter and amphibians like the San Marcos Salamander pictured at the beginning of this article, rely on the flowing water and controlled temperature of spring-fed rivers which are only found in central Texas. Wildlife also rely

Find and circle these words in the word search.

Nancyâ&#x20AC;&#x2122;s Corner Conserve water. Research a threatened or endangered animal in your area. Provide food for wildlife by planting a pesticide-free garden of native plants. Visit a local park or nature preserve to see and learn about wildlife in your area.

Start a recycling club at your school.

TWA is a membership-based, non-profit organization whose goal is to educate all people, especially the youth of Texas about conservation, management and stewardship of wildlife and habitat on private land. All education programs are made possible through memberships, grants and donations. Learn more about the levels of membership as well as the educational programs TWA offers on our website. All membership levels include a one-year subscription to the TWA monthly Texas Wildlife magazine.

* If you are an educator in the Texas please call the TWA office at 800-TEX-WILD for our educator discount. 77

Providing essential funding to the education programs of Texas Wildlife Association Please consider making a tax-deductible investment to TWAF, and help us as we continue to change minds and lives, through natural resource education. Together, we can make sure that Texans understand the importance of wild things, wild places, and the stewards who care for them.