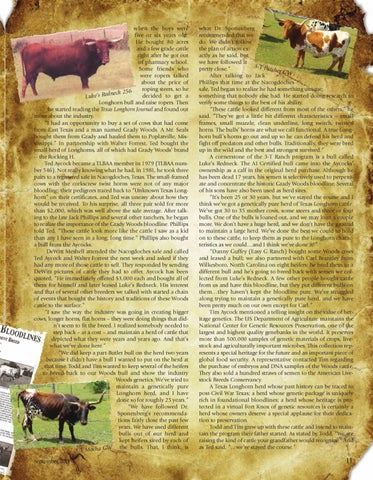 when the boys were five or six years old. He bought 80 acres and a few grade cattle right after he got out of pharmacy school. Some friends who were ropers talked about the price of roping steers, so he neck 256 decided to get a Luke’s Red Longhorn bull and raise ropers. Then he started reading the Texas Longhorn Journal and found out more about the industry. “I had an opportunity to buy a set of cows that had come from East Texas and a man named Grady Woods. A Mr. Seals bought them from Grady and hauled them to Poplarville, Mississippi.” In partnership with Walter Forrest, Ted bought the small herd of Longhorns, all of which had Grady Woods’ brand -- the Rocking H. Ted Aycock became a TLBAA member in 1979 (TLBAA number 546). Not really knowing what he had, in 1981, he took three pairs to a registered sale in Nacogdoches, Texas. The small-framed cows with the corkscrew twist horns were not of any major bloodline; their pedigrees traced back to “Unknown Texas Longhorn” on their certificates, and Ted was uneasy about how they would be received. To his surprise, all three pair sold for more than $2,000, which was well above the sale average. After talking to the late Jack Phillips and several other ranchers, he began to realize the importance of the Grady Woods bloodline. Phillips told Ted, “These cattle look more like the cattle I saw as a kid than any I have seen in a long, long time.” Phillips also bought a bull from the Aycocks. DeWitt Meshell attended the Nacogdoches sale and called Ted Aycock and Walter Forrest the next week and asked if they had any more of those cattle to sell. They responded by sending DeWitt pictures of cattle they had to offer. Aycock has been quoted, “He immediately offered $3,000 each and bought all of them for himself and later leased Luke’s Redneck. His interest and that of several other breeders we talked with started a chain of events that bought the history and traditions of these Woods cattle to the surface.” “I saw the way the industry was going in creating bigger cows, longer horns, flat horns – they were doing things that didn’t seem to fit the breed. I realized somebody needed to step back – at a cost – and maintain a herd of cattle that depicted what they were years and years ago. And that’s what we’ve done here.” “We did keep a part-Butler bull on the herd two years because I didn’t have a bull I wanted to put on the herd at that time. Todd and Tim wanted to keep several of the heifers to breed back to our Woods bull and show the industry Woods genetics. We’ve tried to maintain a genetically pure Longhorn herd, and I have done so for roughly 25 years.” “We have followed Dr. Sponenberg’s recommendations fairly close the past few years. We have used different bulls out of our herd and kept heifers sired by each of the bulls. That, I think, is W G Mocha

what Dr. Sponenberg recommended that we do. We didn’t follow the plan of action exactly as he said, but we have followed it 3-T Pa pretty close.” tches G W After talking to Jack Phillips that time at the Nacogdoches sale, Ted began to realize he had something unique; something that nobody else had. He started doing research to verify some things to the best of his ability. “These cattle looked different from most of the others,” he said. “They’ve got a little bit different characteristics – small frames, small muzzle, clean underline, long switch, twisted horns. The bulls’ horns are what we call functional. A true Longhorn bull’s horns go out and up so he can defend his herd and fight off predators and other bulls. Traditionally, they were bred up in the wild and the best and strongest survived.” A cornerstone of the 3-T Ranch program is a bull called Luke’s Redneck. The AI Certified bull came into the Aycocks’ ownership as a calf in the original herd purchase. Although he has been dead 17 years, his semen is selectively used to perpetuate and concentrate the historic Grady Woods bloodline. Several of his sons have also been used as herd sires. “It’s been 25 or 30 years, but we’ve stayed the course and I think we’ve got a genetically pure herd of Texas Longhorn cattle. We’ve got 30 to 35 mother cows, some steers and three or four bulls. One of the bulls is loaned out, and we may loan a couple more. We don’t have a huge herd, and we don’t have the ground to maintain a large herd. We’ve done the best we could to hold on to these cattle, to keep them as pure to the Longhorn characteristics as we could…and I think we’ve done it!” “Danny Guffey (Easy G Ranch) bought some Woods cows and leased a bull; we also partnered with Carl Brantley from Wilkesboro, North Carolina on eight heifers; he bred them to a different bull and he’s going to breed back with semen we collected from Luke’s Redneck. A few other people bought cattle from us and have this bloodline, but they put different bulls on them…they haven’t kept the bloodline pure. We’ve struggled along trying to maintain a genetically pure herd, and we have been pretty much on our own except for Carl.” Tim Aycock mentioned a telling insight on the value of heritage genetics. The US Department of Agriculture maintains the National Center for Genetic Resources Preservation, one of the largest and highest quality genebanks in the world. It preserves more than 500,000 samples of genetic materials of crops, livestock and agriculturally important microbes. This collection represents a special heritage for the future and an important piece of global food security. A representative contacted Tim regarding the purchase of embryos and DNA samples of the Woods cattle. They also sold a hundred straws of semen to the American Livestock Breeds Conservancy. A Texas Longhorn herd whose past history can be traced to post-Civil War Texas; a herd whose genetic package is uniquely rich in foundational bloodlines; a herd whose heritage is protected in a virtual Fort Knox of genetic resources is certainly a herd whose owners deserve a special applause for their dedication to preservation. Todd and Tim grew up with these cattle and intend to maintain the program their father started. As stated by Todd, “We are raising the kind of cattle your grandfather would recognize.” And as Ted said, “…we’ve stayed the course.”

Official Publication of the Texas Longhorn Breeders Association of America