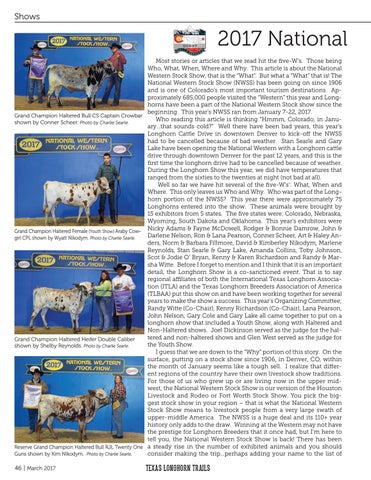 2017 National Most stories or articles that we read hit the five-W’s. Those being Who, What, When, Where and Why. This article is about the National Western Stock Show, that is the “What”. But what a “What” that is! The National Western Stock Show (NWSS) has been going on since 1906 and is one of Colorado’s most important tourism destinations. Approximately 685,000 people visited the “Western” this year and Longhorns have been a part of the National Western Stock show since the beginning. This year’s NWSS ran from January 7-22, 2017. Grand Champion Haltered Bull CS Captain Crowbar Who reading this article is thinking “Hmmm, Colorado, in Janushown by Conner Scheer. Photo by Charlie Searle. ary…that sounds cold?” Well there have been bad years, this year’s Longhorn Cattle Drive in downtown Denver to kick-off the NWSS had to be cancelled because of bad weather. Stan Searle and Gary Lake have been opening the National Western with a Longhorn cattle drive through downtown Denver for the past 12 years, and this is the first time the longhorn drive had to be cancelled because of weather. During the Longhorn Show this year, we did have temperatures that ranged from the sixties to the twenties at night (not bad at all). Well so far we have hit several of the five-W’s’: What, When and Where. This only leaves us Who and Why. Who was part of the Longhorn portion of the NWSS? This year there were approximately 75 Longhorns entered into the show. These animals were brought by 15 exhibitors from 5 states. The five states were: Colorado, Nebraska, Wyoming, South Dakota and Oklahoma. This year’s exhibitors were Grand Champion Haltered Female (Youth Show) Araby Cow- Nicky Adams &amp; Fayne McDowell, Rodger &amp; Bonnie Damrow, John &amp; Darlene Nelson, Ron &amp; Lana Pearson, Conner Scheer, Art &amp; Haley Angirl CPL shown by Wyatt Nikodym. Photo by Charlie Searle. ders, Norm &amp; Barbara Fillmore, David &amp; Kimberley Nikodym, Marlene Reynolds, Stan Searle &amp; Gary Lake, Amanda Collins, Toby Johnson, Scot &amp; Jodie O’ Bryan, Kenny &amp; Karen Richardson and Randy &amp; Marsha Witte. Before I forget to mention and I think that it is an important detail, the Longhorn Show is a co-sanctioned event. That is to say regional affiliates of both the International Texas Longhorn Association (ITLA) and the Texas Longhorn Breeders Association of America (TLBAA) put this show on and have been working together for several years to make the show a success. This year’s Organizing Committee; Randy Witte (Co-Chair), Kenny Richardson (Co-Chair), Lana Pearson, John Nelson, Gary Cole and Gary Lake all came together to put on a longhorn show that included a Youth Show, along with Haltered and Non-Haltered shows. Joel Dickinson served as the judge for the haltered and non-haltered shows and Glen West served as the judge for Grand Champion Haltered Heifer Double Caliber the Youth Show. shown by Shelby Reynolds. Photo by Charlie Searle. I guess that we are down to the “Why” portion of this story. On the surface, putting on a stock show since 1906, in Denver, CO, within the month of January seems like a tough sell. I realize that different regions of the country have their own livestock show traditions. For those of us who grew up or are living now in the upper midwest, the National Western Stock Show is our version of the Houston Livestock and Rodeo or Fort Worth Stock Show. You pick the biggest stock show in your region – that is what the National Western Stock Show means to livestock people from a very large swath of upper-middle America. The NWSS is a huge deal and its 110+ year history only adds to the draw. Winning at the Western may not have the prestige for Longhorn Breeders that it once had, but I’m here to tell you, the National Western Stock Show is back! There has been Reserve Grand Champion Haltered Bull RJL Twenty One a steady rise in the number of exhibited animals and you should Guns shown by Kim Nikodym. Photo by Charlie Searle. consider making the trip…perhaps adding your name to the list of 46 | March 2017

The Official Publication of the Texas Longhorn Breeders Association of America