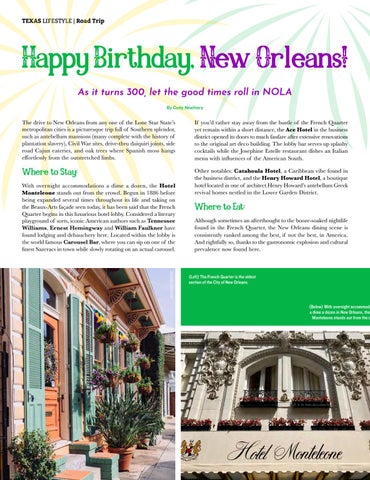 The drive to New Orleans from any one of the Lone Star State’s metropolitan cities is a picturesque trip full of Southern splendor, such as antebellum mansions (many complete with the history of plantation slavery), Civil War sites, drive-thru daiquiri joints, side road Cajun eateries, and oak trees where Spanish moss hangs effortlessly from the outstretched limbs.

If you’d rather stay away from the bustle of the French Quarter yet remain within a short distance, the Ace Hotel in the business district opened its doors to much fanfare after extensive renovations to the original art deco building. The lobby bar serves up splashy cocktails while the Josephine Estelle restaurant dishes an Italian menu with influences of the American South.

Other notables: Catahoula Hotel, a Caribbean vibe found in the business district, and the Henry Howard Hotel, a boutique hotel located in one of architect Henry Howard’s antebellum Greek revival homes nestled in the Lower Garden District.

With overnight accommodations a dime a dozen, the Hotel Monteleone stands out from the crowd. Begun in 1886 before being expanded several times throughout its life and taking on the Beaux-Arts façade seen today, it has been said that the French Quarter begins in this luxurious hotel lobby. Considered a literary playground of sorts, iconic American authors such as Tennessee Williams, Ernest Hemingway and William Faulkner have found lodging and debauchery here. Located within the lobby is the world famous Carousel Bar, where you can sip on one of the finest Sazeracs in town while slowly rotating on an actual carousel.

Where to Eat: Although sometimes an afterthought to the booze-soaked nightlife found in the French Quarter, the New Orleans dining scene is consistently ranked among the best, if not the best, in America. And rightfully so, thanks to the gastronomic explosion and cultural prevalence now found here.

(Left) The French Quarter is the oldest section of the City of New Orleans.

(Below) With overnight accommoda a dime a dozen in New Orleans, the Monteleone stands out from the c