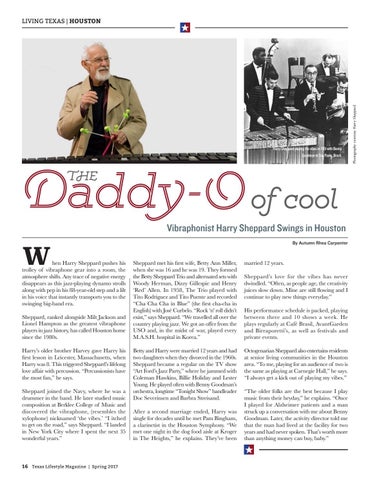 Harry Sheppard playing the vibes in 1961 with Benny Goodman in San Paolo, Brazil.

Daddy-O of cool THE

hen Harry Sheppard pushes his trolley of vibraphone gear into a room, the atmosphere shifts. Any trace of negative energy disappears as this jazz-playing dynamo strolls along with pep in his 88-year-old step and a lilt in his voice that instantly transports you to the swinging big-band era. Sheppard, ranked alongside Milt Jackson and Lionel Hampton as the greatest vibraphone players in jazz history, has called Houston home since the 1980s. Harry’s older brother Harvey gave Harry his first lesson in Leicester, Massachusetts, when Harry was 8. This triggered Sheppard’s lifelong love affair with percussion. “Percussionists have the most fun,” he says. Sheppard joined the Navy, where he was a drummer in the band. He later studied music composition at Berklee College of Music and discovered the vibraphone, (resembles the xylophone) nicknamed ‘the vibes.’ “I itched to get on the road,” says Sheppard. “I landed in New York City where I spent the next 35 wonderful years.”

Sheppard met his first wife, Betty Ann Miller, when she was 16 and he was 19. They formed the Betty Sheppard Trio and alternated sets with Woody Herman, Dizzy Gillespie and Henry ‘Red’ Allen. In 1958, The Trio played with Tito Rodriguez and Tito Puente and recorded “Cha Cha Cha in Blue” (the first cha-cha in English) with José Curbelo. “Rock ‘n' roll didn’t exist,” says Sheppard. “We travelled all over the country playing jazz. We got an offer from the USO and, in the midst of war, played every M.A.S.H. hospital in Korea.”

Betty and Harry were married 12 years and had two daughters when they divorced in the 1960s. Sheppard became a regular on the TV show “Art Ford’s Jazz Party,” where he jammed with Coleman Hawkins, Billie Holiday and Lester Young. He played often with Benny Goodman’s orchestra, longtime “Tonight Show” bandleader Doc Severinsen and Barbra Streisand.

Octogenarian Sheppard also entertains residents at senior living communities in the Houston area. “To me, playing for an audience of two is the same as playing at Carnegie Hall,” he says. “I always get a kick out of playing my vibes.”

After a second marriage ended, Harry was single for decades until he met Pam Bingham, a clarinetist in the Houston Symphony. “We met one night in the dog food aisle at Kroger in The Heights,” he explains. They’ve been

Sheppard’s love for the vibes has never dwindled. “Often, as people age, the creativity juices slow down. Mine are still flowing and I continue to play new things everyday.” His performance schedule is packed, playing between three and 10 shows a week. He plays regularly at Café Brasil, AvantGarden and Birraporetti’s, as well as festivals and private events.

“The older folks are the best because I play music from their heyday,” he explains. “Once I played for Alzheimer patients and a man struck up a conversation with me about Benny Goodman. Later, the activity director told me that the man had lived at the facility for two years and had never spoken. That’s worth more than anything money can buy, baby.”