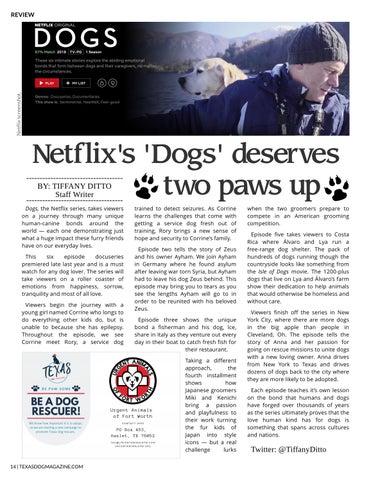 Dogs, the Netflix series, takes viewers on a journey through m any unique hum an-canine bonds around the world ? each one dem onstrating just what a huge im pact these furry friends have on our everyday lives. This six episode docuseries prem iered late last year and is a m ust watch for any dog lover. The series will take viewers on a roller coaster of em otions from happiness, sorrow, tranquility and m ost of all love. Viewers begin the journey with a young girl nam ed Corrine who longs to do everything other kids do, but is unable to because she has epilepsy. Throughout the episode, we see Corrine m eet Rory, a service dog

trained to detect seizures. As Corrine learns the challenges that com e with getting a service dog fresh out of training, Rory brings a new sense of hope and security to Corrine?s fam ily. Episode two tells the story of Zeus and his owner Ayham . We join Ayham in Germ any where he found asylum after leaving war torn Syria, but Ayham had to leave his dog Zeus behind. This episode m ay bring you to tears as you see the lengths Ayham will go to in order to be reunited with his beloved Zeus. Episode three shows the unique bond a fisherm an and his dog, Ice, share in Italy as they venture out every day in their boat to catch fresh fish for their restaurant. Taking a different approach, the fourth installm ent shows how Japanese groom ers Miki and Kenichi bring a passion and playfulness to their work turning the fur kids of Japan into style icons ? but a real challenge lurks

when the two groom ers prepare to com pete in an Am erican groom ing com petition. Episode five takes viewers to Costa Rica where Ă lvaro and Lya run a free-range dog shelter. The pack of hundreds of dogs running though the countryside looks like som ething from the Isle of Dogs m ovie. The 1200-plus dogs that live on Lya and Ă lvaro?s farm show their dedication to help anim als that would otherwise be hom eless and without care. Viewers finish off the series in New York City, where there are m ore dogs in the big apple than people in Cleveland, Oh. The episode tells the story of Anna and her passion for going on rescue m issions to unite dogs with a new loving owner. Anna drives from New York to Texas and drives dozens of dogs back to the city where they are m ore likely to be adopted. Each episode teaches it ?s own lesson on the bond that hum ans and dogs have forged over thousands of years as the series ultim ately proves that the love hum an kind has for dogs is som ething that spans across cultures and nations. 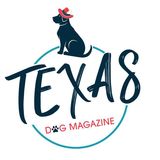