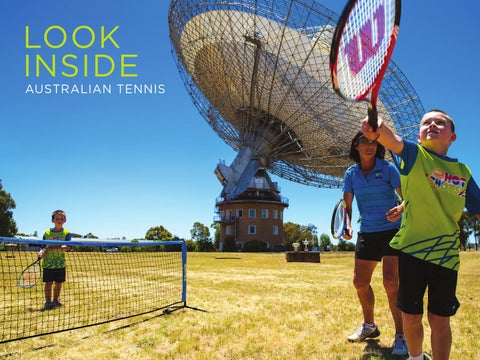 “One of the things I love about tennis is how it can bring communities together and today is a perfect illustration of that. To see people of all ages engaged in the sport was tremendous.” Alicia Molik at Parkes, NSW

TAKING TENNIS TO AUSTRALIA The largest national participation drive – AO Blitz – visited more than 100 towns in 2013. It encouraged people to play tennis, participate in speed serve and a variety of tennis-themed activities. It also provided the unique opportunity of having their photo taken with the Australian Open trophies or Nickelodeon characters at selected locations. Former world No.8 Alicia Molik helped 772 people from

Parkes in Central Western New South Wales smash the world record of bouncing balls on tennis racquets in November 2013. The national online competition also allowed people who play tennis, and those who have never picked up a racquet, the chance to complete challenges to win major prizes and have an Australian Open 2014 player represent their local town or community.

DO SOMETHING AUSTRALIAN A new initiative supported by the Australian Government was piloted in January 2013. Suburban and regional tennis clubs opened their doors on our national day to celebrate cultural diversity through sport. In the spirit of social cohesion, tennis clubs connected with community groups to offer a fun-filled day of festivities

and tennis activities. The celebrations were also held at Melbourne Park during Australian Open 2013 as newly arrived refugees played tennis for the very first time on the Australian Open courts. This was the prelude to a heartfelt Citizenship Ceremony conferring in new Australians.

Suburban and regional tennis clubs opened their doors on our national day to celebrate cultural diversity through sport.

A FIRST EXPERIENCE Tennis Australiaâ&#x20AC;&#x2122;s development program, MLC Tennis Hot Shots, provides primary schoolaged children with a fun and easy start to the game. The use of modified courts, low-compression balls and smaller racquets help kids play and rally from their very first experience. There were 604,989 kids around the country who participated in the program

of children first hear about MLC Tennis Hot Shots through their local school.

through the 1844 dedicated deliverers including local coaches, schools and community play clubs nationally. The National School Partnership program provides all children with a pathway to continue their involvement in a fun and supportive environment directly through their local MLC Tennis Hot Shots coach or Community Play club.

TRANSITION Project Talent brings together multiple facets helping a player to develop. This includes capturing athletes, providing quality education for coaches, offering competition opportunities, such as the leading Super 10s, and national camps. All these elements support the transition of young talent toward professional tennis. The third National Talent Development Camp was held in Canberra in 2013.

Talent Development Camps were held in every state and territory with 1142 athletes and 267 private coaches participating.

of participants were not playing tennis at the time they started Cardio Tennis.

THE SOCIAL ASPECT Tennis promotes significant health benefits and Cardio Tennis engages participants in a high-energy format. Close to 600 coaches and fitness trainers at more than 800 venues deliver the program to more than 17,000 participants. Of these participants, 72 percent are female. Consumer research respondents indicated fitness, variety and fun

as three main drivers for participating and Cardio Tennis was endorsed by Physical Activity Australia and Fitness Australia. There were also 35 schools that were part of the Cardio Tennis in Secondary Schools pilot program in which 2000 students took 24 million steps during the four-week program.

… TO IMPROVE YOUR HEALTH

PROVIDING OPPORTUNITIES Tennis Australia works in partnership with its state/territory bodies and the Australian Sports Commission in providing a national framework for the inclusion of people with sensory, physical, psychological and intellectual disabilities to be involved and participate in tennis.

As a result, Tennis Australia has successfully attained Sports CONNECT Platinum status. Sports CONNECT is a national framework that works to build pathways for people with a disability to get involved in sport, by creating and developing relationships between sports and disability organisations.

Playing opportunities are available for all age groups and include social competition as well as tournaments.

At the other end of the spectrum, Tennis Seniors Australia helps by increasing the playing opportunities and social interactions for tennis players over the age of 35. There are more than 1000 players who compete for the Teams Trophy at the Australian Tennis Championships each year.

The fun days aim to increase tennis participation among Indigenous boys and girls, and help improve their health, education and employment opportunities.

quality coaching programs and pathways, which cater for the needs of players within the community. Coaches play an integral part in actively growing the game and also help players go from coaching programs into competitions and tournaments.

… WITH A HELPING HAND

QUALITY PLACES TO PLAY The National Court Rebate Scheme assists member affiliates and local government in the development of new or upgraded tennis courts and associated infrastructure. This program provides better courts and facilities across the nation. Since 2007, the scheme has

Since 2007, the scheme has stimulated more than 1500 new or resurfaced courts and a total project value of

Saturday) with the number of patrons amounting to 80,735. In addition, the AsiaPacific region accounted for 57 percent of total global broadcast exposure, reaching a cumulative audience in excess of 172 million viewers for Australian Open 2013.

BEHIND THE SCENES Involvement in the sport extends off the court. 5000 staff, contractors and volunteers were employed by Tennis Australia, Melbourne Olympic Parks Trust (MOPT) and catering suppliers Delaware North for the tournament fortnight at Australian Open 2013. There are more than 720 journalists, photographers and videographers providing detailed coverage of the Australian Open including 315 international media from 40 different

countries. In addition, more than 1000 broadcast media are accredited, covering more than 27 networks and broadcasting to more than 200 countries. Matches are officiated by 343 umpires and linespersons from approximately 30 countries, including China, Egypt, Greece, Norway and Brazil and there were over 380 ballkids including 338 from Victoria, 23 from interstate, 20 from Korea and six from China.

Matches ARE officiated by 343 umpires and linespersons from approximately 30 countries â&#x20AC;Ś and there were over

The achievements, performances and contributions OF the wider tennis fraternity including volunteers, coaches, clubs, tournaments and officials pave the way for people to play the great sport of tennis at all levels.

For full reports referenced in this publication, please email tennisindustry@tennis.com.au 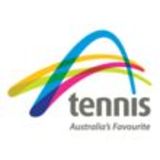