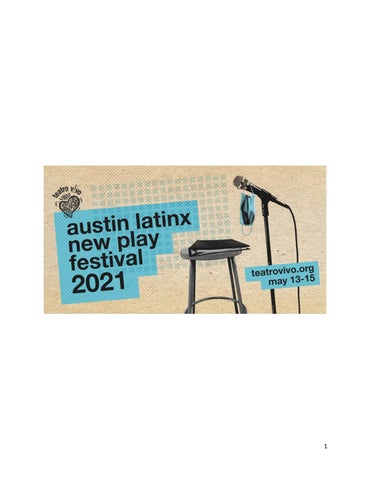 Machine Learning Francisco Mendoza Playwright Bio: Francisco Mendoza was born in the wine region of Mendoza, Argentina, and even as a kid he was passionate about storytelling, spending every house-chores-earned peso at the used books store. He dreamed of traveling the world like his literary heroes, a dream that became real when he was twelve and his family relocated to Brazil. After graduating from Journalism school, he pursued a career in marketing, but the child reader in him kept pushing him to tell stories, and he eventually received a fellowship at the Tisch School of the Arts&#39; Dramatic Writing MFA program. Moving countries, a second time, Francisco is now pursuing a cross-medium writing career in New York, which has thus far spanned plays, a full season of a podcast, several short stories, and a few opinion pieces. For more about his work and a comprehensive (if boring) list of credits, visit notrealmendoza.com Synopsis of Play: When his estranged, alcoholic father is diagnosed with liver cancer, computer scientist Jorge dreams up a nursing app to manage the disease in his stead. As the machine&#39;s capabilities grow, however, the possibility of leaving it in charge of the treatment becomes more real, forcing Jorge to reckon with his responsibilities as a son—and as a creator.

Synopsis of Play: When Diana, a ruthless and power-hungry Pilates influencer, learns her social media manager Teodoro is hooking up with her makeup artist Madeinusa, it sparks bitter jealousy. Even though it would be social suicide for her to date someone with zero followers, Diana finds herself falling madly in love but if she can’t have Teodoro . . . no one can!

Have to Believe we Are Magic Sara Guerrero Playwright Bio: (she/hers) a Southern California Chicana native of Mexican, Mestizo ancestry, is a professional versatile theatre artist whose mission is to model, share, and create theatremaking opportunities for and with her community. A CalArts alum, she has been recognized as a 2020 Hispanic Lifestyle Latina of Influence Honoree, a 2020 Woman of Distinction by Sen. Umberg and California Senate District 34, a Community Engagement &quot;COVID-19 ARTIST ASSISTANCE GRANT&quot; Awardee, one of the “People to Watch” by American Theatre Magazine, and “Best [Artistic] Director” and “Person of Interest” by OC WEEKLY. As the founding artistic director of Breath of Fire Latina Theater Ensemble, an award-winning, Santa Ana-based group, she and the ensemble are Artists-inresidence at Grand Central Arts Center of California State University of Fullerton. Under Guerrero’s leadership, the organization serves as an incubator for underrepresented voices in theater by providing free programming and guidance in the art of storytelling. During the pandemic Guerrero continues to write, direct, act, create, and produce through her ensemble and other theaters online. www.teatroguerrero.com / IS: @guerreroprincess / twitter: @teatroguerrero Synopsis of Play: A Latinx coming-of-age, life after high school, roller skating, and making big life decisions story, in the summer of 1994. All under the shadow of &quot;the Magic Kingdom,&quot; in Orange County, California.”

HAVE TO BELIEVE WE ARE MAGIC by Sara Guerrero Si Mon&#39; Emmett

Los Pochos Herbert Siguenza Playwright Bio: Herbert Siguenza is currently the Playwright in Residence for the San Diego Repertory Theatre thanks to a generous grant from the Andrew W. Mellon Foundation. Herbert is a founding member of the Chicanx/Latnx performance group CULTURE CLASH celebrating 36 years in the American theatre. For over twenty years, Herbert and Culture Clash created a series of plays based off oral histories of immigrant residents from different cities and neighborhoods throughout America. Their collectively created plays include A Bowl of Beings, Chavez Ravine, Culture Clash in AmeriCCA and American Night. As a solo writer and performer Mr. Siguenza has produced Cantinflas!, A Weekend with Pablo Picasso, Steal Heaven , El Henry (Best new play San Diego Critics Circle Award 2014), Manifest Destinitis, Beachtown and Bad Hombres/Good Wives for the San Diego Rep. He is currently writing a play about the 1970 community takeover of Chicano Park in San Diego’s Logan Heights district. Mr. Siguenza is also an accomplished visual artist and has exhibited both nationally and internationally. He has a BFA in printmaking from the California College of Arts, Oakland, California. TV and Film credits: “Ben Ten Alien Swarm” for the Cartoon Network, “Larry Crowne” feature film directed by Tom Hanks. His voice was prominently featured in Pixar’s 2017 Oscar winning animation feature, “Coco”. Synopsis of Play: Los Pochos by Herbert Siguenza is a classic post war American drama about a Mexican- American family living in Corpus Christi, Texas in 1955. A rich Mexican woman disrupts the home of a modest immigrant family and exposes their deep family secrets and unfulfilled dreams. 10

Teatro Vivo is proud to present the 2021 Austin Latinx New Play Festival in collaboration with ScriptWorks. The 2021 Austin Latinx New Play Festival (ALNPF), presented in collaboration with ScriptWorks, will take place on a digital platform May 13 to May 15, 2021. For a PDF of this virtual program, email us at teatrovivoaustin@gmail.com.