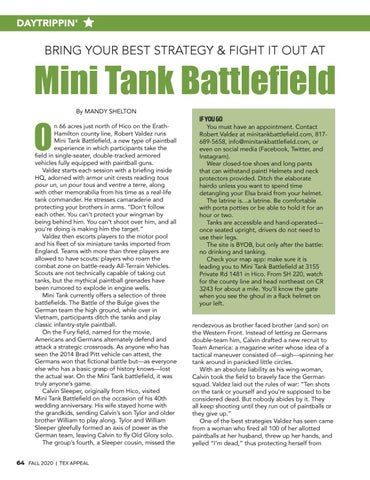 BRING YOUR BEST STRATEGY &amp; FIGHT IT OUT AT

n 66 acres just north of Hico on the ErathHamilton county line, Robert Valdez runs Mini Tank Battlefield, a new type of paintball experience in which participants take the field in single-seater, double-tracked armored vehicles fully equipped with paintball guns. Valdez starts each session with a briefing inside HQ, adorned with armor unit crests reading tous pour un, un pour tous and ventre a terre, along with other memorabilia from his time as a real-life tank commander. He stresses camaraderie and protecting your brothers in arms. “Don’t follow each other. You can’t protect your wingman by being behind him. You can’t shoot over him, and all you’re doing is making him the target.” Valdez then escorts players to the motor pool and his fleet of six miniature tanks imported from England. Teams with more than three players are allowed to have scouts: players who roam the combat zone on battle-ready All-Terrain Vehicles. Scouts are not technically capable of taking out tanks, but the mythical paintball grenades have been rumored to explode in engine wells. Mini Tank currently offers a selection of three battlefields. The Battle of the Bulge gives the German team the high ground, while over in Vietnam, participants ditch the tanks and play classic infantry-style paintball. On the Fury field, named for the movie, Americans and Germans alternately defend and attack a strategic crossroads. As anyone who has seen the 2014 Brad Pitt vehicle can attest, the Germans won that fictional battle but—as everyone else who has a basic grasp of history knows—lost the actual war. On the Mini Tank battlefield, it was truly anyone’s game. Calvin Sleeper, originally from Hico, visited Mini Tank Battlefield on the occasion of his 40th wedding anniversary. His wife stayed home with the grandkids, sending Calvin’s son Tylor and older brother William to play along. Tylor and William Sleeper gleefully formed an axis of power as the German team, leaving Calvin to fly Old Glory solo. The group’s fourth, a Sleeper cousin, missed the

You must have an appointment. Contact Robert Valdez at minitankbattlefield.com, 817689-5658, info@minitankbattlefield.com, or even on social media (Facebook, Twitter, and Instagram). Wear closed-toe shoes and long pants that can withstand paint! Helmets and neck protectors provided. Ditch the elaborate hairdo unless you want to spend time detangling your Elsa braid from your helmet. The latrine is…a latrine. Be comfortable with porta potties or be able to hold it for an hour or two. Tanks are accessible and hand-operated— once seated upright, drivers do not need to use their legs. The site is BYOB, but only after the battle: no drinking and tanking. Check your map app: make sure it is leading you to Mini Tank Battlefield at 3155 Private Rd 1481 in Hico. From SH 220, watch for the county line and head northeast on CR 3243 for about a mile. You’ll know the gate when you see the ghoul in a flack helmet on your left. rendezvous as brother faced brother (and son) on the Western Front. Instead of letting ze Germans double-team him, Calvin drafted a new recruit to Team America: a magazine writer whose idea of a tactical maneuver consisted of—sigh—spinning her tank around in panicked little circles. With an absolute liability as his wing-woman, Calvin took the field to bravely face the German squad. Valdez laid out the rules of war: “Ten shots on the tank or yourself and you’re supposed to be considered dead. But nobody abides by it. They all keep shooting until they run out of paintballs or they give up.” One of the best strategies Valdez has seen came from a woman who fired all 100 of her allotted paintballs at her husband, threw up her hands, and yelled “I’m dead,” thus protecting herself from

This issue puts Central Texas healthcare professionals in the spotlight. 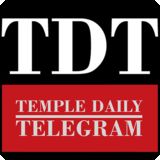