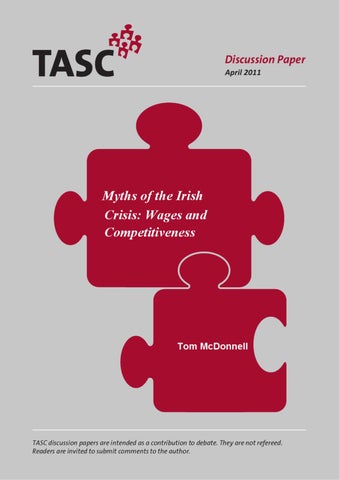 TASC discussion papers are intended as a contribution to debate. They are not refereed. Readers are invited to submit comments to the author.

Introduction 1. The findings of the independent review of the framework of statutory wage setting mechanisms known as Employment Regulation Orders (ERO) and Registered Employment Agreements (REA) are due shortly. This discussion paper is a companion piece to TASCâ&amp;#x20AC;&amp;#x2122;s submission to that independent review (TASC, 2011) and addresses two related but distinct issues relevant to the debate. 2. In Section 1 we ask whether a loss of competiveness in Ireland contributed to the economic decline. It has repeatedly been asserted in the media and by lobby groups that Ireland became uncompetitive during the boom and that labour market inefficiencies contributed to this loss of competitiveness. However Ireland outperformed the OECD in terms of volume growth of exports during the boom, which implies no loss of competitiveness. Although Irelandâ&amp;#x20AC;&amp;#x2122;s ranking in the global competitiveness index has deteriorated in recent years, the World Economic Forum does not attribute this to labour market inefficiencies. A small market size; poor infrastructure; macroeconomic instability and dysfunctional financial markets are identified as the factors inhibiting competitiveness. 3. It has also been asserted that high labour costs are a contributory factor in Irelandâ&amp;#x20AC;&amp;#x2122;s high unemployment rate. In Section 2 we compare Irish and European labour costs in the two sectors most directly relevant to the framework of wage setting mechanisms. Eurostat data reveals that labour costs in the hospitality sector and wholesale/retail sector lag behind EU-15 averages in nominal terms and in terms of purchasing power parity.

Readers are invited to send comments, criticisms and suggestions to the author at tmcdonnell@tascnet.ie

Section 1: Competitiveness and the Crisis Failure of Regulation 4. A variety of theories have been forwarded to explain the Irish recession. The most straightforward and certainly the most compelling explanation for the crisis is that inappropriately loose monetary and fiscal policy interacted toxically with systemic regulatory failures in the banking sector. This toxic mix created a surge in private borrowing and an unsustainable boom in asset prices beginning in 2002. The economy became heavily distorted toward real estate and the sustainability of the public finances was compromised by an increasing overreliance on cyclical transaction taxes and overuse of tax breaks. Fiscal policy was incoherent, with the Government attempting to reconcile the provision of European level public services with one of the lowest tax takes in the OECD. 5. The economy collapsed in 2008 when the sub-prime crisis in the United States triggered a loss of confidence in the Irish banks and a general crisis in the global banking system. Banking crises are particularly costly and the severe recession and debt crisis that followed were entirely in keeping with historical international experience. The crisis created by the lack of regulation of the banking system was entirely predictable. As Reinhart and Rogoff (2009) point out â&amp;#x20AC;&amp;#x153;periods of high international capital mobility have repeatedly produced international banking crisesâ&amp;#x20AC;?. Kaminsky and Reinhart (1999) also provide evidence of the strong link between crises and financial liberalisation. Caprio and Klingebiel (1996) find that inadequate regulation and lack of supervision play a key role in explaining why deregulation and banking crises are so closely entwined. The failure of the Irish State to effectively regulate the banking system allowed finance capital to operate unsupervised and untrammelled. This failure of regulation was the primary cause of what was an avoidable crisis. 6. The severity of the crisis was compounded by the previous Governmentâ&amp;#x20AC;&amp;#x2122;s utter mismanagement of the public finances. This mismanagement obliterated the fiscal space required to engage in traditional counter-cyclical measures. The austerity policies that subsequently followed have amplified the duration and scale of the 2 Discussion Paper

economic collapse, for example by exacerbating the unemployment crisis (IMF, 2010).

Competitiveness 7. A competing narrative is that the economic and employment crisis in the Euro periphery (Ireland, Greece, Portugal, and Spain) has been partly caused by a loss of competitiveness in these countries. Those endorsing the competitiveness narrative as a cause of the ongoing crisis argue that labour market adjustments (wage reductions) in the periphery are required. This is because the normal recourse of currency devaluation is not available as an option for members of the euro area. 8. However, it is not clear that competitiveness is the central issue. As Gros (2011) has recently argued, the â&amp;#x20AC;&amp;#x2DC;market shareâ&amp;#x20AC;&amp;#x2122; of EU-27 exports has essentially remained unchanged over the last decade for each of the four peripherals (see Figure 1). If export performance is an indicator of competitiveness, then the data does not support the loss of competitiveness argument. Figure 1

driving a loss in Ireland’s competitiveness we would expect to see a disproportionate loss of global market share in service exports rather than in manufacturing exports. 12. To the extent that there was a loss of global market share in manufacturing exports, Breathnach (2010) identifies three contributory factors: Ireland’s under endowment in the fast-growing fuels and minerals subsector; Ireland’s over dependence on sectors heavily exposed to the imploding of the dot.com bubble; and the emergence of China as a major global competitor. 13. According to the Global Competitiveness Index published annually by the World Economic Forum (2010), Ireland marginally improved its competitiveness ranking from 30th position in 2002 to 29th in 2010. Small market size (54th), poor infrastructure (35th) and macroeconomic instability (95th) were identified as factors inhibiting competitiveness. Although Ireland’s ranking has declined since the middle of the last decade, the World Economic Forum primarily attributes this to the weakening macroeconomic environment as well as to continuing concerns related to financial markets (ranked 98th). 14. Labour costs were not identified as inhibiting Ireland’s competitiveness by the World Economic Forum (WEF) in its 2010 report. Ireland is identified as having a well functioning labour market (ranked 20th).

Section 2: The Unemployment Crisis and Labour Costs in the Low Paid Sectors 15. Ireland’s unemployment rate now exceeds the average rate prevalent in the European Union as a whole. The unemployment crisis is a function of the collapse of the construction sector and related sectors associated with the housing bubble; the lack of access to credit in the economy; the increased savings rate; and the fiscal consolidation measures enacted by the previous Government. An additional factor often proposed as a contributory factor in the unemployment crisis is the cost of labour. Figure 3

16. The wage setting mechanisms known as EROs and the Registered Employment Agreements (REAs) are principally concerned with low-wage sectors, most importantly the hospitality sector and the retail/wholesale sector. It has been claimed that high labour costs in these sectors (by Western European standards) are compounding the unemployment crisis. However data from Eurostat fails to support this contention. Figure 4 shows hourly labour costs in the hospitality sector for 2008, 6 Discussion Paper

18. What has happened to labour cost trends in the low income sectors since 2008? Figure 6 is derived from Eurostatâ&amp;#x20AC;&amp;#x2122;s labour cost indices. Labour costs in the EU-15 rose by 1.3 per cent in the hospitality sector between 2008 and 2010 and by 4.9 per cent in the wholesale/retail sector over the same period. By contrast, labour costs in Ireland declined in the hospitality sector and were just 1.3 per cent in the wholesale/retail sector. Note that Eurostat has not yet updated its labour cost indices to include France, Sweden and Denmark and consequently the numbers for the EU-15 as a whole are still provisional.

Section 3: Enhancing Competitiveness 20. The crisis was caused by a severe misallocation of investment towards the property sector, beginning in 2002/2003. This misallocation of investment itself led to a misallocation of human capital and distorted the labour market in an unsustainable manner. When the investment inevitably dried up, a surge in construction-related unemployment was the result. The subsequent loss of demand in the domestic economy disproportionally affected the retail and hospitality sectors. Loss of competitiveness was not a primary causal factor in the economic crisis. 21. Felipe and Kumar (2011) identify that it is not labour costs but unit labour costs that impact on competitiveness. The unit labour cost is the ratio of labour cost to labour productivity. A strategy focussed exclusively on reducing labour costs through wage reductions will simply reinforce the decline in domestic aggregate demand. Irelandâ&amp;#x20AC;&amp;#x2122;s long term growth strategy should be focussed instead on reducing unit labour cost through productivity gains. The long-term growth potential of any economy depends on productivity increases generated through innovation. These long-term productivity increases are best achieved by investing in education and R&amp;D. 22. Labour costs in the retail and hospitality sectors are lower than equivalent labour costs in the EU-15. Consequently the evidence does not support the argument that labour costs are driving high unemployment in these particular sectors. However this does not imply that no scope exists for measures to improve competitiveness. Ireland is a high cost location for many utilities including broadband (OECD, 2010), waste (ForfĂĄs, 2010) and electricity costs for SMEs. Other examples of high costs include those for professional services and office rental costs. In addition, the EU/IMF Memorandum of Understanding (Merrion Street, 2010) contains certain competitiveness enhancing measures which are welcome. There is a strong argument supporting the provision for legislation in the second quarter of 2011 removing restrictions to trade in the sheltered sectors (legal profession, pharmacists, doctors, dentists, accountants). Despite the downturn, legal service costs at the end of 2009 were over 18 per cent above their 2006 level (ForfĂĄs, 2010). Removing these restrictions should exert downward pressure on wages in these high-pay sectors. 11 Discussion Paper

Discussion paper on wages and competitiveness in Ireland 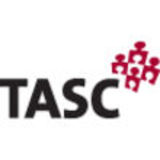