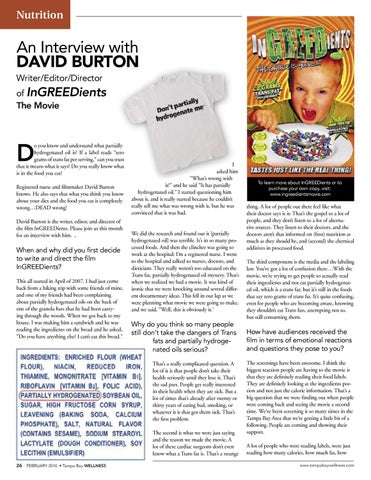 o you know and understand what partially hydrogenated oil is? If a label reads “zero grams of trans fat per serving,” can you trust that it means what it says? Do you really know what is in the food you eat? Registered nurse and ﬁlmmaker David Burton knows. He also says that what you think you know about your diet and the food you eat is completely wrong…DEAD wrong! David Burton is the writer, editor, and director of the ﬁlm InGREEDients. Please join us this month for an interview with him. ,

When and why did you ﬁrst decide to write and direct the ﬁlm InGREEDients? This all started in April of 2007. I had just come back from a hiking trip with some friends of mine, and one of my friends had been complaining about partially hydrogenated oils on the back of one of the granola bars that he had been carrying through the woods. When we got back to my house, I was making him a sandwich and he was reading the ingredients on the bread and he asked, “Do you have anything else? I can’t eat this bread.”

I asked him “What’s wrong with it?” and he said “It has partially hydrogenated oil.” I started questioning him about it, and it really started because he couldn’t really tell me what was wrong with it, but he was convinced that it was bad. We did the research and found out it [partially hydrogenated oil] was terrible. It’s in so many processed foods. And then the clincher was going to work at the hospital: I’m a registered nurse. I went to the hospital and talked to nurses, doctors, and dieticians. They really weren’t too educated on the Trans fat, partially hydrogenated oil mystery. That’s when we realized we had a movie. It was kind of ironic that we were knocking around several different documentary ideas. This fell in our lap as we were planning what movie we were going to make, and we said, “Well, this is obviously it.’

Why do you think so many people still don’t take the dangers of Trans fats and partially hydrogenated oils serious? That’s a really complicated question. A lot of it is that people don’t take their health seriously until they lose it. That’s the sad part. People get really interested in their health when they are sick. But a lot of times that’s already after twenty or thirty years of eating bad, smoking, or whatever it is that got them sick. That’s the ﬁrst problem. The second is what we were just saying and the reason we made the movie. A lot of these cardiac surgeons don’t even know what a Trans fat is. That’s a strange

To learn more about InGREEDients or to purchase your own copy, visit: www.ingreedientsmovie.com

thing. A lot of people out there feel like what their doctor says is it: That’s the gospel to a lot of people, and they don’t listen to a lot of alternative sources. They listen to their doctors, and the doctors aren’t that informed on (ﬁrst) nutrition as much as they should be, and (second) the chemical additives in processed food. The third component is the media and the labeling law. You’ve got a lot of confusion there…With the movie, we’re trying to get people to actually read their ingredients and not eat partially hydrogenated oil, which is a trans fat; but it’s still in the foods that say zero grams of trans fat. It’s quite confusing, even for people who are becoming aware, knowing they shouldn’t eat Trans fats, attempting not to, but still consuming them.

How have audiences received the ﬁlm in terms of emotional reactions and questions they pose to you? The screenings have been awesome. I think the biggest reaction people are having to the movie is that they are deﬁnitely reading their food labels. They are deﬁnitely looking at the ingredients portion and not just the calorie information. That’s a big question that we were ﬁnding out when people were coming back and seeing the movie a second time. We’ve been screening it so many times in the Tampa Bay Area that we’re getting a little bit of a following. People are coming and showing their support. A lot of people who were reading labels, were just reading how many calories, how much fat, how www.tampabaywellness.com 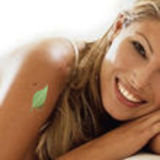