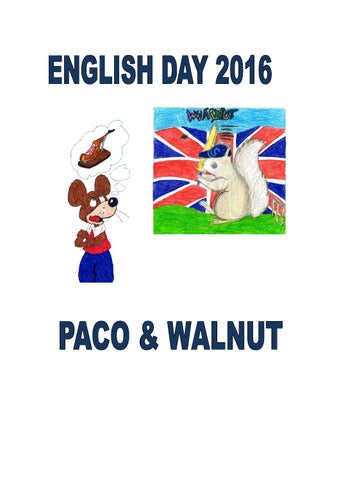 This is the most famous squirrel in the world. His name is Walnut and he is thirteen years old. He is strong and very fast. He’s from Hyde Park and he lives in Hyde Park too. He likes sports very much, and he usually plays cricket, football and ice hockey matches. His cricket team name is “The Squirrels”. He is the best player, there! Last year they won the national competition. He likes playing the drums too and his favourite rock band is Greenday. His favourite food is walnuts, and his favourite drink is green tea. One day, he met a boy who told him about the English Day in Sant Just Desvern. He really liked it, so he decided to come here to teach English and how to play cricket to the St. Just students. He found Sant Just in a map and he went to the airport to travel there very quickly, because he didn’t want to miss the English Day.

Hello! I am Paco, but here in London everyone calls me “Pacou”. I was born in Madrid but when I was a child my parents came to London to work in Buckingham Palace as a mascot of the Queen. Now I am her mascot.

I am a slim, brown mouse with blue eyes.

I’m usually cheerful but when I get angry I am really fearsome.

I like cheese and wheat very much. I don’t like either cats or dogs. The problem is that the Queen has got two dogs and we are always fighting.

When I am in Palace I must always wear my uniform: a red shirt and blue trousers.

I have got lots of friends here and in Spain. My parents came back to Madrid two years ago. When they were here they spoke “Spanglish”. I enjoy living here but I miss my parents and the Iberian ham too.

Once upon a time, there was a mouse called Paco that was working for the Queen of London. The Queen was very rich and she lived in a very big castle with a lot of security. Paco lived comfortably in the Palace with the Queen. He was a secret agent, member of the Royal Security, whose main task was to protect the Queen at all costs. One day, he got up, he put on his uniform and was ready for his job as he always was. Paco went to meet the Queen to inform her of any updates regarding his safety and security. But she wasn’t in her room. She wasn’t anywhere. Paco searched the whole Palace. The Queen was missing. He gave the alarm. One hour later, a note came to Palace. It was a message by the DYSKENS. A criminal organization. They claimed that they had kidnapped the Queen. They were asking for a ransom. They wanted a billion pounds. There was no time to lose. Paco knew what to do. He summoned his old time mates in the secret agency. He formed again the English Day team. He called Herme, an owl specialized in laser beams. Lucy, a pretty clover, she knew all about maps and strategies. Cupy, the cupcake specialized in bombs. The brother and sister Dino and Dina, martial arts champions. Fluffy, he could fly anything, from a helicopter to a spaceship. And the last member of the team was Tiggy, a tiger and a great scientist. The ED Team was back together again. Ready to save the Queen.

By IES group A Illustrators Canigó B

Paco and the ED team went to the Palace of the Queen to look for possible clues. They couldn&#39;t find anything al all. Then they all met in the Palace secret room to hatch a plan. They had to act quickly.

Paco had some ideas and said that they all had to collaborate:

Lucy, the pretty clover would prepare a detailed map of the surroundings. Then Fluffy, who was an expert pilot, would fly his helicopter over the Palace

with the help of Herme and his laser beams to make sure there were no suspicious movements.

In the meanwhile Dino and Dina would train the team for a possible fight. And Tiggy the scientist, would think of a formula to fight the DYSKENS

Cupy the cupcake, had to be ready to prepare a bomb if necessary.

But the first thing they had to do was to contact a member of the DYSKENS in order to negotiate the ransom. Tiggy and Lucy had an idea.....

Lucy and Tiggy thought that it would be a good idea to call Flusky and Disky, two former members of the ED team. Flusky, the panda bear, and Disky, the green cactus, were two tiny secret agents who could enter anywhere. They had helped the group in a lot of missions. Flusky and Disky had been abroad for a year. Lucy remembered how last February Disky invited all the members of the team to go to Scotland to celebrate his birthday but the only one who accepted the invitation was Flusky. Then, they left England and the ED team didn’t see them again. Lucy called Disky first but he didn’t answer the telephone. So, she called Flusky. Lucy told him that the Queen of England had been kidnapped and she said that Paco and all the ED team needed their help. Lucy noticed something strange on Flusky’s voice. He didn’t seem very surprised or concerned. Lucy asked Flusky if something was wrong. Then, Flusky confessed that he

knew who had kidnapped the Queen.

Really? Who? Tell me! – asked the clover It’s …Disky. Oh my gosh !! Disky?? Why ? He wanted to take revenge on you all – Flusky admitted. Revenge? – Lucy was shocked- Is it because we didn’t go to Disky’s birthday party last year?- asked Lucy

No. It’s because he was supposed to be the secret agent of the Queen but Paco took away the job while we were in Scotland. So, Disky is … He is the head of the DYSKENS.

Lucy dropped her telephone and her face was white. Tiggy ran towards Lucy and asked her what happened. But then someone rang at the door. They looked at the door and they saw a letter on the floor. There was a big green “D” on the envelope. Tiggy opened the mysterious letter and he started to read…

CHAPTER 4 Paco and his friends were still surprised, while Tiggy started to read slowly and carefully. -“Wait, wait !! ”-shouted Dino and Dina at the same time.- “ Don&#39;t touch the letter yet !!It can be a trick” -“You&#39;re right,we should check if there is an explosive on it, or perhaps some poison, or a dangerous virus” said Tiggy.”I will revise the envelope and the letter carefully in my lab, don&#39;t worry. Cupy, can you help me?” After some time, Tiggy and Cupy went back to the secret room and told the ED Team that there was nothing wrong with the letter. Paco proceeded to read....... “If you want to see the Queen alive again, you must give us one billion pounds, in 100 pound notes. You must go to the highest floor of the Big Ben tomorrow at eight o&#39;clock in the evening, and carry the money in a black backpack. You cannot call the police. We&#39;ll be watching you all the time. Wait there and we will contact you. Only two of you must come. If you don&#39;t take the money, the Queen will never come back, we will kill her. She has lots of explosives around her ready to be activated in case you don&#39;t follow our instructions”

Dino and Dina, go to the Big Ben and inspect the zone. Fluffy, prepare your helicopter. And take Herme and Tiggy with you. And you, dear Lucy, you will be the person in charge when you arrive at the Big Ben, and you will prepare a strategy to rescue the Queen safe and sound. Lucy, you are now the most important person in this operation. We all trust you. The Queen trusts you.

I will stay in the headquarters to support the operation So, Team, good luck and start work at once” And they all got ready to save the Queen of England. By IES D Illustrators Madre Sacramento school

The ED Team approached the tower. It was all surrounded by DYSKENS minions who were fully loaded and armed. Dino and Dina were rapidly intercepted by ninja DYSKENS robots, who couldn’t move fast but were really strong. Dino and Dina engaged body fight with them. They took one down, and another, and one more but more were coming. They called for back up.

Fluffy conducted the helicopter to the Big Ben, Tiggy and Herme had visual to shoot them. Herme had prepared a laser beam that could destroy the ninjas’ arm ours. Tiggy, as a scientist, had designed drones that could stick on the back of the ninja robots and exploded. Paco from the headquarter was relatively calmed. Everything was going as planned. This attack was just a diversion so the others could infiltrate the tower.

Lucy got in the tower and made it up to the clock room; but she wasn’t alone. She was with Cupy and unknown one, who was wearing a hood. Lucy finally met Flusky and

Disky. They had the Queen cuffed up. The DYSKENS guys asked for the money. “First, the Queen sound and safe”, shouted Lucy.

Flusky put a knife around the Queen’s neck. It was her decision. Lucy threw a bag with all the money. Disky took it and disappeared as Flusky was about to kill the Queen, when out of a shadow the unknown character came out and with just two movements of his cricket bat knocked him down and saved the Queen. That person was Walnut the newest and so far unknown new member of the ED team and he had also become a hero saving the Queen. But this wasn’t the end of the story. Disky couldn’t run away with the money because Cupy was after him the whole time.

By IES B Illustrators Canigó A