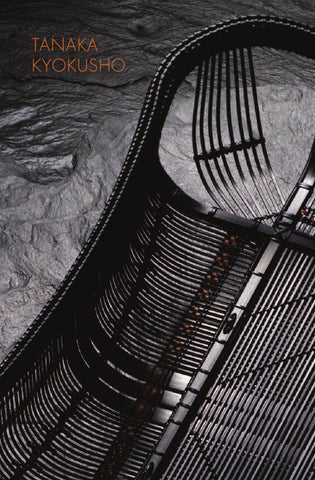 The Tanaka family has owned and run a small bamboo shop in the center of Tokyo for over 100 years.Tanaka Kyokusho studied literature at one of Japan’s top universities but, not long after graduating, felt pulled back to his bamboo heritage. To broaden his training, he spent several years in Beppu, a small city on the island of Kyushu, attending their bamboo craft occupational school. Upon returning to his home in Tokyo, Tanaka felt a need to develop a unique artistic style, one as modern and sophisticated as the capital city itself. The baskets and trays in this exhibition reflect Tanaka’s characteristic style in its full maturity — the exceptional sense of proportion and scale, structural elegance, sophisticated forms, pleasing symmetries, and a rich, burnished satin finish. The contrasting black and orange colors and ornamental rattan stitching provide a sprightly counterpoint to the polished elegance of his forms. One of the most consistent and recognizable elements of Tanaka’s work is the color palette, which is dominated by black and a range of autumnal hues. The artist puts much effort into finding the right ratio between black and the warmer tones used in each artwork. Black creates a clean line and a powerful silhouette but often underplays subtle surface contours. Tanaka’s woven russet and amber passages delineate the sensual curves and twists and draw the eye from point to point through the artwork.Tanaka’s use of color is reminiscent of gold in Japanese lacquerwork, shimmering out from a lustrous dark. Tanaka is one of a very few bamboo artists to use natural dyes formulated from plants and trees. He values this connection to tradition but has yet to find a vegetable dye that can produce a true black. However, he is able to achieve an unusually deep and intense black color in his pieces by double - dying the bamboo with both a redbased black dye and a blue-based one. The perfectionism of his dying process is matched by the planning Tanaka undertakes for each piece. Scale drawings, color testing samples, comparison charts to determine the width of his bamboo strips — all accrue before he begins a new work. Tanaka works in the same studio and shop where his father and grandfather worked and where he first learned to handle and prepare bamboo. He now shares that studio with a promising young student, as well as his wife and son, who make bamboo articles for the shop, allowing Tanaka to devote himself to creating the works of art that have made him one of the most honored bamboo artists of his generation. n ­

ARTIST STATEMENT When I was a boy, I tagged along with my grandfather and my father to harvest bamboo timber in a forest near our house. My job was to collect all of the branches that were clipped after the bamboo stalks were cut down. Bamboo is harvested in the winter from December to February. Throughout my career, I have made different styles of bamboo art. The color black takes precedence in some of my works. I have a friend who builds custom-made cars. He told me once, when he peeked through a telescope to glance over the city of Tokyo from the top floor of the Tokyo Tower, that he spotted a black MercedesBenz. I thought that was an interesting story. The color black doesn&#39;t have a strong identity of its own. It therefore has the effect of bringing out the colors surrounding it. This result is called an after image. Earlier in my career, when my works were selected in the Dento Kogei exhibition for the first time, I used green tea to dye them. At that time, I was interested in extracting the natural characteristics of the works of art. Recently my main concern shifted to having black as the foundation of the artwork using the other colors as accents. These accent colors are derived from plants such as sappan wood, madder, gardenia, turmeric, alder, and safflower. I like to use these pigments because they were passed down to us craftsmen since ancient times. I find that they are very compatible with bamboo so I have been incorporating them in my artworks for many years. I like to express the tension that is much like the wire construction of the Golden Gate Bridge through composition in line construction. I am also interested in the negative space as an important aspect of my composition. I like to use the metaphor of sound that is created by the Japanese guitar called Shamisen. The deep sounds of the Shamisen gradually disappear and create a pause in the music, but this pause, without any sounds, is part of the composition in music. ­ n

I would be very pleased if you feel something soulful when you look at my work. Tanaka Kyokusho, July 2015

The Next Generation, University of Arkansas, Little Rock

Awarded the “Purple Ribbon” by the Japanese Congress for lifetime achievement in the arts, presented by the Emperor of Japan

Lecture and demonstration at the Asian Art Museum of San Francisco

Tanaka’s new body of work reflects his characteristic elegance and his unique palette of lustrous black and warm gold. His work gracefully synthesizes sleek modern aesthetics with meticulous traditional craftsmanship. One of the most well respected creators of bamboo art alive today, Tanaka has received a multitude of awards and accolades. In 2008, he was awarded the Purple Ribbon for Lifetime Achievement in the Arts by the Japanese Congress, presented by the Emperor of Japan. 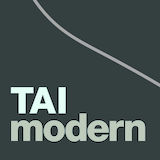