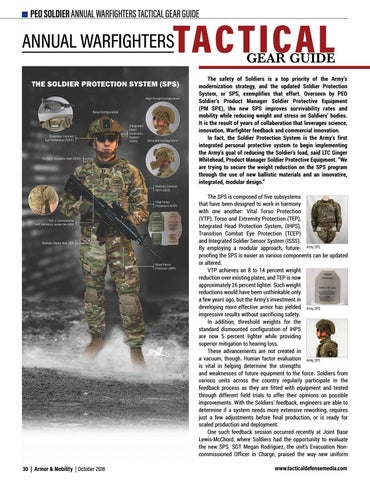 The safety of Soldiers is a top priority of the Army’s modernization strategy, and the updated Soldier Protection System, or SPS, exemplifies that effort. Overseen by PEO Soldier’s Product Manager Soldier Protective Equipment (PM SPE), the new SPS improves survivability rates and mobility while reducing weight and stress on Soldiers’ bodies. It is the result of years of collaboration that leverages science, innovation, Warfighter feedback and commercial innovation. In fact, the Soldier Protection System is the Army’s first integrated personal protective system to begin implementing the Army’s goal of reducing the Soldier’s load, said LTC Ginger Whitehead, Product Manager Soldier Protective Equipment. “We are trying to secure the weight reduction on the SPS program through the use of new ballistic materials and an innovative, integrated, modular design.” The SPS is composed of five subsystems that have been designed to work in harmony with one another: Vital Torso Protection (VTP), Torso and Extremity Protection (TEP), Integrated Head Protection System, (IHPS), Transition Combat Eye Protection (TCEP) and Integrated Soldier Sensor System (ISSS). By employing a modular approach, future- Army SPS proofing the SPS is easier as various components can be updated or altered. VTP achieves an 8 to 14 percent weight reduction over existing plates, and TEP is now approximately 26 percent lighter. Such weight reductions would have been unthinkable only a few years ago, but the Army’s investment in developing more effective armor has yielded Army SPS impressive results without sacrificing safety. In addition, threshold weights for the standard dismounted configuration of IHPS are now 5 percent lighter while providing superior mitigation to hearing loss. These advancements are not created in a vacuum, though. Human factor evaluation Army SPS is vital in helping determine the strengths and weaknesses of future equipment to the force. Soldiers from various units across the country regularly participate in the feedback process as they are fitted with equipment and tested through different field trials to offer their opinions on possible improvements. With the Soldiers’ feedback, engineers are able to determine if a system needs more extensive reworking, requires just a few adjustments before final production, or is ready for scaled production and deployment. One such feedback session occurred recently at Joint Base Lewis-McChord, where Soldiers had the opportunity to evaluate the new SPS. SGT Megan Rodriguez, the unit’s Evacuation Noncommissioned Officer in Charge, praised the way new uniform

The SHOT Show connects the armed forces with hundreds of manufacturers capable of adapting their products and accessories to meet the unique requirements of your tactical teams. It’s your best source to see the latest innovations and applications in firearms, protective equipment and tactical gear. Registration opens this fall.

SHOTSHOW.ORG/AM The SHOT Show is a trade-only event. Armed forces personnel with purchasing influence are welcome. AN OFFICIAL EVENT OF:

PEO SOLDIER ANNUAL WARFIGHTERS TACTICAL GEAR GUIDE components can be scaled up or down depending on the mission. “Soldiers appreciate when a uniform fits them, is comfortable and doesn’t drag them down,” she said. “When a uniform doesn’t fit, Soldiers start to remove their gear because it’s not comfortable or it gets in the way, and then they don’t have any protection, so having equipment that you can utilize based on your job and mission helps out significantly.” Army SPS SSG John Perez, Non-commissioned Officer in Charge of one of the platoons, also explained how the new equipment is better for Soldiers. “The new system increases training efficiency because it is lighter, which allows us to move quicker, therefore increasing mobility compared to the previous system, IOTV [Improved Outer Tactical Vest], which was more constricting. It also has different tiers that you are able to scale to, which helps a leader decide what level protection is needed based on the mission, so for a driver he can scale down to a lower protection because he’s driving, but a Soldier on foot patrol would need the full protection system for added protection,” he said.

Fitting the Whole Force Weight is not the only consideration when designing the new SPS. The Army has listened to Soldier feedback and designed components that are specific to male and female body types, a move lauded by female Soldiers. SPC Robin Sarkisian, a logistics specialist, used the opportunity to offer her insights on the importance of female soldiers having equipment that fits them. “Speaking for the majority of female Soldiers, having equipment that fits is huge because we have other things going on, so we need to ensure that we are moving just as quickly as the males. As females we are built differently than males, so we need certain things to fit correctly because if we don’t, that’s going to contribute to more problems that we are already struggling to get through,” Sarkisian stated. “So to have gear that fits is going to make that much of a difference for females in the future to get to where males are in the Army now and on the battlefield. The old system was not as good because it was very heavy, especially on your head and neck, so you tend to wear out faster, get tired faster and your skills are tarnished,” she said. Back at PM SPE, LTC Whitehead elaborated further on innovations related to women. She noted that aside from being heavier and bulkier, previous versions of the SPS used helmets that had an X-formation retention strap mechanism, but this proved to be uncomfortable for female Soldiers with their hair in a bun. The new SPS has an H-back strap that fits around the bun, increasing comfort. With an overall 10 percent weight reduction, improved mobility, better technology and considerations for the physical differences between genders, the new SPS provides the Soldier with multiple levels of ballistic protection tailorable to a broad range of missions. This modular, scalable approach increases Soldier survivability and mobility and contributes to increased force protection, bringing Soldiers home after ensuring victory abroad. n

The U.S. Military Special Forces ... And the Boy Scouts of America Have Found What Works in Treating Poison Ivy “Our military is tough, but we don’t let them suffer. We use Zanfel because we want them back in two minutes, not two weeks.” — General William Duffy, RET.

Zanfel washes away the itch, so healing can begin IMMEDIATELY!

It Works! Available at pharmacies everywhere. Also at AAFES, MCX and NEXCOM.

GEAR FOR THE MARINE RIFLEMAN

“Every Marine a Rifleman.” That has been the proud motto of the U.S. Marine Corps for a long time, but it takes more than words to be Marine riflemen. Equipment that boosts survivability and lethality is vital to meet the challenges that confront them on the battlefield. Accordingly, this year’s Gear Guide takes a look at some of the Marine Corps’ efforts to modernize gear and boost lethality for Marines right in the field, where it matters most. Whether it is increased weapon lethality, such as that of the MK13 Mod 7 Long Range Sniper Rifle; enhanced body armor protection with lighter weight, such as the benefits of the Plate Carrier Generation III; or advances in nonlethal deterrence such as the “Dazzling Laser” Ocular Interruption System, the Corps’ purpose is unmistakable: Give the USMC riflemen what they need, where they need it.

Plate Carrier Generation III Part of the Marine Corps’ Ballistic Protection Systems, the Plate Carrier Generation III (PC Gen III) will be an update of the current PC fielded in 2011. Featuring a weight reduction of about 25 percent, reduced Prototype of the Plate bulk, a removable Carrier Generation III soft armor vest, and an (U.S. Marine Corps photo) integrated load bearing panel, the PC Gen III will increase Marine lethality while improving mobility and will provide the same form, function, and soft armor coverage as the legacy plate carrier. The PC Gen III will feature new sizes — including small short and x-small short — that can accommodate Marines of smaller stature.

meters. Since the SRF is mounted on a rifle, a Marine can use it without having to let go of the weapon, and its Infra-Red (IR) aiming laser and IR illuminator capabilities enable Marines to illuminate or point to targets during both day and night.

A lightweight, air-cooled, and gas-operated weapon designated for squad marksman use, the M38 Squad Designated Marksman Rifle (SDMR) is magazine-fed, shoulder-fired, and equipped with an improved optic that enables precise, lethal fire up to 600 meters. Essentially an M27 Infantry Automatic Rifle with a scope, the M38 fires 5.56mm rounds — the same as the M16A4 rifle. The Marine Corps is supplying one SDMR to a marksman in each of its infantry squads.

The STS will be a lightweight, monocular thermal imager that can be handheld or attached to a weapon (M16A4 rifle or M4 carbine). When used in conjunction with the AN/PVQ-31 Rifle Combat Optic (RCO), it will enable recognition of man-sized targets at a distance of at least 300 meters and possibly as far as 700 meters under atmospheric conditions providing 4.35 miles of visibility.

The first new sniper rifle for Marines since the Vietnam War and the replacement for the M40, the bolt-action MK13 Mod 7 Long Range Sniper Rifle is chambered for the .300 Winchester Magnum caliber and provides accurate, precise sniper fire to a distance of 1,250 meters. Features include an enhanced day optic, adjustable buttstock, and bipod. The MK13 Mod 7 is the primary sniper rifle for the Marine Corps Special Operations Command and will also be the primary sniper rifle for Marine scout sniper and reconnaissance platoons.

Being able to quickly determine the distance of targets can boost lethality, especially when calling in artillery and air strikes. The SRF helps snipers and squad leaders with its ability to detect targets at a distance up to 1,500

Also known as a “Dazzling Laser,” the OI is a nonlethal hailing and warning device intended to stop the advance of personnel who are potential threats. Featuring an eye-safe laser, it produces visual obstruction of targets by means of a glare effect that can be intensified if the need arises. The system provides various benefits, including increased safety for non-enemy personnel, reduced need for lethal force, and deterrence against unauthorized vehicles and personnel. It can be used as a handheld device or mounted on weapon systems equipped with a Military Standard-1913 rail attachment bracket.

The safety of Soldiers is a top priority of the Army’s modernization strategy, and the updated Soldier Protection System, or SPS, exemplifies that effort. Overseen by PEO Soldier’s Product Manager Soldier Protective Equipment (PM SPE), the new SPS improves survivability rates and mobility while reducing weight and stress on Soldiers’ bodies. It is the result of years of collaboration that leverages science, innovation, Warfighter feedback and commercial innovation. 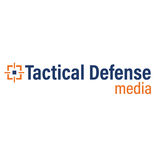