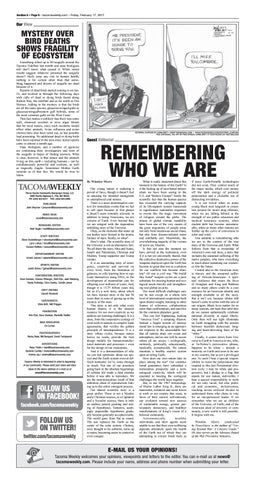 Something killed up to 80 seagulls around the Tacoma Tideflats last month and state biologists still donâ&amp;#x20AC;&amp;#x2122;t know what caused it. While initial results suggest whatever poisoned the seagulls doesnâ&amp;#x20AC;&amp;#x2122;t likely pose any risk to human health, nothing is for certain other than that something happened and dozens of seagulls are dead because of it. Reports of dead birds started coming in on Jan. 23, and trickled in through the following days with calls of dead or dying birds found along Ruston Way, the tideflats and as far north as Des Moines. Adding to the mystery is that the birds are all the same species, glaucous-winged gulls or glaucous-winged/western gull hybrids, some of the most common gulls on the West Coast. That fact makes it unlikely that there was some spill, chemical accident or toxic algae bloom that hit local waters, since such incidents would affect other animals. Avian influenza and avian cholera have also been ruled out, as has possible lead poisoning. No additional dead or dying birds have been reported in the area since initial reports came in almost a month ago. State biologists, and a number of agencies are continuing their investigation and tests of the seagulls in hopes of finding answers. What is clear, however, is that nature and the animals living on this earth â&amp;#x20AC;&amp;#x201C; including humans â&amp;#x20AC;&amp;#x201C; can be simultaneously powerful and resilient, as well as tragically fragile. Sometimes Mother Earth reminds us of that fact. We would be wise to listen.

REMEMBERING WHO WE ARE

Our young nation is enduring a period of farce, though it doesnâ&amp;#x20AC;&amp;#x2122;t feel so amusing for stranded immigrants or unemployed coal miners. There is a more determinative context for immediate events that we fail to call upon because at first glance it doesnâ&amp;#x20AC;&amp;#x2122;t seem remotely relevant: in addition to being Americans, we are citizens of Earth. Even beyond that, we are integral with the stupendous unfolding story of the Universe. Okay, so the elements that make up our bodies were formed in the atomic furnace of stars. Really, so what? Hereâ&amp;#x20AC;&amp;#x2122;s what. The scientific story of the Universe is not an alternative fact. We all share the story, Shia and Sunni, Israeli and Palestinian, Christian and Muslim, Trump supporter and Trump resister. It is an astounding story of emergence, creativity and survival on every level, from the formation of galaxies, to cells learning how to replicate themselves using DNA, to the development of mammalian care for offspring over millions of years. And, though it is 13.75 billion years old, for us itâ&amp;#x20AC;&amp;#x2122;s a new story, about which we have learned more in the last 50 years than in eons of gazing up at the mystery of the stars. This story is not only what every human shares; it is the deepest resource for our own creativity as we address our looming challenges. It is a story, from the cooperative ecology of coral reefs to nations in complex trade agreements, that verifies the golden principle of interdependence. It is a story whose cycles, because nature leaves no waste, provide the best design models for human-manufactured materials and processes â&amp;#x20AC;&amp;#x201C; even for the design of our institutions. And it is a demonstration of why we can feel optimistic about our species and the Earth system even at difficult moments: weâ&amp;#x20AC;&amp;#x2122;ve come through so much. Not one of our ancestors going back to the absolute beginnings of cellular life made a fatal mistake before it was able to reproduce. We are the near-miraculous result of that unbroken chain of reproduction linking us to the entire emergent process. Our shared scientific story is a great unifier. There is not a Muslim and a Christian science, or a Capitalist and a Socialist science; there is only an endless patient positing and testing of hypotheses. Tentative, seemingly impossible hypotheses gradually become generally accepted truths. The world goes from flat to round. The sun replaces the Earth as the center of the solar system. Cholera, once thought to be airborne, turns up in water, becoming easier to control or even conquer.

What is really important about this moment in the history of the Earth? Is it the boiling up of race-based nationalism we have been seeing in the U.S. and Western Europe? Surely the scientific fact that the human species has exceeded the carrying capacity of its life-support system transcends in significance nationalist responses to events like the tragic movement of refugees around the globe. The strains of global climate instability have been one of the very causes of the great migrations of people away not only from murderous social chaos, but also from disease-infested water and untillable soil. Meanwhile, the overwhelming majority of the victims of terror are Muslim. Is this not also the moment we have arrived at the realization, even if it is not yet universally shared, that the collective destructive power of the weapons deployed upon the Earth has become so great that war as a solution for our conflicts has become obsolete? All war is civil war. â&amp;#x20AC;&amp;#x153;We build/ they buildâ&amp;#x20AC;? weapon cycles are a poor substitute for meeting human and ecological needs directly and strengthening real global security. Our most difficult challenges cannot be met except on a whole new level of international cooperation built upon shared insight, listening to other frames of reference, collaboration more than confrontation, and sacrifice for the common planetary good. This can feel frightening, making â&amp;#x20AC;&amp;#x153;America Firstâ&amp;#x20AC;? a tempting illusion. Instead a fragile system of international law is emerging as an appropriate response to the unavoidable fact that all nations share one ocean and atmosphere, and no one will be secure unless all are secure â&amp;#x20AC;&amp;#x201C; ecologically, militarily, politically, educationally, medically, economically. We cannot maintain a healthy market system upon an ailing Earth. How does our own nation take its place among the rest? Our constitutional guarantees have unleashed a tremendous prosperity and a technological creativity, which will be essential to meeting the ecological challenges the world faces together. But, to use the 1967 terminology of Martin Luther King Jr., there are materialist, militarist and racist forces at work in our country that resist, in favor of their narrow self-interests, our evolution toward new sources of sustainable energy, greater participatory democracy, and healthier manifestations of Kingâ&amp;#x20AC;&amp;#x2122;s vision of a beloved community. Astronomically wealthy individuals and their agents seem unable to see that their own wellbeing depends ultimately upon the health of the Earth out of which they are attempting to extract fossil fuels as

if more Earth-friendly technologies did not exist. They control much of the major media, which coin money off the dark energy of political polarization and a clickable sea of distracting trivialities. It is not trivial when so many young black men languish in corporate prisons for minor drug offenses, when we are falling behind in the strength of our public education and medical insurance systems, when student debt has become unsustainable, when so many other nations are further up the curve of conversion to solar and wind. One antidote is remembering who we are in the context of the true story of the Universe and Earth. What follows from that is ownership of Americaâ&amp;#x20AC;&amp;#x2122;s own real story, a story that includes the unearned suffering of the native peoples, who have everything to teach about sustaining our resources into the future. Central also to the American story is slavery and the unearned suffering of African-Americans. A spiritual resilience that wears the faces of Douglass and King and Baldwin and so many others could be a core resource for an American identity and strength available to all the races. But it isnâ&amp;#x20AC;&amp;#x2122;t yet, because whites still havenâ&amp;#x20AC;&amp;#x2122;t come to terms with the sins of our origins. Black lives matter for so many reasons, not least that until they do we cannot authentically celebrate national diversity in equal liberty. Only then will our light illuminate an Earth struggling with the tension between heartfelt democratic longing and heart-shriveling fears of the â&amp;#x20AC;&amp;#x153;other.â&amp;#x20AC;? Finally, it comes down from Universe to Earth to America to me, who, in Ta-Nehisiâ&amp;#x20AC;&amp;#x2122;s provocative phrase, happens to be white â&amp;#x20AC;&amp;#x201C; already a minority on Earth and soon to be one in my country, but as yet a privileged one. As such I bear a special responsibility to resist the polarization that erupted in this last Presidential election cycle. I may be white and progressive, but I pledge to a flag that stands for one nation, indivisible. I bear a special responsibility to work for not only racial, but also political and economic, inclusiveness, reaching across artificial divides to understand those who chose to vote for an inexperienced leader. If we remember who we are as children of the Universe, of Earth, and of the American ideal of diversity in community, a new world is still possible. It begins with me. Winslow Myers, syndicated by PeaceVoice, is the author of â&amp;#x20AC;&amp;#x153;Living Beyond War: A Citizenâ&amp;#x20AC;&amp;#x2122;s Guide.â&amp;#x20AC;? He also serves on the Advisory Board of the War Preventive Initiative.

E-MAIL US YOUR OPINIONS! Tacoma Weekly welcomes your opinions, viewpoints and letters to the editor. You can e-mail us at news@ tacomaweekly.com. Please include your name, address and phone number when submitting your letter. 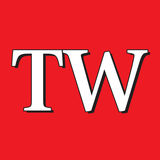