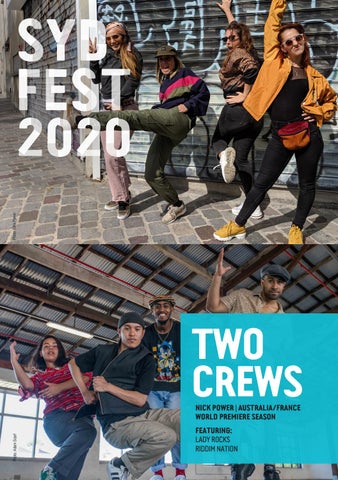 ABOUT THE SHOW Being in a crew is the cornerstone of hip hop culture. It means you belong. You will build skills together, rock shows, battle rivals and turn the party out. Creativity fuelled by fun, friendship, community and competition. No overarching bureaucracy, administrators or managers. A pure dance entity. Each crew has its own story and reason for being. This show is about two crews – Riddim Nation & Lady Rocks.

Nick Power is a Sydney based b*boy and choreographer whose work draws on the rituals and culture of hip hop to create contemporary performances. His practice spans from remote Aboriginal communities to the most prestigious European contemporary dance festivals. Two Crews represents Power’s third independent dance work, following on from the highly acclaimed Cypher and Between Tiny Cities. In 2018 Powers was the recipient of the Sidney Myer Creative Fellowship.

Thanks also to University of New South Wales – Creative Practice Lab, Shoalhaven Entertainment Centre, and Legs on the Wall.

This assisted project has by been by the Australian Government’s This project has been theassisted Australian Government’s Major FestiMajor Festivals by the Council,and advisory vals Initiative, managed by the Initiative, Australiamanaged Council, its Australia arts funding its arts funding and advisory body, in association with the body, in associationConfederation with the Confederation of Australian International Arts of Australian International Arts Festivals Inc., Festivals Inc., commissioned Festival, Adelaide and commissionedby by Sydney Sydney Festival, Adelaide FestivalFestival, and Brisbane Festival. Brisbane Festival.

Department of Communications and the Arts

The show program for Two Crews at Sydney Festival 2020.

The show program for Two Crews at Sydney Festival 2020.