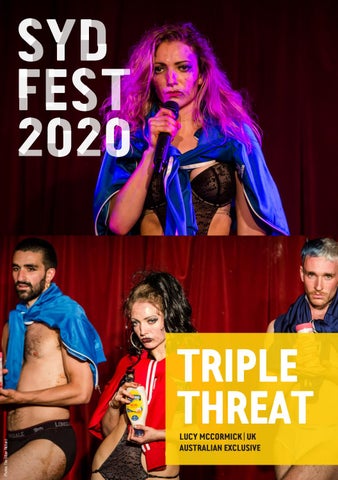 Photos: The Other Richard

Post-popular prodigy Lucy McCormick and her ‘Girl Squad’ present a “trashstep-dubpunk” morality play for the modern world. Casting herself in all the main roles, McCormick attempts to reconnect to her own moral conscience by re-enacting the New Testament via a Nu-wave holy trinity of dance, power ballads and performance art. With trademark absurdism and enthusiasm, McCormick puts her best foot forward in the face of existential deadlock.

Photos: The Other Richard

Triple Threat was co-commissioned by hAb & Contact for Works Ahead, with support from Cambridge Junction, Marlborough Theatre & Soho Theatre with funding from Arts Council England.

The show program for Triple Threat at Sydney Festival 2020.

The show program for Triple Threat at Sydney Festival 2020.