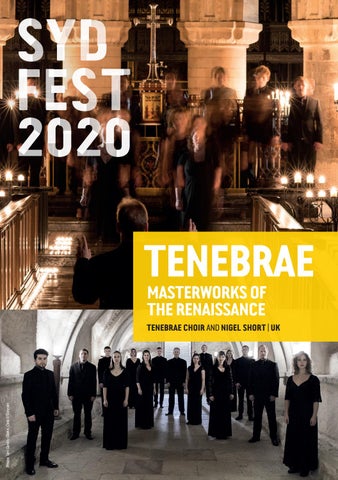 TENEBRAE MASTERWORKS OF THE RENAISSANCE

PROGRAMME: MASTERWORKS OF THE RENAISSANCE

British choir Tenebrae is renowned for its interpretations of choral repertoire from the Renaissance to the present day, and for its core values of passion and precision. Under the direction of Nigel Short (a former King’s Singer), Tenebrae has twice secured the award for Best Choral Performance in the BBC Music Magazine Awards, and in 2018 it received its first Grammy nomination. Alongside a busy international schedule, Tenebrae runs a thriving outreach programme in its home city of London. NIGEL SHORT Award-winning conductor Nigel Short has earned widespread acclaim for his recording and live performance work with leading orchestras and ensembles across the world. A former member of renowned vocal ensemble The King’s Singers (1994–2000), in 2001 Nigel formed Tenebrae, a virtuosic choir that combines the passion of a cathedral choir with the precision of a chamber ensemble. Under his direction, Tenebrae has collaborated with internationally acclaimed orchestras and instrumentalists and now enjoys a reputation as one of the world’s finest vocal ensembles. To date, Nigel has conducted the Academy of Ancient Music, Aurora Orchestra, BBC Symphony Orchestra, Chamber Orchestra of Europe, English Chamber Orchestra, English Concert, London Philharmonic Orchestra, London Symphony Orchestra, Orchestra of the Age of Enlightenment, Royal Philharmonic Orchestra, Scottish Ensemble and Britten Sinfonia.

The show program for Tenebrae - Masterworks of the Renaissance at Sydney Festival 2020.

The show program for Tenebrae - Masterworks of the Renaissance at Sydney Festival 2020.