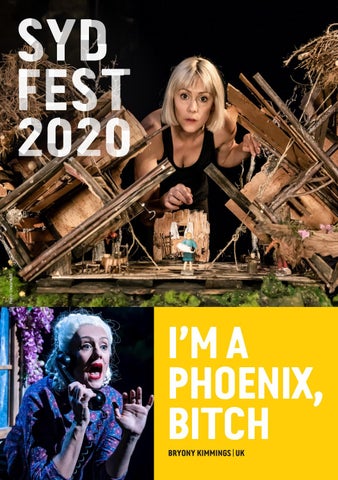 Following an extended run at Battersea Arts Centre, a sell-out run at the 2019 Edinburgh Festival Fringe and an Offies 2019 Award win, Bryony Kimmings brings the critically acclaimed I’m a Phoenix, Bitch to Sydney Opera House. Kimmings weaves a powerful, dark and joyful masterpiece about motherhood, heartbreak and finding inner strength. I’m a Phoenix, Bitch combines ethereal music, personal stories, epic film and feats of human strength. Ever sunk so deep you felt like you might never make it up for air? In 2016, Bryony nearly drowned. Postnatal breakdowns, an imploding relationship and an extremely sick child left her sitting beneath the waves hoping she could slowly turn to shell.   Four years later and she is able to deal with life again, but wears the scars of that year like a dark and heavy cloak. Who do we become after trauma? How do we turn pain into power? How do we fly instead of drown? We will need new myths to survive the end of existence as we know it. Tonight a new legend will be created; that of the invincible and fearless woman; a tale Bryony wishes she had known from birth.

Inspired by the taboos, stigmas, anomalies and social injustices around her, Kimmings creates mind-blowing, multi-platform art works to provoke change.

The work centres around outlandish ‘social experiments’ that Kimmings conducts with genuine genius, intrigue and wholehearted fearless gusto. The artist sets her sights on the impossible and unconquerable, and turns the unspeakable into the year’s hottest topic. THANKS

The show program for I'm a Phoenix, Bitch at Sydney Festival 2020.

The show program for I'm a Phoenix, Bitch at Sydney Festival 2020.