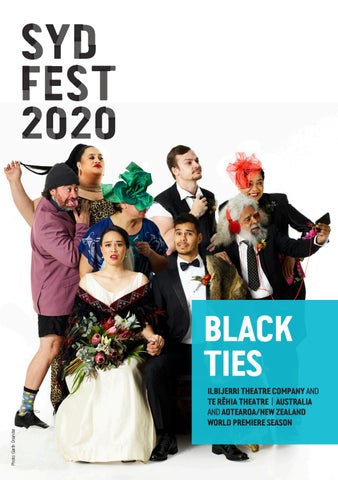 For Maori corporate hotshot Hera and Aboriginal consultancy entrepreneur Kane, it was love at first sight. Ambitious and career focused, Kane and Hera have their perfect future all mapped out. But there is one thing they can’t control… their families!

Two families, two cultures... too much!

As the biggest mob get worked up for the blackest wedding ever, reality is sinking in. Fast! Will this international love story bring two strong cultures together? Or will it blow Hera and Kane’s world apart? ILBIJERRI THEATRE COMPANY

BLACK TIES was commissioned by AsiaTOPA, a joint initiative of the Sidney Myer Fund and Arts Centre Melbourne; and has been assisted by the Australian Governmentâ&#x20AC;&#x2122;s Major Festivals Initiative, managed by the Australia Council, its arts funding and advisory body, in association with the Confederation of Australian International Arts Festivals Inc., Sydney Festival, Perth Festival, New Zealand Festival of the Arts, Auckland Arts Festival, AsiaTOPA Festival and Brisbane Festival. BLACK TIES is also supported by Creative New Zealand and The Wilin Centre for Indigenous Arts & Cultural Development. ILBIJERRI Theatre Company is assisted by the Australian Government through the Australia Council, its arts funding and advisory body, and by Creative Victoria and City of Melbourne.

ILBIJERRI Theatre Company and Te Re-hia Theatre Company acknowledge and pay respect to the Country that we travel through and share stories on. We acknowledge and pay our respects to the Traditional Owners, Elders, Ancestors, and young leaders. We acknowledge, with full respect, the strength of First Nations people and communities, continuing to practice culture, and connection to Country. We acknowledge, with full respect, the power and excellence of First Nations people and communities fighting to protect and look after Country, Community, Language and Lore, in the face of ongoing colonial interruptions and cultural genocide. Always was, always will be, sacred Indigenous land.

“NOTHING SHORT OF STUPENDOUS” COURIER MAIL

The show program for BLACK TIES at Sydney Festival 2020.

The show program for BLACK TIES at Sydney Festival 2020.