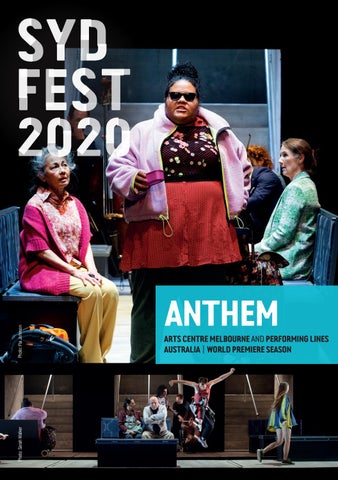 WRITERS’ NOTE We first came together in 1998 to create a work to mark the ten-year anniversary of Melbourne Workers Theatre. The company was not expected to last beyond its first project at the Jolimont Train Maintenance Yards, so there was truly something to celebrate. Who’s Afraid of the Working Class? told the story of a group of characters whose lives were impacted upon by the rise of economic rationalism. It caught the zeitgeist and articulated the shared anxieties of the end of the 20th century. Twenty years later we have come together again to try and capture the mood of our times. As in the earlier work we sat around the table and thrashed out our ideas. We argued and yelled and laughed and when we got sick of the sound of our own voices we ventured out into the city. It was winter in Melbourne. It was bleak. The world seemed tough. We caught trains out to the end of the lines and into the city again and brought the stories of what we’d seen back into the room. Slowly, we began to build a picture of a city, a place, a country, a time of fractured identities, racial tensions and economic hardship. Our play is set largely in the public domain, particularly on trains where our conflicting identities around class and race and gender and sexuality clash and compete for ascendency, or simply for space and the right to be seen. What became apparent is that we are not one nation brought together by a single anthem. Our country is not “fair” in any meaning of the word as our Anthem proclaims. We are riven by difference and disagreement and the arguments around our national identity are acrimonious and dangerous. Our political leadership has failed to provide a vision that could unify us and instead, seems only to entrench our differences. The nation’s a powder keg waiting to blow. “The Fire Next Time,” says a character in the play quoting James Baldwin. As in the earlier work, class remains our shared and urgent theme. In Uncensored Andrew creates a chorus of commuters caught on the endless cycle of having to make ends meet. In 7-11, A Chemist Warehouse… A Love Story, Melissa tells the story of two low paid workers who set out on a Bonnie and Clyde-like mission to take on capitalism. In Terror, Patricia tells the story of three women who face increasing economic uncertainty. Here, it is not only class that places these women in jeopardy but their gender. In Brothers and Sisters, Christos tells the story of a successful man returning to Australia from Europe, hoping to transform the lives of his three siblings who never escaped their tough upbringing. As in the earlier play, the individual stories are interwoven and held together by Irine’s score, Resistance. She also riffs on some of Christos’s characters, including an elderly Greek

woman on the train, reminding us that political struggle has a history and that those histories are a part of our ongoing national narrative.

We’d like to thank Daniel Clarke for bringing us back together. We all said it probably couldn’t be done. He didn’t listen and just made sure that it did. And we’d like to thank Bryan Andy who has joined us as a sixth voice as dramaturg and consultant. He has provided a wise and encouraging presence throughout the process. – Andrew Bovell, Patricia Cornelius, Melissa Reeves, Christos Tsiolkas and Irine Vela.

In Who’s Afraid… we softened the blow of its tough stories by finding moments of connection and intimacy between strangers, which reminded us of our shared humanity. Anthem is a tougher work. There are no moments of redemption or reassurance. It is unrelenting in the conclusions it draws. But it is a true account of what we found the state of things to be.

PERFORMING LINES Performing Lines produces provocative contemporary performance by Australia’s most audacious independent artists. We curate a portfolio of work that is propelled by pressing questions and new ways of seeing the world. We champion the unconventional, the marginal, the rebellious and the new. Executive Producer Marion Potts General Manager Megan Roberts performinglines.org.au This project has been assisted by the Australian Government’s Major Festivals Initiative, managed by the Australia Council, its arts funding and advisory body, in association with the Confederation of Australian International Arts Festivals Inc., commissioned by Melbourne International Arts Festival, Arts Centre Melbourne, Sydney Festival and Perth Festival.

The show program for Anthem at Sydney Festival 2020.

The show program for Anthem at Sydney Festival 2020.