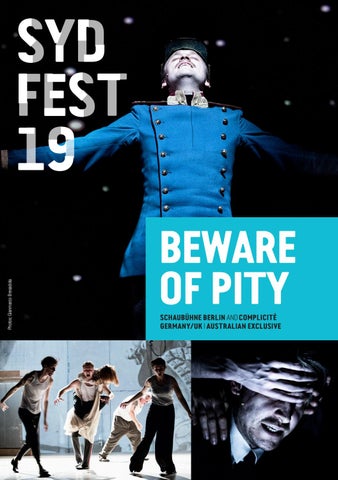 Hofmiller, a young soldier, is invited to Baron Kekesfalva’s castle for a soirée. The evening is a great success, and Hofmiller entertains with one amusing anecdote after another.

Led by Artistic Director Thomas Ostermeier since 1999, Schaubühne premieres at least 10 shows per season, alongside a repertoire of over 30 existing productions and showcases at international theatre festivals.

Drunk on his success, he asks the host’s daughter, Edith, for a dance – but Edith turns pale. Hofmiller realises he’s committed a faux pas, and when the girl’s cousin explains that Edith is paralysed, he flees the castle in embarrassment. The next morning, Hofmiller sends flowers to apologise, and Edith sends back an invitation to tea. Soon, Hofmiller is a daily guest at the castle, and Edith begins to fall desperately in love with him. When Hofmiller realises, he proposes marriage out of pity; but once Edith understands what has happened, her initial delight turns into a despairing rage… Beware of Pity deals with the question of compassion, and how difficult it is to sincerely suffer vicariously with another. This stage version, by German ensemble Schaubühne Berlin, is directed by Simon McBurney – actor, director, and co-founder of legendary British theatre company Complicité. It marks the first time that McBurney has worked with a German theatre ensemble.

Schaubühne is an ensemble theatre where the actors, dramatic characters and situations of a play take centre stage. One of the theatre’s distinctive features is a stylistic variety in approaches to directing, which includes new forms of dance and musical theatre, and working with notable directors from outside Germany. Another unifying element is its search for a contemporary and experimental theatre language that focuses on storytelling and a precise understanding of texts both classical and contemporary. Schaubühne’s repertoire encompasses the great dramatic works of world literature alongside contemporary plays by internationally renowned writers.

As co-founder of renowned theatre company Complicité, Simon McBurney has created and acted in more than 30 productions, and the company has won over 50 major theatre awards worldwide. His directing work for Complicité includes: The Encounter (2015; Sydney Festival 2017); The Master and Margarita (2012); Shun-kin (2008); A Disappearing Number (2007) and many more. Other directing credits include: The Kid Stays in the Picture (2017), All My Sons on Broadway (2008) and The Resistible Rise of Arturo Ui with Al Pacino in New York (2002). Opera directing credits include The Rake’s Progress (2017) produced by Dutch National Opera and Festival d’Aix-en-Provence, The Magic Flute (2012) and A Dog’s Heart (2010) both produced by Dutch National Opera and English National Opera in collaboration with Complicité. McBurney has also acted in numerous feature films including: Allied (2016); The Conjuring 2 (2016); Mission: Impossible - Rogue Nation (2015); The Theory of Everything (2014), Tinker Tailor Soldier Spy (2011); Jane Eyre (2011); The Duchess (2008); and The Last King of Scotland (2006). COMPLICITÉ

Founded in 1983, London-based Complicité has toured the world, becoming known as one of the UK’s most exciting and enduring theatre companies. The company continues to experiment, breaking new ground with every new show.

The company was last seen in Sydney with its critically acclaimed seasons of A Pacifist’s Guide to the War on Cancer (2018), The Encounter (Sydney Festival 2017), The Three Lives of Lucie Cabrol (1995), The Street of Crocodiles (1993) and The Winter’s Tale (1992).

“AS VISUALLY STUNNING AS IT IS DEEPLY MOVING” THE AUSTRALIAN

MAN WITH THE IRON NECK

ALSO AT A GLITTERING, RAUCOUS NIGHT ON THE TOWN

Show program for Beware of Pity at Sydney Festival 2019

Show program for Beware of Pity at Sydney Festival 2019