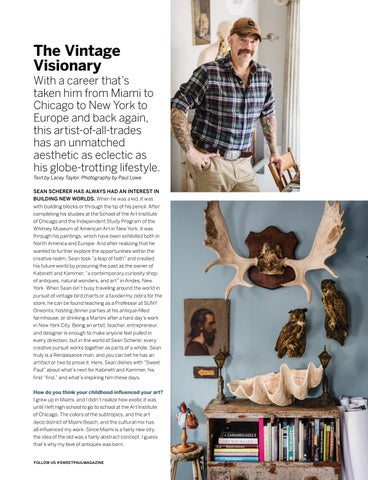 The Vintage Visionary With a career that’s taken him from Miami to Chicago to New York to Europe and back again, this artist-of-all-trades has an unmatched aesthetic as eclectic as his globe-trotting lifestyle. Text by Lacey Taylor. Photography by Paul Lowe SEAN SCHERER HAS ALWAYS HAD AN INTEREST IN BUILDING NEW WORLDS. When he was a kid, it was with building blocks or through the tip of his pencil. After completing his studies at the School of the Art Institute of Chicago and the Independent Study Program of the Whitney Museum of American Art in New York, it was through his paintings, which have been exhibited both in North America and Europe. And after realizing that he wanted to further explore the opportunities within the creative realm, Sean took “a leap of faith” and created his future world by procuring the past as the owner of Kabinett and Kammer, “a contemporary curiosity shop of antiques, natural wonders, and art” in Andes, New York. When Sean isn’t busy traveling around the world in pursuit of vintage bird charts or a taxidermy zebra for the store, he can be found teaching as a Professor at SUNY Oneonta, hosting dinner parties at his antique-filled farmhouse, or drinking a Martini after a hard day’s work in New York City. Being an artist, teacher, entrepreneur, and designer is enough to make anyone feel pulled in every direction, but in the world of Sean Scherer, every creative pursuit works together as parts of a whole. Sean truly is a Renaissance man, and you can bet he has an artifact or two to prove it. Here, Sean dishes with “Sweet Paul” about what’s next for Kabinett and Kammer, his first “find,” and what’s inspiring him these days. How do you think your childhood influenced your art? I grew up in Miami, and I didn’t realize how exotic it was until I left high school to go to school at the Art Institute of Chicago. The colors of the subtropics, and the art deco district of Miami Beach, and the cultural mix has all influenced my work. Since Miami is a fairly new city, the idea of the old was a fairly abstract concept. I guess that’s why my love of antiques was born. 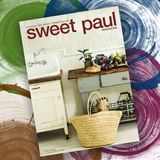