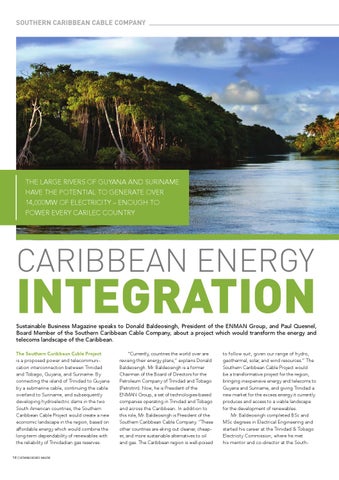 THE LARGE RIVERS OF GUYANA AND SURINAME HAVE THE POTENTIAL TO GENERATE OVER 14,000MW OF ELECTRICITY – ENOUGH TO POWER EVERY CARILEC COUNTRY.

Sustainable Business Magazine speaks to Donald Baldeosingh, President of the ENMAN Group, and Paul Quesnel, Board Member of the Southern Caribbean Cable Company, about a project which would transform the energy and telecoms landscape of the Caribbean. The Southern Caribbean Cable Project is a proposed power and telecommunication interconnection between Trinidad and Tobago, Guyana, and Suriname. By connecting the island of Trinidad to Guyana by a submarine cable, continuing the cable overland to Suriname, and subsequently developing hydroelectric dams in the two South American countries, the Southern Caribbean Cable Project would create a new economic landscape in the region, based on affordable energy which would combine the long-term dependability of renewables with the reliability of Trinidadian gas reserves.

“Currently, countries the world over are revising their energy plans,” explains Donald Baldeosingh. Mr. Baldeosingh is a former Chairman of the Board of Directors for the Petroleum Company of Trinidad and Tobago (Petrotrin). Now, he is President of the ENMAN Group, a set of technologies-based companies operating in Trinidad and Tobago and across the Caribbean. In addition to this role, Mr. Baldeosingh is President of the Southern Caribbean Cable Company. “These other countries are eking out cleaner, cheaper, and more sustainable alternatives to oil and gas. The Caribbean region is well-poised

to follow suit, given our range of hydro, geothermal, solar, and wind resources.” The Southern Caribbean Cable Project would be a transformative project for the region, bringing inexpensive energy and telecoms to Guyana and Suriname, and giving Trinidad a new market for the excess energy it currently produces and access to a viable landscape for the development of renewables. Mr. Baldeosingh completed BSc and MSc degrees in Electrical Engineering and started his career at the Trinidad & Tobago Electricity Commission, where he met his mentor and co-director at the South- 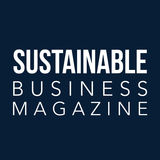