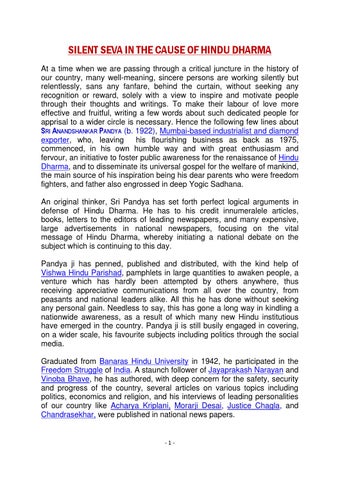 SILENT SEVA IN THE CAUSE OF HINDU DHARMA At a time when we are passing through a critical juncture in the history of our country, many well-meaning, sincere persons are working silently but relentlessly, sans any fanfare, behind the curtain, without seeking any recognition or reward, solely with a view to inspire and motivate people through their thoughts and writings. To make their labour of love more effective and fruitful, writing a few words about such dedicated people for apprisal to a wider circle is necessary. Hence the following few lines about SRI ANANDSHANKAR PANDYA (b. 1922), Mumbai-based industrialist and diamond exporter, who, leaving his flourishing business as back as 1975, commenced, in his own humble way and with great enthusiasm and fervour, an initiative to foster public awareness for the renaissance of Hindu Dharma, and to disseminate its universal gospel for the welfare of mankind, the main source of his inspiration being his dear parents who were freedom fighters, and father also engrossed in deep Yogic Sadhana. An original thinker, Sri Pandya has set forth perfect logical arguments in defense of Hindu Dharma. He has to his credit innumeralele articles, books, letters to the editors of leading newspapers, and many expensive, large advertisements in national newspapers, focusing on the vital message of Hindu Dharma, whereby initiating a national debate on the subject which is continuing to this day. Pandya ji has penned, published and distributed, with the kind help of Vishwa Hindu Parishad, pamphlets in large quantities to awaken people, a venture which has hardly been attempted by others anywhere, thus receiving appreciative communications from all over the country, from peasants and national leaders alike. All this he has done without seeking any personal gain. Needless to say, this has gone a long way in kindling a nationwide awareness, as a result of which many new Hindu institutious have emerged in the country. Pandya ji is still busily engaged in covering, on a wider scale, his favourite subjects including politics through the social media. Graduated from Banaras Hindu University in 1942, he participated in the Freedom Struggle of India. A staunch follower of Jayaprakash Narayan and Vinoba Bhave, he has authored, with deep concern for the safety, security and progress of the country, several articles on various topics including politics, economics and religion, and his interviews of leading personalities of our country like Acharya Kriplani, Morarji Desai, Justice Chagla, and Chandrasekhar, were published in national news papers.

A delegate to the United Nations Millennium Peace Summit held in New York (2000), he also had occasions to speak to large gatherings in conferences at New York, Frankfurt, Singapore and Durban. In India, he was felicitated by the Vice Chancellor of Banaras Hindu University on the occasion of their third International Alumni meet (2007). A moving spirit behind several activities, he has initiated Charitable Trusts which are engaged in various philanthropic activities. He was felicitated in the US for his learned writings and social work through the ‘Vande Mataram Foundation’ and ‘Save India Foundation’ (Desh Bachao Sangh), of which he is the President. Both the Foundations are dedicated to the welfare of the poor and the downtrodden. He has to his credit two other Trusts for helping the less privileged ones in the field of Education. Recently, his book: “Incredible India” containing profiles of many eminent personalities of India, from ancient to modern times and from all walks of life, was released by Swami Dayananda Saraswati in the US, and by Sri Sri Ravishankar in Delhi, before an august gathering. Later, copies of this book were presented to prominent persons including Barack Obama, the U.S. President. In grateful acknowledgement of the dedicated services of Sri Pandya to the Hindu Dharma, Samaj and the country, two eminent persons have the following to say: ‘What Sri Anandshankar Pandya is doing, will be written in golden letters in history’ (Swami Satyamitrananda Giri, Former Jagadguru Shankaracharya and the Founder of Bharath Mata Mandir, Haridwar). ‘Only after fifty years will the people realize what Anandshankar ji has contributed to the cause of the country’ (Padmashree Muzaffar Hussain, Journalist). Sri Anandshankar Pandya may be reached at: No. 273-283 Kalpataru Horizon, Tower A, S.K. Ahire Marg Worli (W), Mumbai – 400018 Tel: 982-060-8063, Tele-Fax: 022-24946607, E-mail: samarthanandpandya@gmail.com Silent Seva In The Cause of Hindu Dharma

At a time when we are passing through a critical juncture in the history of our country, many well-meaning, sincere persons are working sile...

Silent Seva In The Cause of Hindu Dharma

At a time when we are passing through a critical juncture in the history of our country, many well-meaning, sincere persons are working sile...