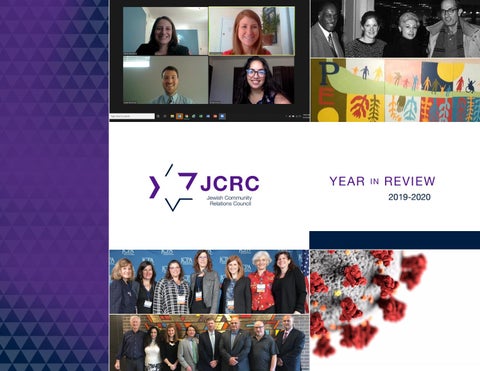 Grew our capacity to educate about contemporary antisemitism and Israel by expanding our professional team, with the hiring of Alexis Morrisroe as JCRC’s Education Program Manager. Alexis will spearhead the development and implementation of a new leadership development initiative designed to combat antisemitism and strengthen inclusive democracy. Set clearer standards for understanding antisemitism in the Jewish community relations field by leading an effort to unite JCRCs across the country in formally adopting the International Holocaust Remembrance Alliance’s Working Definition of Antisemitism. Advocated for an increase in government funding for Cincinnati nonprofits and schools that are vulnerable to hate violence by encouraging elected officials to substantially expand the Nonprofit Security Grant Program. Convened multiple briefings on strategies to counter antisemitism featuring Eric Ward, Deborah Lipstadt, Michael Lieberman and other experts. Enhanced our community’s security awareness through a Pre-High Holidays security briefing, in partnership with SAFE Cincinnati, featuring FBI officials and survivors of Pittsburgh’s Tree of Life shooting. Since last June, we’ve responded to more than 25 incidents of antisemitic and other hateful activity in the Greater Cincinnati region, in the form of bullying in schools, hateful graffiti on public parks and infrastructure, propaganda campaigns by hate groups, and antisemitic rhetoric from public officials, among other incidents. We also helped bring about the first federal conviction in our region under the Matthew Shephard Hate Crimes Prevention Act, in the wake of a 2017 antisemitic assault in Montgomery. We are currently the interim lead for the Cincinnati Regional Coalition Against Hate, which is now positioned to do even more work in assisting victims of hate crime and bias incidents.

Helped design various congregational civil discourse projects on the subject of Israel, in partnership with Resetting the Table, and hosted county-wide public library book discussions of Yossi Klein Halevi’s Letters to My Palestinian Neighbor, as part of Jewish Cincinnati’s We Need to Talk initiative.

Facilitated conversations about Israel and the changing geo-political landscape in the Middle East hosted by the Greater Cincinnati World Affairs Council.

Taught several dozen Cincinnati business leaders about the difference between fair criticism of Israel and when anti-Israel sentiment becomes antisemitism and responded to anti-Israel bias in educational spaces.

Generated community-focused breaking news updates about ongoing violence along the Gaza border, the multiple rocket attacks and Israel’s responses throughout the year.

Developed a comprehensive online resource platform in order to educate our community about a potential change in Israel’s policy in the West Bank.

Enhanced understanding of Israel at both Xavier University and the University of Cincinnati by connecting faculty and students with opportunities to travel there, preparing them for their trip, and discussing their experiences and impressions upon their return.

STRENGTHENING OUR COMMUNITY DURING COVID-19

Worked with Ohio Jewish Communities to help 18 Jewish Cincinnati organizations assess and communicate their COVID-19 needs to local, state, and federal elected officials, effectively making the case that emergency funding was critical for the survival of the nonprofit community. Our advocacy helped secure 95% of our communityâ&#x20AC;&#x2122;s requested funding.

Spoke out in support of members of the Chinese American community in the wake of hateful scapegoating, and joined with The Nancy & David Wolf Holocaust & Humanity Center to host an educational series about hate in the COVID era.

Endorsed state and national letters in support of increased and expanded nutrition assistance, increases in federal funding for state unemployment trust funds, refugee and asylum priorities, nonprofit support, and expansion of the Adjusted Gross Income limits for charitable contributions, which would enhance giving to many nonprofits. Responded to multiple antisemitic remarks and inappropriate Holocaust comparisons made by elected officials and others protesting Ohioâ&#x20AC;&#x2122;s stay at home order. We worked with SAFE Cincinnati to identify and mitigate potential threats from extremist actors who saw the COVID-19 pandemic as an opportunity to target the Jewish community.

Advocated for the passage of the Never Again Education Act, which dedicates funding to provide schools and parents with resources and training to teach youth the important lessons of the Holocaust.

Amplified the voice of Cincinnatiâ&#x20AC;&#x2122;s Jewish community on issues of concern in multiple op-eds and through interviews featured in local and national radio, television, and print media coverage.

Joined with other local nonprofits and immigration advocacy groups in the formation of a city-wide Rapid Response Network to support basic, immediate needs of immigrant and refugee families in Cincinnati.

Convened and helped to lead a Greater Cincinnati Voter Collaborative, designed to ensure Cincinnatians can safely cast their votes in the 2020 general election, through enhanced education, advocacy, and engagement.

Represented the Jewish community in interfaith and intercommunity conversations and action through participation in the Metropolitan Area Religious Coalition of Cincinnati (MARCC), the Cincinnati Regional Coalition Against Hate, the Faith and Community Alliance, EquaSion, the All-In Equity Coalition, the Immigrant Dignity Coalition, the Racial Justice Coalition, the Festival of Faiths, and Kids4Peace summer camp. Empowered leaders from the Bhutanese Community and Buddhist Society of Cincinnati to connect with their elected officials, advocate for their community priorities, and identify community building resources. Inspired more social issue education and dialogue with three additional Speak Up Speak Easy events. In partnership with the Jewish Federation of Cincinnati’s Young Adult Division (YAD), this year’s gatherings focused on Gun Safety, Women’s Health and Empowerment, as well as LGBTQA & Jewish Identity issues.

We were among the first Jewish organizations condemning the brutal murder of George Floyd at the hands of police, and issuing a call for all communities to recommit to the work of combatting racism.

Testified in favor of city-wide policing reforms, put forth by the Ohio Justice & Policy Center and Cincinnati Black United Front.

Co-sponsored and helped design and facilitate the second annual African American Leadership Weekend, in partnership with the Jacob Rader Marcus Center of the American Jewish Archives and the Philos Project. The weekend featured discussions on the past, present, and future of the Black-Jewish relationship, and unpacking the intersections between racism and antisemitism.

The Cincinnati Jewish Community Relations Council (JCRC) was established in the 1930s during a time when antisemitism in the United States—and right here in Cincinnati—was much more overt. While the antisemitic threat has changed over time, it is no less menacing, and our work is no less critical. In its annual audit, the Anti-Defamation League (ADL) reported the highest level of antisemitic incidents in 2019 since tracking began in 1979. As incidents of antisemitism and hate reach alarming new heights, we are engaging in new efforts to combat them, including forming new alliances with other communities in Cincinnati with the same goal. With this in mind, we organize our work around six values:

Compassion for the Vulnerable and Bereft

Just and Peaceful Resolution of Disputes

The JCRC is a unique Jewish institution in our community. Our board is representative of greater Cincinnati’s Jewish community and congregations and convenes a common table for open, diverse, inclusive, and consensus-driven discussions. We identify issues, articulate positions, and develop strategies, programs, and approaches to ensure the safety and security of our Jewish community and to advance the public affairs goals that will help to protect our community and its institutions. In pursuit of our mission, we at the Jewish Community Relations Council of Cincinnati have led successful initiatives to support our communi...

In pursuit of our mission, we at the Jewish Community Relations Council of Cincinnati have led successful initiatives to support our communi...