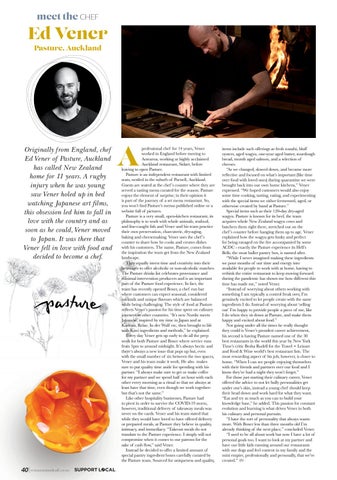 Originally from England, chef Ed Vener of Pasture, Auckland has called New Zealand home for 11 years. A rugby injury when he was young saw Vener holed up in bed watching Japanese art films, this obsession led him to fall in love with the country and as soon as he could, Vener moved to Japan. It was there that Vener fell in love with food and decided to become a chef.

professional chef for 14 years, Vener worked in England before moving to Aotearoa, working at highly acclaimed Auckland restaurant, Sidart, before leaving to open Pasture. Pasture is an independent restaurant with limited seats, nestled in the suburb of Parnell, Auckland. Guests are seated at the chef ’s counter where they are served a tasting menu curated for the season. Pasture enjoys the element of surprise; in their opinion it is part of the journey of a set menu restaurant. So, you won’t find Pasture’s menus published online or a website full of pictures. Pasture is a very small, open-kitchen restaurant, its philosophy is to work with whole animals, seafood, and line-caught fish and Vener and his team practice their own preservation, charcuterie, dry-aging, baking and cheesemaking. Vener uses the chef ’s counter to share how he cooks and creates dishes with his customers. The name, Pasture, comes from the inspiration the team get from the New Zealand landscape. They equally invest time and creativity into their beverages to offer alcoholic or non-alcoholic matches. The Pasture drinks list celebrates provenance and minimal intervention producers and is an important part of the Pasture food experience. In fact, the team has recently opened Boxer, a chef run bar where customers can expect seasonal, considered cocktails and unique flavours which are balanced while being challenging. The style of food at Pasture reflects Vener’s passion for his time spent on culinary journeys in other countries. “It’s new Nordic meets Japanese, inspired by my time in Japan and at Kadeau, Relae, In der Wulf etc, then brought to life with Kiwi ingredients and methods,” he explained. Every day Vener gets up early to do all the prep work for both Pasture and Boxer where service runs from 5pm to around midnight. It’s always hectic and there’s always a new issue that pops up but, even with the small number of six between the two spaces, Vener and his team make it work. He also makes sure to put quality time aside for spending with his partner. “I always make sure to get or make coffee for my partner and we spend half an hour with each other every morning as a ritual so that we always at least have that time, even though we work togetherbut that’s not the same.” Like other hospitality businesses, Pasture had to pivot in order to survive the COVID-19 storm, however, traditional delivery of takeaway meals was never on the cards. Vener and his team stated that while they would have loved to have offered delivery or prepared meals, at Pasture they believe in quality, intimacy, and immediacy. “Takeout meals do not translate to the Pasture experience. I simply will not compromise when it comes to our patrons for the sake of cash flow,” said Vener. Instead he decided to offer a limited amount of special pantry ingredient boxes carefully curated by the Pasture team. Sourced for uniqueness and quality,

items include such offerings as fresh wasabi, bluff oysters, aged wagyu, one-year aged butter, sourdough bread, month aged salmon, and a selection of cheeses. “As we changed, slowed down, and became more reflective and focused on what’s important (like time over food with loved ones) during quarantine we were brought back into our own home kitchens,” Vener expressed. “We hoped customers would also enjoy some time cooking, tasting, eating, and experimenting with the special items we either fermented, aged, or otherwise created by hand at Pasture.” Special items such as their 120-day dry-aged wagyu. Pasture is known for its beef, the team acquires whole New Zealand wagyu cows and butchers them right there, stretched out on the chef ’s counter before hanging them up to age. Vener explained how the wagyu gets funky and perfect for being ravaged on the fire accompanied by some ACDC - exactly the Pasture experience its Hell’s Bells, the most baller pantry box, is named after. “While I never imagined making these ingredients we pour months of our time and energy into available for people to work with at home, having to rethink the entire restaurant to keep moving forward during the pandemic has shown me how different this time has made me,” noted Vener. “Instead of worrying about others working with something I am typically a control freak over, I’m genuinely excited to let people create with the same ingredients I do. Instead of worrying about ‘selling out’ I’m happy to provide people a piece of me, like I do when they sit down at Pasture, and make them happy and excited about food.” Not going under all the times he really thought they could is Vener’s proudest career achievement, his second is having Pasture named one of the 30 best restaurants in the world this year by New York Time’s critic Besha Rodell for the Travel + Leisure and Food & Wine world’s best restaurant lists. The most rewarding aspect of his job, however, is closer to home. “When I can see people enjoying themselves with their friends and partners over our food and I know they’ve had a night they won’t forget.” For those just starting their culinary career, Vener offered the advice to not let bully personalities get under one’s skin, instead a young chef should keep their head down and work hard for what they want. “Eat and try as much as you can to build your knowledge base,” he added. This passion for constant evolution and learning is what drives Vener in both his culinary and personal pursuits. “I have the sort of personality that always wants more. With Boxer less than three months old I’m already thinking of the next place,” concluded Vener. “I used to be all about work but now I have a lot of personal goals too. I want to look at my partner and have our little kids running around our restaurants with our dogs and feel content in my family and the mini empire, professionally and personally, that we’ve created.” 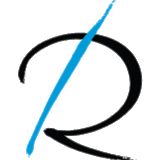