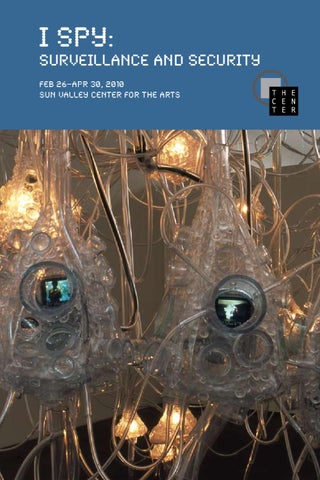 I Spy: Surveillance and Security Feb 26–Apr 30, 2010 The U.S. government has formally been in the surveillance business for at least a century (the FBI was founded in 1908). September 11, 2001 changed the tone and ­nature of that business as the country’s long-held assumption of safety was threatened. Our government now has unprecedented access into our private lives. Whether we are stopped at a red light, checking out a book at the library or talking on the phone, we know the government might be tracking us, either passively ­ or ­actively. Even in a small town, surveillance is part of daily life. The flip side of surveillance, of course, is security. Surveillance cameras play an increasingly significant role in solving crimes. Since 2001 the government has told us that increased surveillance is necessary to guarantee our

safety. Patriotism has long been linked to our nation’s strong civil liberties, but some of those liberties may be compromised to ensure our collective safety. Some argue, if you’re not doing anything wrong, why do you care if the government is listening and watching? How has the increased governmental and corporate ­ intrusion into our lives shaped our assumptions about what is private and what is public? How has it changed our behavior? What ­effect has the Internet had on our feelings about surveillance? Does the boom in ­social networking sites like Facebook signal that privacy is a thing of the past? Are we really more secure now than we were ten ­ years ago? This multidisciplinary project will explore these questions in an effort to get our audiences talking and thinking about the role surveillance plays in their own lives and communities.

Visual Arts / The Center, Ketchum Between 2003 and 2005, artist Deborah Aschheim created six installations she called Neural Architecture. Sculptural and interactive, these projects were “nervous systems” for buildings that incorporated equipment like baby monitors, surveillance cameras and closed circuit televisions. Neural Architecture got “smarter” and “grew” more senses each time it was exhibited at a new site. For I Spy, Aschheim will recreate one of the neural columns that emerged out of the project, which embraces our ambivalent attitudes toward surveillance. Interdisciplinary artist Hasan Elahi has made his everyday life part of his artwork. Erroneously targeted as a suspected terrorist and interrogated by the FBI over several months, Elahi decided that his best defense was to open up his life to public and governmental scrutiny. Tracking Transience: The Orwell Project is an online database that documents his travels, finances and even the meals he eats on airplanes. For I Spy, Elahi is creating a timely installation that draws on Tracking Transience and considers security and surveillance in the world of aviation. Artist, writer and geographer Trevor Paglen has created several bodies of work that explore the relationship between surveillance and security in a postSeptember 11th world. His long-distance photographs of secret military installations, photos of U.S. spy satellites in orbit and collections of badges created for classified military programs all explore a world of secret operations and surveillance that sometimes exists in plain sight. From 2003 to 2007 Paul Shambroom photographed facilities, equipment and personnel involved in the massive efforts to prepare for and respond to terrorist attacks within the nation’s borders. Some of these photos were taken at large-scale training environments like “Disaster City” in Texas and “Terror Town,” an abandoned mining community in New Mexico purchased with funds from the Department of Homeland Security. His dramatic images of personnel in their disaster gear, training in simulated settings, get at the difficulty we sometimes have discerning between legitimate security threats and paranoid fear.

Fri, Feb 26, 5:30-7pm The Center, Ketchum, Free Join us for drinks and ­appetizers as we celebrate the opening of I Spy. Artists Deborah ­Aschheim and Hasan Elahi will each give short talks about their work ­beginning at 6pm.

Tue, Mar 9, 2pm and by arrangement The Center, Ketchum, Free Trained docents offer new insight into the artwork on display in free tours of our exhibitions.

Thu, Mar 11 and Thu, Apr 8, 5:30pm The Center, Ketchum, Free Enjoy a glass of wine while you tour I Spy with The Center’s curators and docents.

Fri, Mar 5, 5-8pm The Center, Ketchum Join us for drinks and appetizers as you view the exhibition.

Classes FAMILY DAY I Spy: Surveillance and Security Sat, Apr 24, 3–5pm The Center, Ketchum, Free Join us as we discover the exhibition I Spy. Families will have an opportunity to look at the exhibition and create a periscope of their own design. Looking over the fence or out the nearest window never seemed so easy!

TEEN WORKSHOP Video Production with Mark Oliver Sat &amp; Sun, Apr 24 &amp; 25, 10am–4pm The Center, Hailey $15 pre-registration required This two-day intensive workshop will cover the basic aspects of video production including the importance of visual storytelling, editing and sound design. Participants will develop simple script ideas and, while moving into the basics of shooting, will learn the correct way to care for and use cameras and the importance of working as a team to conceptualize and produce a film.

Lectures Frederick Lane Wed, Mar 10, 7pm NexStage Theatre, Ketchum $10 / $15 nonmembers From social networking and government surveillance to sexting and cyberporn, attorney and technology expert Frederick Lane takes a hard look at the rapidly evolving world of computers, privacy and free speech. He is the author of five books, most recently American Privacy: The 400-Year History of Our Most Contested Right, a study of the right to privacy. Lane is a frequent guest on national television programs and a popular lecturer at universities and organizations across the country.

John Lehman on the Role of Surveillance in National Security Thu, Apr 1, 7pm The Center, Ketchum $10 / $15 nonmembers John Lehman is currently chairman of J.F. Lehman &amp; Company, a private equity investment firm. During the Reagan Administration, Lehman served for six years as Secretary of the Navy. He was president of Abington Corporation between 1977 and 1981 and served 25 years in the naval reserve. Lehman was a staff member to Dr. Henry Kissinger on the National Security Council, as delegate to the Force Reductions Negotiations in Vienna and as Deputy Director of the U.S. Arms Control and Disarmament Agency. Dr. Lehman served as a member of the 9/11 Commission. He is also an Advisory Board member of the Partnership for a Secure America, a non-profit dedicated to recreating the bipartisan center in American national security and foreign policy. The Center has invited Dr. Lehman to share his perspective on the importance of security and the role that surveillance plays in the post-9/11 world. mailer: Trevor Paglen, Five Classified Squadrons (detail), 2007, 5 fabric patches, framed, courtesy of Altman Siegel Gallery, San Francisco cover: Deborah Aschheim, Panopticon (Neural Architecture no. 4) (detail), 2004, hand sewn plas足 tic bathmats, incandescent light, sensors, spy cameras, pocket televisions, magnifying lenses, video, CCTV, installed at Ben Maltz Gallery, Otis College of Art and Design, Los Angeles, CA, courtesy of the artist

Surveillance and Security Feb 26–Apr 30, 2010 Sun Valley Center for the Arts safety. Patriotism has long been linked to our nation’s strong civil liberties, but some of those liberties may be compromised to ensure our collective safety. Some argue, if you’re not doing anything wrong, why do you care if the government is listening and watching? 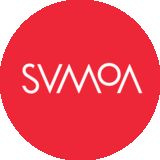