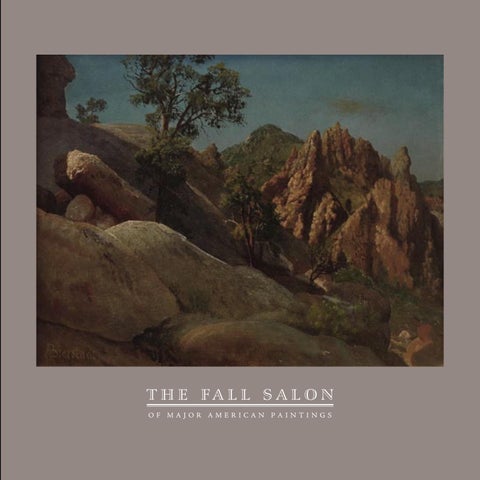 (FREDERICK) CHILDE HASSAM, NA (1832-1918) Sunrise - Autumn, 1885 12 x 18 inches | oil on canvas | signed lower left Riding high with strong sales from his first solo exhibition in 1882, and newly married to Kathleen Maud Doane, Hassam set out one morning to capture the immense sense of possibility that the sunrise affords the artist. Hassam’s ability to balance the academic preference for Realism against the poetry of painterly application shows particularly strongly in this work. The year after this work was painted, Hassam left for Paris to study at the Académie Julian. His success only continued to grow and he died one of America’s most celebrated Impressionists.

ROBERT HENRI (1832-1918) Portrait of a Man, c. 1890s 32 x 26⅞ inches | oil on canvas | signed lower right Robert Henri was born Robert Henry Cozad, but was forced to change his name in childhood when his father committed a crime. This traumatic event may help explain the artist’s lifelong sympathy for people born into unfortunate circumstances. In this painting, a proud, if improvished, gypsy peeks out of the shadows. Henri’s convictions eventually compelled him to formally break with the National Academy along with seven other artists known as “the Eight” or the “Ashcan” school in 1908.

THOMAS McGLYNN (1878-1966) Fall Sycamores, c. 1930s 36 x 34 inches | oil on canvas | signed lower right McGlynnâ&amp;#x20AC;&amp;#x2122;s refined sense of design extended naturally from his years at the California School of Design, where he studied under Arthur Matthews. After decades of teaching and exhibiting, McGlynn was invited to join the Carmel Artist Colony by Armin Hansen. McGlynn settled in the area with his wife in 1934, happily painting the landscape of his native California. The golden light that permeates this coastal scene demonstrates the artistâ&amp;#x20AC;&amp;#x2122;s admiration for the Tonalism of Northern California artists like Gottardo Piazzoni.

JAMES RENWICK BREVOORT, NA (1832-1918) Sunset, c. 1870 19¼ x 38⅞ inches | oil on canvas | signed lower right Brevoort chose the life of an artist after earning his degree in architecture from New York University in 1854. Although he trained under the Vice President of the National Academy of Design as a child, Brevoort’s preference for oil painting wasn’t absolutely decided until around 1860. By 1863, he was elected to the National Academy of Design, where he later taught. Brevoort’s landscapes celebrate the divine mystery of skies lit up by sunrise and sunset. In this painting, the words of Thoreau resonate, “...the sunset in my latest November shall translate me to the ethereal world.”

WHD (WILLIAM HENRY DETHLEF) KOERNER (1878-1938) Koerner House, Rocky Neck, Gloucester, Massachussets, 1922 24 x 24 inches | oil on canvas | signed lower right WHD Koerner received training at the Art Institute of Chicago, the Art Students League in New York, and the Howard Pyle School of Art. His inate abilities thus refined, Koerner made his living principally from commercial illustration for the Chicago Tribune and the Saturday Evening Post. As an artist in constant demand, Koerner found little time to paint for himself, but in this rare work, the artist captured his wife on the porch of their home in Gloucester. The bright, sun dappled scene rendered in a Post-Impressionist style suggests an artist happy to paint for himself.

BJO (BROR JULIUS OLSSON) NORDFELDT (1878-1955) Still Life with Squash, 1940 26 x 32 inches | oil on canvas | signed lower right After training at the Art Institute of Chicago and the AcadĂŠmie Julian, Nordfeldt eventually made his home in Santa Fe, New Mexico -- then a hotbed for American modernism. His strong sense of shape and composition, acquired in part from his exposure to Paul CĂŠzanne, found a uniquely American expression in this still life with squash. Nordfeldt was particularly sympathetic to the Native American population, and the choice of squash - a Native American vegetable - paid quiet tribute to them in this work. 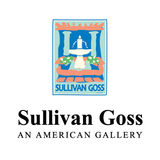