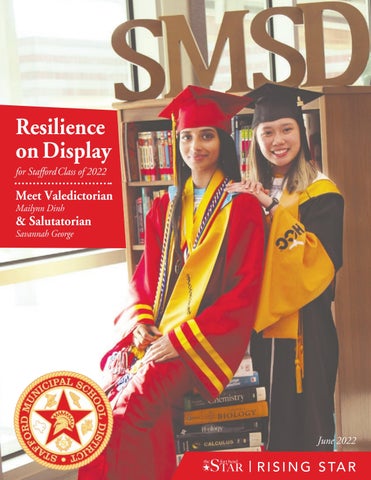 Resilience on Display for Stafford Class of 2022

Resilience on display for Stafford Class of 2022 By Landan Kuhlmann LKuhlmann@fortbendstar.com

ike all of this year’s graduating classes around the Houston region, the 260 Stafford High School seniors walking the stage have gone through a tumultuous high school career. From a normal freshman year, to a sophomore year interrupted by COVID-19, then a junior year of largely virtual learning. Finally, there was re-acclimation to “normal” school routines. It’s a four-year period that Stafford principal Raymond Root said won’t soon be forgotten. “I’d say it has been the most un-normal ‘normal’ senior year that has ever happened,” he said. “It took a lot of adjustment to get back into the swing of things.” But the students haven’t been fazed, he said, and are in the process of culminating their high school careers. “I think their resiliency has really been on display this year,” Root said. “They’ve had a lot of responsibilities thrown on them, but they’re excited to have the normal things happen at the end of the school year. It’s a credit to them for their hard work.” Part of that return to normalcy, he said, are things that those looking in from the outside might not see as a huge cause for celebration. But he

even those small moments – senior prom, physically walking across the stage, and more – represent something much bigger to the hundreds of Stafford seniors, according to Root. Ultimately, he said, they are memories that can be passed down through generations, tales of years past and proof that anything can be overcome. “The process of getting through high school and setting out on your own is important to your own personal legacy that your grandkids are going to ask you about one day. It’s the legacy of it all, being able to tell that story” he said. “It’s important for the kids to be a part of that.” From a personal standpoint, he said the payoff is seeing how each of their 260 graduates’ lives have twisted and turned, but will still culminate with them being ready for the rest of their lives. Each one is unique, he said, and has walked their own journey According to Root, virtually nothing compares to seeing the success of their students as they leave Stafford’s halls. “They’ve all had struggles, and they’ve all had successes. To see that come to fruition and know what we worked so hard to do…is the reward as an administrator,” he said. “We love seeing each kid’s journey and what they’ve overcome to get to this point. All those things are victories, and being able to celebrate that with the kids is great.” In the end, he said once someone has walked the halls of Stafford MSD, they’re a Spartan for life, and hopes they won’t ever forget that. “Don’t forget where you came from,” he said. “You’re always going to have a home in Stafford, you’re always going to be welcomed here – no matter how far you go or how close you stay.”

SMSD STUDENT SPOTLIGHTS The past two years have not been easy for any student – but two of Stafford High School’s students powered through along with their classmates and stood out above the rest. In the below profiles, you’ll hear from Valedictorian Mailynn Dinh and Salutatorian Savannah George. Both students have excelled on many fronts

during their time at Stafford. Dinh has already earned her associate’s degree through the school’s partnership with the local Houston Community College, and will enter the University of Houston as a sophomore in credit hours. George, meanwhile, is part of the National Honor Society and has also participated in tennis, cross country, and more while

at Stafford in addition to her academic achievements. “They’re both incredible young ladies,” Stafford director of College and Career Services Deborah Nordt said. So take a look below for Dinh and George’s thoughts on their past, present, and future.

Student Spotlight: Valedictorian Mailynn Dinh How would you best describe how you’re feeling coming upon the end of your high school career? The one word I think about is bittersweet. I’m leaving everything I’ve ever known, but I’m also really excited for the future. What would you have to say about the resiliency of not just your class, but all the students here with the obstacles you’ve faced? The former valedictorian had something in his speech – when animals are put into a new habitat, they’re forced to adapt. And that’s like us – we were forced to adapt with our circumstances. In your own words, what has been the best part of your time here at Stafford? You learn something new every single day, and not just academics – you learn about yourself, and you can take what you’re willing to give. I’m a very inquisitive person, and the more I ask questions the more I learn.

Where are planning to attend college, and what do you plan to study? I plan to attend the University of Houston and study accounting. My mom has always been an accountant working on her spreadsheets, and

my twin sister and I have always been amazed with numbers and the Excel sheets. We have a thing here at Stafford where we partner with HCC for college credit, so I’m going into UH as a sophomore. What are you most excited about for the future? It’s a new chapter. I like this chapter, but there comes a time in life where have to move on – and it’s hard to let go, but when you look into the real world see these new things and amazing opportunities, it’s very exciting. You get to be your own person. If you had one piece of advice for the next graduating class, what would it be Enjoy yourself. I enjoyed learning, growing, and being around these people, but I feel like most of the times I just kind of stressed and was so concerned about getting the next ‘A’ on the next quiz or exam that I put aside my friends to study. Have fun.

Student Spotlight: Salutatorian Savannah George How would you best describe how you’re feeling coming upon the end of your high school career? I’ve spent most of life here and grown up around all these people, now everyone’s leaving and going on their own path. But it’s really exciting to see how everyone disperses, how they grow, and what they can accomplish. What would you have to say about the resiliency of not just your class, but all the students here with the obstacles you’ve faced (COVID-19, virtual learning, etc.)? I think we’ve shown that we’re really adaptable – not just as students, but as people in general with the mental circumstances and physical circumstances. Even if life throws any hurdle at us, as long as you have the mental will and have the support of others, you can get through anything. In your own words, what has been the best part of your time here at Stafford? For me, it’s the personal growth. When I think about my freshman and sophomore year versus myself now, I’m amazed at how much I’ve changed – not just academically, but with my friend group,

my interests. To see that growth and how I’m progressing as a person makes me excited for the person I’m going to be in the future. Where are planning to attend college, and what do you plan to study? I’m planning to go to NYU in New York and double major in architecture and civil engineering. I’ve always liked STEM courses, so I wanted to go

into engineering keep going in that science area. I’m also a very artsy, creative person, so I feel like architecture is that balance in both. What are you most excited about for the future? I’m excited about the independence and the fact that I’m going to be able to be out on my own – especially when I’m in New York. Being in a big city and surrounded by these big personalities and characters, I’m excited to be my own person and grow in myself and also in society. I know there’s going to be struggles and challenges and I’m going to fail a lot – but it’s going to make me that much stronger. If you had one piece of advice for the next graduating class, what would it be? Obviously grades are important, and as valedictorian and salutatorian we both worked really hard. But also learn to prioritize yourself sometimes. Education should be number one, but take care of your mental health first. Don’t ever let the future overshadow the present you’re in right now. Because if you’re not healthy right now, you’re not going to be healthy in the future. Always put yourself first.

A Message from Superintendent Dr. Robert Bostic That’s a wrap! Senior Spartans, it was the year of the comeback as all of you returned to face-to-face learning and getting reacclimated to the classroom. You are full of unique gifts and talents, and you hold the keys to your future. Remember, dreams are goals with timelines. I encourage each of you to write down your vision, chase your passions, and surround yourself with people who will challenge you to go higher. You are forever a part of #StaffordNation! Our mission at SMSD is to prepare each student to become college and career ready without remediation. www.staffordmsd.org | 281-261-9200 Follow Us