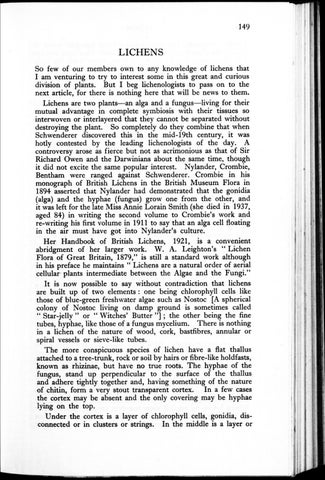 LICHENS So few of our members own to any knowledge of lichens that I am venturing to try to interest some in this great and curious division of plants. But I beg lichenologists to pass on to the next article, for there is nothing here that will be news to them. Lichens are two plantsâ&#x20AC;&#x201D;an alga and a fungusâ&#x20AC;&#x201D;living for their mutual advantage in complete symbiosis with their tissues so interwoven or interlayered that they cannot be separated without destroying the plant. So completely do they combine that when Schwenderer discovered this in the mid-19th Century, it was hotly contested by the leading lichenologists of the day. A controversy arose as fierce but not as acrimonious as that of Sir Richard Owen and the Darwinians about the same time, though it did not excite the same populĂ¤r interest. Nylander, Crombie, Bentham were ranged against Schwenderer. Crombie in his monograph of British Lichens in the British Museum Flora in 1894 asserted that Nylander had demonstrated that the gonidia (alga) and the hyphae (fungus) grow one from the other, and it was left for the late Miss Annie Lorain Smith (she died in 1937, aged 84) in writing the second volume to Crombie's work and re-writing his first volume in 1911 to say that an alga cell floating in the air must have got into Nylander's culture. Her Handbook of British Lichens, 1921, is a convenient abridgment of her larger work. W. A. Leighton's " Liehen Flora of Great Britain, 1879," is still a Standard work although in his preface he maintains " Lichens are a natural order of aerial cellular plants intermediate between the Algae and the Fungi." It is now possible to say without contradiction that lichens are built up of two elements : one being Chlorophyll cells like those of blue-green freshwater algae such as Nostoc [A spherical colony of Nostoc living on damp ground is sometimes called " Star-jelly " or " Witches' Butter "] ; the other being the fine tubes, hyphae, like those of a fungus mycelium. There is nothing in a liehen of the nature of wood, cork, bastfibres, annular or spiral vessels or sieve-like tubes. T h e more conspicuous species of liehen have a flat thallus attached to a tree-trunk, rock or soil by hairs or fibre-like holdfasts, known as rhizinae, but have no true roots. T h e hyphae of the fungus, stand up perpendicular to the surface of the thallus and adhere tightly together and, having something of the nature of chitin, form a very stout transparent cortex. In a few cases the cortex may be absent and the only covering may be hyphae lying on the top. Under the cortex is a layer of Chlorophyll cells, gonidia, disconnected or in Clusters or strings. In the middle is a layer or

bündle of hyphae, but these tubes do not transport water or food to the other parts—no transport of water takes place and one part of a growth may be fresh and living where water lies while other parts are temporarily dead. If the thallus lies flat there is no under cortex, but only the remains of old hyphae. In other lichens with a branching, round twiglike thallus a pith of hyphae runs down the centre and is enclosed in a cylindrical layer of gonidia and that is enclosed in a cortex layer of hyphae. Another type of thallus, especially in the gelatinous lichens, has the alga cells and the fungus hyphae evenly distributed in one interwoven mass. This type seems to be more primitive than the stratified species. The fruit originates deep in the thallus as a spherical mass and gradually rises to the surface and either opens out into a cup-shaped form—the apothecium—or keeping its spherical envelope—perithecium—pushes partially or wholly out with generally a small hole at the top. At the bottom of the cup there are two sets of hyphae, both sending up branches which end in long cells, one set known as paraphyses, thin and barren, the other, asci, broad above and containing spores, usually 8, but may be 1, 2, 4, 6, or even hundreds. On the thallus various small growths occur, in shape a round hollow, containing simple branching hyphae of few or many cells. The terminal cell drops off and in some cases grows into a small plant. If it is incapable of growth, it is thought to be a kind of antherozoid, which by some imperfectly known sexual process leads to the formation of the apothecium. Other growths on nearly all lichens consist of white or grey dust known as soredia either scattered more or less thinly over the thallus, collected at edges or angles or massed in heaps. Each grain of dust consists of one or more Chlorophyll cells surrounded by a web of hyphae and is in fact a young thallus which has broken away from the parent and will at once begin to grow on reaching a suitable resting place. Their enormous numbers and lightness cause them to be carried from pole to pole and to the tops of the highest mountains. The mean temperature of the Antarctic continent is never above freezing point and high winds blow from the land and repel any warming influence from the sea, and yet on exposed rocks grey or orange lichens grow, and here and there over the snow is the red dust of the hardier algae. In contrast in the Arctic summer the tundra is bright with flowers and lichens are very numerous. Elsewhere in the world liehen life is completely stagnant during periods of intense cold or heat or drought, for lichens having no internal water transport can only take in water on the exaet spot where it falls. Since many lichens are thus " dead " during a large part of their existence, it is no wonder

that they are the pioneers of the vegetable world and find no climate too rigorous for existence—on bare igneous rocks, in scorched deserts, in the Arctic. The new formation of a liehen from a fungus spore and an alga may be extremely rare without at all affecting the spread of lichens which are mostly propagated by soredia, which are borne everywhere by wind and in damp places at once Start growth—water vapour in the air keeps them moist and living. Minute fungus spores too are wafted everywhere. They are seen as dust on Alpine and Arctic snowfields. Red snow was first noticed by De Saussure in 1760 in the Alps, and later by Ross and others in the Arctic. The colour is due to an alga which begins to grow as soon as the sun begins to thaw the snow. Lichens object only to two localities—water and impure air ; only one, in America, lives in water, though a few are amphibious. The neighbourhood of a manufacturing town is an impossible locality—one does not see lichens within several miles of Manchester, but Ipswich has not yet befouled its air too much for them, though some chimneys are doing their best, for one can see a few species in Christchurch Park and elsewhere. On new barren lands containing no organic matter, e.g., after a landslide or fall of volcanic ash, the algae arrive first. After rain the algal cell could fill itself with water, but it has no power to dissolve the infinitesimal quantity of mineral matter it needs out of the rock. It can make organic matter from carbon dioxide in the air—this carbonic acid sometimes eats into calcareous rocks forming shallow depressions in which the liehen half buries itself. The fungus can störe water for some time, but if it cannot find carbonaceous food from a host it cannot live. As each needs what the other can produce, together they find a modus vivendi. So not only have lichens preceded other plants which later take their places, but they have permanently occupied places that no other plants can reach. Lichens are the slowest growing of plants. The common yellow liehen that we see on walls and roofs in Suffolk, Xanthoria parietina, was found by Crombie after 45 years not to have developed apothecia, so that the plant had not attained füll growth. I myself have seen lately a patch of this golden liehen on the same spot on a roof where I admired it 60 years ago and not appearing to have spread much. It has been estimated that the Reindeer Moss, Cladonia rangiferina, must take 200 years to attain a height of 18 inches. They are possibly the longest lived of all plants, older than the giant Sequoias of California. Cladonia rangiferina is scarcely distinguishable except by chemical analysis from C. sylvatica which you must have noticed growing among calluna on Suffolk heaths. Mr. Mayfield says in his " Lists of Lichens of Suffolk " that records of C. rangiferina for this county must be referred to C. sylvatica. Reindeer, however, know the difference, they will not touch sylvatica.

However only two of the 4,000 species of liehen are known to be poiso'nous. Red lndiars, Canadian trappers and explorers and stranded seamen have kept themselves alive on Gyrophora spp.—several species of this genus grow on our mountains, but do not look for them in Suffolk. In Iceland poor people collect and störe Iceland Moss, Cetraria islandica, for winter food. i t contains a large amount of starch and after the acid, which gives it a bitter taste, has been soaked out it makes an excellent soup or pudding. It is the onlv liehen still in the British Pharmacopaeia, you can buy it from a "chemist. T h e manna of the Israehtes has been identified as the liehen Lecanora essculenta or L. affims, which occurs through all the desert regions from Algeria to Turkestan. It grows on rocks from which it breaks loose and curls up into small lumps and blows about the desert. In recent times people have lived on it temporarily—the miracle consisted in its appearing so opportunely. Mr. Mayfield lists several Lecanora spp. for Suffolk but not esculenta. But on the Downs of Dorset and Sussex another liehen that grows on Amts,Parmelia revoluta concentrica, has very similar habits and is to be tound rolling about, still living, in a few spots. In olden days lichens were much more used than to-day to obtain dyes. We should naturally expect the brightly coloured ones to give the finest dyes, but it is the whitish and blackish ones that give the best, though most of the yellow ones such as Xanthoma parietina give a yellow dye. White Crottle Lecanora parella* and Swedish Moss, L. tartarea,\ common on the »cottish and English mountains give scarlet, purple and blue. Roccella is still used to give a fine purple. It is now scanty round our coasts, but I believe I found a tuft or two on rocks just above the tide mark near Combe Martin. Hence the gay tartans worn by Celtic Gauls and Brilons in Caesar's time. [pace those Illustrators of Latin Books tor Beginners who represent them in Palaeolithic skins or nakedness.J I wonder what colours King Arthur and Lancelot and the rest chose for their kilts. . M r . Mayfield, writing in Transactions, 1929, gives the number of known species of lichens in Suffolk as 283 He has W l y given me a reprint of his " List of species and locahties from the Ipswich and District Field Club's J o u r n a i y c L l p t 2 a n d of his " Lichens of the Boulder Clay » (Vol. V, 1916). But he savs that there is still much to be done to bring these records up-to-date. In addition to the authorities I have referred to, I am indebted to a reprint of a lecture by my father. J.C.N.W. •Recorded bv Mr. Mavfield at Great Glemham, Rendham and elsewhere in SuflFolk. t A t Bury St. Edmunds.