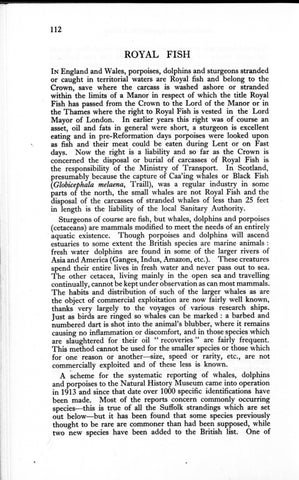 ROYAL FISH IN England and Wales, porpoises, dolphins and sturgeons stranded or caught in territorial waters are Royal fish and belong to the Crown, save where the carcass is washed ashore or stranded within the limits of a Manor in respect of which the title Royal Fish has passed from the Crown to the Lord of the Manor or in the Thames where the right to Royal Fish is vested in the Lord Mayor of London. In earlier years this right was of course an asset, oil and fats in general were short, a sturgeon is excellent eating and in pre-Reformation days porpoises were Iooked upon as fish and their meat could be eaten during Lent or on Fast days. Now the right is a liability and so far as the Crown is concerned the disposal or burial of carcasses of Royal Fish is the responsibility of the Ministry of Transport. In Scotland, presumably because the capture of Caa'ing whales or Black Fish (Globicephala melaena, Traill), was a regulär industry in some parts of the north, the small whales are not Royal Fish and the disposal of the carcasses of stranded whales of less than 25 feet in length is the liability of the local Sanitary Authority. Sturgeons of course are fish, but whales, dolphins and porpoises (cetaceans) are mammals modified to meet the needs of an entirely aquatic existence. Though porpoises and dolphins will ascend estuaries to some extent the British species are marine animals : fresh water dolphins are found in some of the larger rivers of Asia and America (Ganges, Indus, Amazon, etc.). These creatures spend their entire lives in fresh water and never pass out to sea. The other cetacea, living mainly in the open sea and travelling continually, cannot be kept under Observation as can most mammals. The habits and distribution of such of the larger whales as are the object of commercial exploitation are now fairly well known, thanks very largely to the voyages of various research ships. Just as birds are ringed so whales can be marked : a barbed and numbered dart is shot into the animal's blubber, where it remains causing no inflammation or discomfort, and in those species which are slaughtered for their oil " recoveries " are fairly frequent. This method cannot be used for the smaller species or those which for one reason or another—size, speed or rarity, etc., are not commercially exploited and of these less is known. A scheme for the systematic reporting of whales, dolphins and porpoises to the Natural History Museum came into Operation in 1913 and since that date over 1000 specific identifications have been made. Most of the reports concern commonly occurring species—this is true of all the Suffolk strandings which are set out below—but it has been found that some species previously thought to be rare are commoner than had been supposed, while two new species have been added to the British list. One of

the most interesting of these last was the occurrence of the False Killer (Pseudorca crassidens, Owen). This animal, first described from a sub-fossil specimen in the Cambridge Fens, goes about in schools and for some reason occasionally runs ashore in large numbers. The Cambridge specimen was probably the result of such a stranding when the fens were part of the sea, as were specimens discovered in a silted up part of the Zuider Zee in Holland and in 1937 in the Thames gravel on the site of the Scotland Yard extensions. Specimens in the flesh were first recorded in this country in 1927 when a school of about 150 stranded in Dornoch Firth, Sutherlandshire and strandings of smaller numbers occurred in 1934 and 1935 in S. Wales, Lincolnshire, Norfolk and N.E. Scotland. Quite apart from such records of new species, the data about place, time and frequency of strandings are giving a good deal of information on the behaviour of cetaceans, while examination of adults and the size, etc., of immature specimens are throwing light on their breeding habits. Reports are sent to the Museum by Receivers of Wrecks and Officers of the Coast Guard Service. The number of reports of strandings now received is much less than in pre-war years : it is thought that this is probably connected with the reduction in number of the coast guards round the coast, but it may be that cetaceans are not now so abundant in British waters. Members who live on or who regularly visit the coast should therefore look for stranded dolphins or porpoises—a whale is unlikely to have escaped Observation—and report any found to the nearest Coastguard whose number can be found in the telephone directory. The Coastguard will make a füll report to the Museum, but for the interest of members the following key (based, by permission of the Trustees, on those in " Stranded Whales and Turtles " by F. C. Fräser and H. W. Parker, which can be obtained from the British Museum (Natural History), S.W.7, price 2/-) should serve to identify any porpoises or dolphins found. N.B.—In all cetaceans the tail is horizontal : if the tail is vertical the specimen is a fish. KEY. "Whalebone present on palate. Teeth absent. Lower jaw very wide its halves arched outwards - (WHALEBONE W H A L E S ) . 1 . s Whalebone absent. Teeth present, though sometimes concealed beneath the gum. Lower jaw narrow, at least in .front . . . T O O T H E D WHALES 2. R Length more than 1 2 feet, with or without back fin - ( W H A L E S ) . 2.< Length less than 12 feet, back fin present, teeth in both Ijaws, more than 1 5 pairs - D O L P H I N S AND PORPOISES 3 .

' U p p e r lip white. Dark colour of flippers continuous with that of body, their lower margin not much curved. Teeth, about 25 pairs in each jaw, diameter, J inch W H I T E - B E A K E D D O L P H I N (Lagenorhynchus albirostris, Gray). 6. -j Upper lip black. Flippers, with strongly curved lower margin arising from white part of body, usually connected with dark part by a narrow dark streak. A conspicuous white region on each side, behind the back-fin. Teeth, 30 - 40 pairs in each jaw ; diameter, ^ inch WHITE-SIDED DOLPHIN (Lagenorhynchus acutus, Gray). f A well-marked, narrow dark band of pigment extending from the eye along the flank and curving down to the vent, with a subsidiary branch in the region of the flipper inserEUPHROSYNE D O L P H I N 7 . tion (Stenella euphrosyne, Gray). This band wanting, but an arrangement of yellowish, white and dark bands on the sides of the body - C O M M O N D O L P H I N (Delphinus delphis, Linn.). T h e reproductive organs are usually hidden within the body but the sexes can be distinguished by the distance between the reproductive opening and the vent, that of the male being much further forward than is the case with the female. In the male porpoise the distance between the vent and the reproductive opening is 7 inches to 13 inches (about 21% of the total length) in the female 2 inches to 4 inches (about 6% of the total length). On each side of the reproductive opening in the female is a slit containing a teat, which may not be discovered unless it is. looked for.

In addition a common rorqual (Balaenoptera physalus, Linn) was stranded at Aldeburgh 9.4.18 and a killer (Orcinus orca, Linn) at Lowestoft 21.11.26.