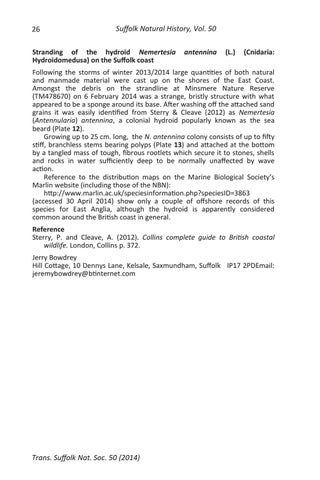 Stranding of the hydroid Nemertesia Hydroidomedusa) on the Suffolk coast

Following the storms of winter 2013/2014 large quantities of both natural and manmade material were cast up on the shores of the East Coast. Amongst the debris on the strandline at Minsmere Nature Reserve (TM478670) on 6 February 2014 was a strange, bristly structure with what appeared to be a sponge around its base. After washing off the attached sand grains it was easily identified from Sterry & Cleave (2012) as Nemertesia (Antennularia) antennina, a colonial hydroid popularly known as the sea beard (Plate 12). Growing up to 25 cm. long, the N. antennina colony consists of up to fifty stiff, branchless stems bearing polyps (Plate 13) and attached at the bottom by a tangled mass of tough, fibrous rootlets which secure it to stones, shells and rocks in water sufficiently deep to be normally unaffected by wave action. Reference to the distribution maps on the Marine Biological Societyâ&#x20AC;&#x2122;s Marlin website (including those of the NBN): http://www.marlin.ac.uk/speciesinformation.php?speciesID=3863 (accessed 30 April 2014) show only a couple of offshore records of this species for East Anglia, although the hydroid is apparently considered common around the British coast in general. Reference Sterry, P. and Cleave, A. (2012). Collins complete guide to British coastal wildlife. London, Collins p. 372. Jerry Bowdrey Hill Cottage, 10 Dennys Lane, Kelsale, Saxmundham, Suffolk IP17 2PDEmail: jeremybowdrey@btinternet.com