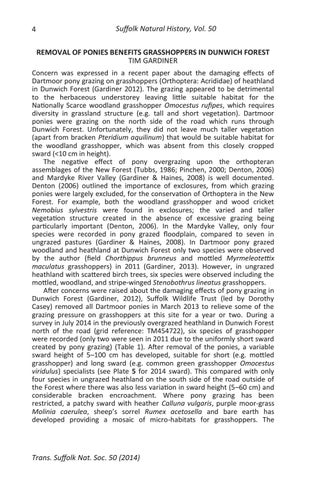 Concern was expressed in a recent paper about the damaging effects of Dartmoor pony grazing on grasshoppers (Orthoptera: Acrididae) of heathland in Dunwich Forest (Gardiner 2012). The grazing appeared to be detrimental to the herbaceous understorey leaving little suitable habitat for the Nationally Scarce woodland grasshopper Omocestus rufipes, which requires diversity in grassland structure (e.g. tall and short vegetation). Dartmoor ponies were grazing on the north side of the road which runs through Dunwich Forest. Unfortunately, they did not leave much taller vegetation (apart from bracken Pteridium aquilinum) that would be suitable habitat for the woodland grasshopper, which was absent from this closely cropped sward (<10 cm in height). The negative effect of pony overgrazing upon the orthopteran assemblages of the New Forest (Tubbs, 1986; Pinchen, 2000; Denton, 2006) and Mardyke River Valley (Gardiner & Haines, 2008) is well documented. Denton (2006) outlined the importance of exclosures, from which grazing ponies were largely excluded, for the conservation of Orthoptera in the New Forest. For example, both the woodland grasshopper and wood cricket Nemobius sylvestris were found in exclosures; the varied and taller vegetation structure created in the absence of excessive grazing being particularly important (Denton, 2006). In the Mardyke Valley, only four species were recorded in pony grazed floodplain, compared to seven in ungrazed pastures (Gardiner & Haines, 2008). In Dartmoor pony grazed woodland and heathland at Dunwich Forest only two species were observed by the author (field Chorthippus brunneus and mottled Myrmeleotettix maculatus grasshoppers) in 2011 (Gardiner, 2013). However, in ungrazed heathland with scattered birch trees, six species were observed including the mottled, woodland, and stripe-winged Stenobothrus lineatus grasshoppers. After concerns were raised about the damaging effects of pony grazing in Dunwich Forest (Gardiner, 2012), Suffolk Wildlife Trust (led by Dorothy Casey) removed all Dartmoor ponies in March 2013 to relieve some of the grazing pressure on grasshoppers at this site for a year or two. During a survey in July 2014 in the previously overgrazed heathland in Dunwich Forest north of the road (grid reference: TM454722), six species of grasshopper were recorded (only two were seen in 2011 due to the uniformly short sward created by pony grazing) (Table 1). After removal of the ponies, a variable sward height of 5–100 cm has developed, suitable for short (e.g. mottled grasshopper) and long sward (e.g. common green grasshopper Omocestus viridulus) specialists (see Plate 5 for 2014 sward). This compared with only four species in ungrazed heathland on the south side of the road outside of the Forest where there was also less variation in sward height (5–60 cm) and considerable bracken encroachment. Where pony grazing has been restricted, a patchy sward with heather Calluna vulgaris, purple moor-grass Molinia caerulea, sheep’s sorrel Rumex acetosella and bare earth has developed providing a mosaic of micro-habitats for grasshoppers. The

Table 1: Occurrence (X = presence) of grasshopper species in pony grazed and ungrazed heathland in Dunwich Forest area in 2011 (before removal of Dartmoor ponies in March 2013) and 2014 (two summers after removal of ponies)

connectivity of the Dunwich Forest heathland with other excellent sites for grasshoppers (e.g. Westleton Heath) means that colonisation of the sward in the absence of pony grazing has been very quick. The heathland (six grasshopper species in 2011) on the southern side of the road was the most likely source of recolonising grasshoppers. More isolated heathland sites may find that recolonisation after overgrazing is slower or for sedentary species (e.g. mottled grasshopper) does not occur at all. Sampling of grasshopper abundance using 2 × 2 m quadrats revealed an extremely high density of 3∙5 adult grasshoppers per m2 on the former pony grazed heathland compared with only 1∙2 per m2 in the heathland outside of the Forest on the south side of the road. Densities of over 3 adult grasshoppers per m2 are relatively rare in East Anglia and indicate grassland and heathland of high importance for Orthoptera (Gardiner, 2010). Therefore, the restriction of pony grazing by SWT appears to be having the desired effect on the grasshopper population and could be applied elsewhere (e.g. New Forest) where excessive pony grazing is damaging to invertebrates (Gardiner, 2014). It is important to remember that livestock grazing is an important tool in managing heathlands for conservation and possibly the best option for creating heterogeneity in sward structure. However, monitoring of grazing is important to determine whether the desired outcomes are being achieved. To this end Orthoptera (particularly grasshoppers) represent an ideal group to study in response to changes in grazing management as it appears they response quickly to conservation interventions. References Denton, J. (2006). Assessment of potential effects of different grazing regimes in Wootton Coppice and Holmsley inclosures. Unpublished report. Gardiner, T. (2010). Essex Orthoptera update for 2009 including an assessment of heathland restoration at Tiptree Heath and Norton Heath Common. Essex Naturalist (New Series) 27: 77–82. Gardiner, T. (2012). Rediscovery of the woodland grasshopper Omocestus rufipes in East Suffolk. Transactions of the Suffolk Naturalists’ Society 47: 53–54. Gardiner, T. (2013). Grasshoppers of the Sandlings heathlands. Transactions of the Suffolk Naturalists’ Society 49: 23–32. Gardiner, T. (2014). The Crickets on the Heath. Country-Side 33 (8): 17–19. Gardiner, T. & Haines, K. (2008). Intensive grazing by horses detrimentally affects orthopteran assemblages in floodplain grassland along the Mardyke River Valley, Essex, England. Conservation Evidence 5: 38–44. Pinchen, B. J. (2000). Evaluation of five inclosures in the New Forest for invertebrate conservation and potential impact of grazing. Unpublished report. Tubbs, C. R. (1986). The New Forest. Collins, London. Tim Gardiner Environment Agency, Iceni House, Cobham Road, Ipswich, Suffolk IP3 9J timgardiner134@btinternet.com