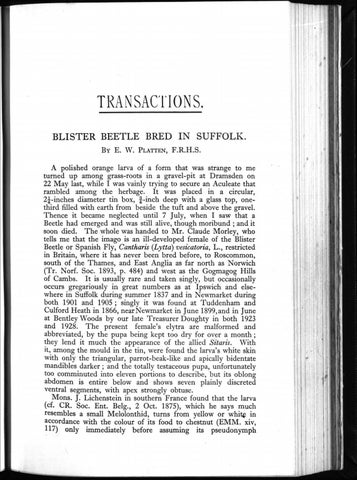 A polished orange larva of a form that was strĂ¤nge to me turned up among grass-roots in a gravel-pit at Dramsden on 22 May last, while I was vainly trying to secure an Aculeate that rambled among the herbage. It was placed in a circular, 2j-inches diameter tin box, f-inch deep with a glass top, onethird filled with earth from beside the tuft and above the gravel. Thence it became neglected until 7 July, when I saw that a Beetle had emerged and was still alive, though moribund ; and it soon died. The whole was handed to Mr. Claude Morley, who teils me that the imago is an il-developed female of the Blister Beetle or Spanish Fly, Cantharis (Lytta) vesicatoria, L., restricted in Britain, where it has never been bred before, to Roscommon, south of the Thames, and East Anglia as far north as Norwich (Tr. Norf. Soc. 1893, p. 484) and west as the Gogmagog Hills of Cambs. It is usually rare and taken singly, but occasionally occurs gregariously in great numbers as at Ipswich and elsewhere in Suffolk during summer 1837 and in Newmarket during both 1901 and 1905 ; singly it was found at Tuddenham and Culford Heath in 1866, near Newmarket in June 1899, and in June at Bentley Woods by our late Treasurer Doughty in both 1923 and 1928. The present female's elytra are malformed and abbreviated, by the pupa being kept too dry for over a month ; they lend it much the appearance of the allied Sitaris. With it, among the mould in the tin, were found the larva's white skin with only the triangular, parrot-beak-like and apically bidentate mandibles darker ; and the totally testaceous pupa, unfortunately too comminuted into eleven portions to describe, but its oblong abdomen is entire below and shows seven plainly discreted ventral segments, with apex strongly obtuse. MĂśns. J. Lichenstein in southern France found that the larva (cf. CR. Soc. Ent. Belg., 2 Oct. 1875), which he says much resembles a small Melolonthid, turns from yellow or whitf in accordance with the colour of its food to chestnut (EMM. xiv, 117) only immediately before assuming its pseudonymph

condition wherein it hibernates, resuming its white but quiescent larval form in mid- April; on 30th the true pupal State was assumed, and imagines emerged on 23 May (I.e. xvi, 34). The active larva feeds on Bees' grubs and honey stored in Eldertwigs ; but, more naturally it is supposed (I.e. xvi, 70), on those of the subterranean genera Andrena and Halictus, which would account for its discovery at grass-roots in the present case. My larva was very sluggish and about to pupate ; it was of a dull orangeyellow colour and about one inch in length, or rather longer if fully expanded ; its shape was elongately cylindrical and similar to the Wireworm-larvae of Skipjack-beetles (Elaterid.ee), though as much as A-inch in diameter ; its tuft of quite rough grass was overhanging the vertical face of the pit. Species of the allied genus Hornia are well-known to attain their perfect strueture in autumn, but to remain quiescently enclosed in their two larval and one pupal cast skins until the following spring's warmth impels emergence : in both U.S.A. and north Africa, where they inhabit a solidly walled-in cell at the inner extremity of nests of the British bee-genus Anthophora, which are there some six inches below the ground's surface.

Seventeen years ago I was a pupil in Edward John Singleton Smith's school, St. Margaret's College in Lowestoft. I remember him intimately, enjoyed the pleasure of accompanying him on many a ramble in quest of Insects in all Orders, and to him I shall ever be indebted for directing and developing my innate love of Nature. One could not fail to be the richer from acquaintance with his kindly, courteous and intensely interesting personality : the late A. H. Patterson avows that, ' of all the Naturalists who have sat in my houseboat on Breydon Water, none was ever more entertaining than that lovable old bachelor Singleton Smith, entomologist and dominie.' Little is now known about parentage or early life, beyond his birth of a good Surrey family at Chobham during 1860, and that he early secured an assistant school-master's post, whence he saved enough cash to defray his fees at Durham University. Respecting the rough treatment there reeeived from his fellowstudents, he used to narrate how, in consequence of a lecture he gave upon their want of Observation and due regard for Natural History, he was taken in one of their river-boats and deliberately pitched into the mud near the Wear's bank, where he became encased in horrid feculent slime : " I presume I was punished for posing as a pedantic prig," he used to alliteratively add!

The Blister Beetle bred in Suffolk

The Blister Beetle bred in Suffolk