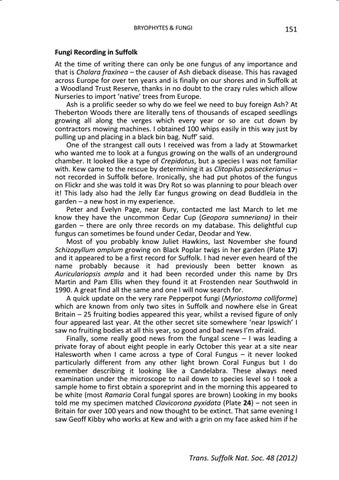 Fungi Recording in Suffolk At the time of writing there can only be one fungus of any importance and that is Chalara fraxinea – the causer of Ash dieback disease. This has ravaged across Europe for over ten years and is finally on our shores and in Suffolk at a Woodland Trust Reserve, thanks in no doubt to the crazy rules which allow Nurseries to import ‘native’ trees from Europe. Ash is a prolific seeder so why do we feel we need to buy foreign Ash? At Theberton Woods there are literally tens of thousands of escaped seedlings growing all along the verges which every year or so are cut down by contractors mowing machines. I obtained 100 whips easily in this way just by pulling up and placing in a black bin bag. Nuff’ said. One of the strangest call outs I received was from a lady at Stowmarket who wanted me to look at a fungus growing on the walls of an underground chamber. It looked like a type of Crepidotus, but a species I was not familiar with. Kew came to the rescue by determining it as Clitopilus passeckerianus – not recorded in Suffolk before. Ironically, she had put photos of the fungus on Flickr and she was told it was Dry Rot so was planning to pour bleach over it! This lady also had the Jelly Ear fungus growing on dead Buddleia in the garden – a new host in my experience. Peter and Evelyn Page, near Bury, contacted me last March to let me know they have the uncommon Cedar Cup (Geopora sumneriana) in their garden – there are only three records on my database. This delightful cup fungus can sometimes be found under Cedar, Deodar and Yew. Most of you probably know Juliet Hawkins, last November she found Schizopyllum amplum growing on Black Poplar twigs in her garden (Plate 17) and it appeared to be a first record for Suffolk. I had never even heard of the name probably because it had previously been better known as Auriculariopsis ampla and it had been recorded under this name by Drs Martin and Pam Ellis when they found it at Frostenden near Southwold in 1990. A great find all the same and one I will now search for. A quick update on the very rare Pepperpot fungi (Myriostoma colliforme) which are known from only two sites in Suffolk and nowhere else in Great Britain – 25 fruiting bodies appeared this year, whilst a revised figure of only four appeared last year. At the other secret site somewhere ‘near Ipswich’ I saw no fruiting bodies at all this year, so good and bad news I’m afraid. Finally, some really good news from the fungal scene – I was leading a private foray of about eight people in early October this year at a site near Halesworth when I came across a type of Coral Fungus – it never looked particularly different from any other light brown Coral Fungus but I do remember describing it looking like a Candelabra. These always need examination under the microscope to nail down to species level so I took a sample home to first obtain a sporeprint and in the morning this appeared to be white (most Ramaria Coral fungal spores are brown) Looking in my books told me my specimen matched Clavicorona pyxidata (Plate 24) – not seen in Britain for over 100 years and now thought to be extinct. That same evening I saw Geoff Kibby who works at Kew and with a grin on my face asked him if he

knew what ‘this’ was off hand. Straight away he proclaimed it to be the Candelabra fungus, not seen in Britain since the well known mycologist Carlton Rea painted it back in 1896. Within ten seconds he was on his mobile to phone Kew to say it has been rediscovered. My sample is now safe in the National Herbarium. Neil Mahler 10 Riverdale Court King George’s Avenue Leiston Suffolk IP16 4JU