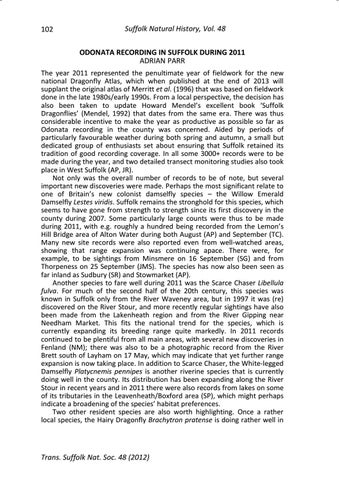 The year 2011 represented the penultimate year of fieldwork for the new national Dragonfly Atlas, which when published at the end of 2013 will supplant the original atlas of Merritt et al. (1996) that was based on fieldwork done in the late 1980s/early 1990s. From a local perspective, the decision has also been taken to update Howard Mendel’s excellent book ‘Suffolk Dragonflies’ (Mendel, 1992) that dates from the same era. There was thus considerable incentive to make the year as productive as possible so far as Odonata recording in the county was concerned. Aided by periods of particularly favourable weather during both spring and autumn, a small but dedicated group of enthusiasts set about ensuring that Suffolk retained its tradition of good recording coverage. In all some 3000+ records were to be made during the year, and two detailed transect monitoring studies also took place in West Suffolk (AP, JR). Not only was the overall number of records to be of note, but several important new discoveries were made. Perhaps the most significant relate to one of Britain’s new colonist damselfly species – the Willow Emerald Damselfly Lestes viridis. Suffolk remains the stronghold for this species, which seems to have gone from strength to strength since its first discovery in the county during 2007. Some particularly large counts were thus to be made during 2011, with e.g. roughly a hundred being recorded from the Lemon’s Hill Bridge area of Alton Water during both August (AP) and September (TC). Many new site records were also reported even from well-watched areas, showing that range expansion was continuing apace. There were, for example, to be sightings from Minsmere on 16 September (SG) and from Thorpeness on 25 September (JMS). The species has now also been seen as far inland as Sudbury (SR) and Stowmarket (AP). Another species to fare well during 2011 was the Scarce Chaser Libellula fulva. For much of the second half of the 20th century, this species was known in Suffolk only from the River Waveney area, but in 1997 it was (re) discovered on the River Stour, and more recently regular sightings have also been made from the Lakenheath region and from the River Gipping near Needham Market. This fits the national trend for the species, which is currently expanding its breeding range quite markedly. In 2011 records continued to be plentiful from all main areas, with several new discoveries in Fenland (NM); there was also to be a photographic record from the River Brett south of Layham on 17 May, which may indicate that yet further range expansion is now taking place. In addition to Scarce Chaser, the White-legged Damselfly Platycnemis pennipes is another riverine species that is currently doing well in the county. Its distribution has been expanding along the River Stour in recent years and in 2011 there were also records from lakes on some of its tributaries in the Leavenheath/Boxford area (SP), which might perhaps indicate a broadening of the species’ habitat preferences. Two other resident species are also worth highlighting. Once a rather local species, the Hairy Dragonfly Brachytron pratense is doing rather well in

England at the moment, and 2011 continued its run of strong showings in the county, with several records from the west where it was unknown not too many years ago. The other species is the Variable Damselfly Coenagrion pulchellum. Unlike many of Britain’s dragonflies, this species is doing less well on a national scale and may even be in decline in some areas. Fortunately 2011 saw records from all of its main localities in the county, i.e. the Waveney Valley, Minsmere, Lakenheath and a small site near Culford/West Stow. Finally, 2011 was to be quite an exciting time for migrant dragonflies in the UK, with the highlight being the largest ever recorded arrivals of Vagrant Emperor Anax ephippiger. Unfortunately, Suffolk was to miss out on this – though a sighting from the Library Gardens in Great Yarmouth during October was only a few hundred yards over the v.c.25 (East Suffolk) boundary. Other migrant species did however make it to the county, with e.g. a female Redveined Darter Sympetrum fonscolombii being noted at Bradwell on 2 July (KK). I would like to thank all those recorders who sent in records; their contribution to our growing understanding of Suffolk’s dragonflies is much appreciated. The following individuals have been identified in the text by their initials: T. Caroen (TC), S. Gant (SG), K. Knights (KK), N. Mason (NM), J. Mumford-Smith (JMS), A. Parr (AP), S. Piotrowski (SP), S. Read (SR), J. Robinson (JR). Further contributions are always welcome, particularly from those in the centre and far west of the county! References Mendel, H. (1992). Suffolk dragonflies. Suffolk Naturalists’ Society, Ipswich. 159pp. Merritt, R., Moore, N. W. & Eversham, B. C. (1996). Atlas of Dragonflies of Britain and Ireland, HMSO. 149pp. Adrian Parr 10 Orchard Way Barrow Bury St Edmund Sufolk IP29 5BX adrian.parr@btinternet.com

ODONATA RECORDING IN SUFFOLK DURING 2011

ODONATA RECORDING IN SUFFOLK DURING 2011